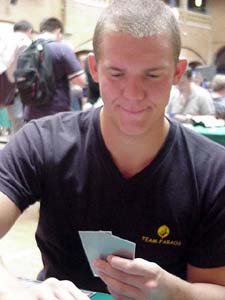 Five minutes before the decklists for the Standard portion of the 2002 European Championship had to be handed in, Svend Geertsen was given a blue and green madness deck made by the other Danes. Quite a few hours later, the 21-year-old had played that deck well enough to secure himself a spot in the Top 8 playoff. "I haven't played since Nice," Svend reveals.

The sports student didn't have much time to prepare for the event. Instead, he had to concentrate on several exams over the past weeks, and he didn't get his summer vacation until the Monday before the European Championship. In fact, he only played one single draft with Judgment before the tournament. "There were lots of Judgment cards I hadn't played, so I was happy we weren't using them for Type II," Svend says, and explains that he didn't even know all the cards. In fact, Svend didn't playtest much before 2002 Pro Tour-Nice either, but he made the Top 8 there as well. "If I playtest, then I do badly," he chuckles, and while that may or may not be correct, at least Geertsen has made a definite comeback after being more or less absent from the Magic scene for a while.

In spite of the Limited playtesting, the Magic veteran managed to go 6-1 in the draft portion during day one of the tournament. That put him in an excellent position before the second day. And during the Standard portion, Svend didn't lose a single match. He went 4-0-3, intentionally drawing twice, which was enough to send him into the playoff as the sixth seed. "I didn't really expect anything. I went here just to have fun," the Dane says, happy to finally make the Top 8 in a European Championship. Three times before, he lost in the last round of the Swiss only to find himself finishing at 9th, at 11th and at 12th.

While Svend is one of the veterans of Magic with four Pro Tour Top 8 finishes under his belt, he has yet to win an international tournament. "Becoming the European Champion would mean a lot to me. I have never won a big tournament except from the Danish Nationals," he says. In the quarterfinals, he is paired up against Victor van den Broek from the Netherlands, who sports an aggressive red and green deck. "It should be a good matchup," he says, referring to his four main deck Roar of the Wurms.

Still, Geertsen refuses to have any great expectations before the playoff. "I take one match at the time, but I will do my best," he smiles. However, the Dane had no intention of playtesting the matchup or getting any rest before the quarterfinals. "I go to the Euros every year, and it is always fun. We are a bunch of people, and a lot of Danes that stay for a while. This is one of the most fun tournaments, and if I stay at home and go to bed early, I will be disappointed if I lose. But if I party, at least I can say "I had fun last night". You know, you have to bring an umbrella. Then it won't rain."

4 Roar of the Wurm 2 Gainsay