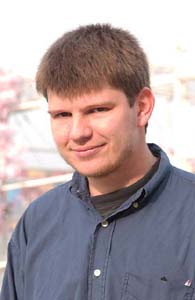 Pro Tour Competitor Sylvain Lauriol hails from Bagnals Sur Ceze in France. This is his 4th Pro Tour event, though he's been well traveled throughout the world. In fact, he once attended Worlds as a member of the Scottish team! Of course, he was in University there at the time, so it can be excused. Now, he shows up at French institutions of higher learning, but the result is the same: he's finishing highly at tournaments that count.

Lauriol chose to run a Blue/Green deck which featured multiple Threshold and Madness cards, such as Seton's Scout, Basking Rootwalla, and Werebear. "He is a kind and generous soul", said Mark Rosewater, when asked about Larioul. One would debate whether beating down with 4/4 and 4/3 creatures for two mana would be kind, but they would generously deal massive amounts of damage to any opponent!

Of the four Frenchmen, Lauriol is considered the underdog. Ruel has proven himself multiple times on the Grand Prix circuit, Olivieri finished second at the team Pro Tour, and rookie Haim has nothing to prove, having already impressed everyone by breaking into the top 8 in his first Pro Event. That leaves Sylvain as the lone French player who must win out in order to make a name for himself. Will he find the courage and strength within himself to rise to the top of the stack?