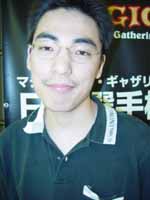 Tooru Maegawa burst onto the stage like a comet at this year's National Championship. While this is his first major appearance, he's actually been playing since the beginning, starting with a Japanese 4th Edition Starter pack 7 years ago. All the years of practice have paid off this weekend, with a Top 8 finish and a chance to take a National title for the 23-year old college student.

The deck Maegawa fielded at the Toukai Regionals in April, buildt around Verdant Succession, drew a lot of attention for its uniqueness. People commented on his card selection, as he used a number of cards one sees more often in Limited than Constructed, such as Wirewood Savage and Leery Fogbeast.

When asked about his selection, Maegawa responded "I like strong fun decks, and I wanted to play using a deck I built rather than a net deck", making the brave choice to favor originality over consistency. The deck had somewhat mixed results, going 1-2 in the first Standard rounds, and 2-0-1 in the last three Standard rounds.

More than the performance of his rogue deck, what pushed Maegawa into the Top 8 was his perfect record at the draft tables.

When asked how he was able to go undefeated through two drafts, Maegawa said "I choose a color and stick with it. No matter what happens, I try to force that color." This strategy seems to have paid off. Choosing white as his color, mainly because of the potential payoff from powerful Scourge cards, Maegawa signaled early on that he was going for white, and was able to get it in both drafts, with a white-red deck in his first pod, and a white-black build in his second.

• Going For The Gold

In response to being asked about his chances in the Top 8, Maegawa humply commented "I'll do the best I can." That attitude has brought him to the threshold of national recognition. All that remains to be seen is if his original deck can take the field.

4 Living Wish 2 Call of the Herd