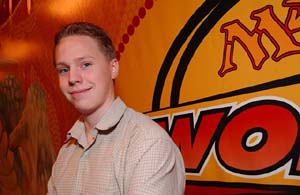 Ever had one of those weeks? The sun's always shining, the girl waits on your beck and call, you get a promotion with extended vacation time and everything is good with the world. Right now, that's what its like to be Tuomas Kontiranta.

It's a whole new world for this 18-year old Finn. Three months ago, it looked like he wouldn't be going to Nationals, let alone the top 8 of Worlds. Ranked thirty-third in Finland when the top thirty-two qualified for the National tourney, Tuomas managed to advance from the final qualifyer to Nationals, where a third place finish earned him a spot at Worlds. Once in, Tuomas had no time to playtest because of a summer job, but Finnish Champion Tomi Walamies and his Punisher teammates decided to furnish both the Swedish and Finnish teams with decks for Standard and Block constructed.

"I thought I'd be a good tourist", said the soft-spoken Kiontiranta of his pre-tourney chances at World Championships. A Fisherman, Snowboarder and rollerblader, Kontiranta has been playing competitively since Urza's Saga, but with his time split between so many hobbies, he'd been hard-pressed to find success up until now, with Worlds being his first Pro Tour and his only international success coming this year at European Championships, where he finishes forty-first.

More of a limited player than anything else, Tuomas willingly gives all the credit in the world to Walamies and his Punisher teammates for helping to get hi this far. Playing a red-blue-black Burning Wish-Psychatog deck in Standard, Tuomas went 4-2 in Standard before seing his plans in limited go awry. "I wanted to draft blue white" remembers Kontiranta "But in the first draft I opened Beast Attack and in the second I opened Kamahl (Pit Fighter), and I never got passed anything outside of red or green". Despite this inability to execute his plan, Tuomas won the limited portion of the tournament, going 6-0 on the day. Finally, playing Punisher's blue-white Quiet Speculation deck, he managed the 3-2-1 record he needed to make day five.

Now, everything changes for Tuomas as far as Magic goes. Fresh of his success here and feuled by his new success and fiscal security most high schoolers can only dream of, Kontiranta is ready to do a lot of travelling for his new number one hobby, and you can't really blame him: the sun is shining, the girl is waiting on his beck and call, and he's in the Top 8 at World Championships. Everything's good with the world.