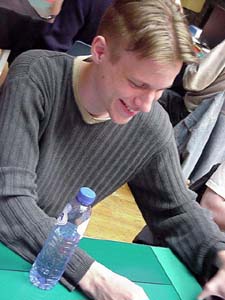 I got to interview this relaxed Dutchman, with a very warm character. Inspite of just finishing his last round there was no sense of nervousness or pumping adrenaline. In fact he got paired up against fellow countryman Jeroen Remie, which both men regretted, since only one of them could finish in Top 8.

Victor played like a bomb on Friday, finishing the seven rounds with a perfect record. He entered day two with a red-green beatdown deck that seemed like a very good choice for the metagame. Roar of the Wurm proved a big problem for his deck, and that will be his biggest fear tomorrow, as he suspects most players in top eight will play them. His only losses were to Marco Lombardi, Anton Jonsson and Amiel Tenenbaum, who will all attend tomorrow's Top 8.

What is interesting is that Victor, who was previously uninvited to attend Worlds in Australia, will now earn enough money to at least pay for the expensive flying ticket as even a minimum eighth place grants a $1.500 fee. At 21, Victor has been playing Magic for eight years. His first Pro Tour appearance was in Mainz back in 1997. The following year he finished ninth at the European Championships, so this year feels especially good, making up for falling out of Top 8 back then. At Worlds 1998 he finished in 48th place.

His hopes for the upcoming Worlds Championship are still distant, as he did not even decide to enter the EC until last Monday. But he looks confident enough to pull off a stunt. However, with an exam period and a planned holiday coming up there may not be sufficient time to practice for worlds. That being said, he seems to do just as well without, which he has proven today. The new environment with Judgment may very well turn around the whole environment in both Standard and Block Constructed. Fortunately he has online help of good friends such as Kai Budde and Gary Wise.

Asked what he liked the least about the past two days he could think of only one thing: the organisation of the draft. It appeared that the cards for the draft had been marked as the stamps were not given enough time to dry. The players then had to be offered a pack of sleeves to sort the problem. Still the seeing of so many friends and his place in top eight made him very happy he decided on the last minute to enter the European Championship.