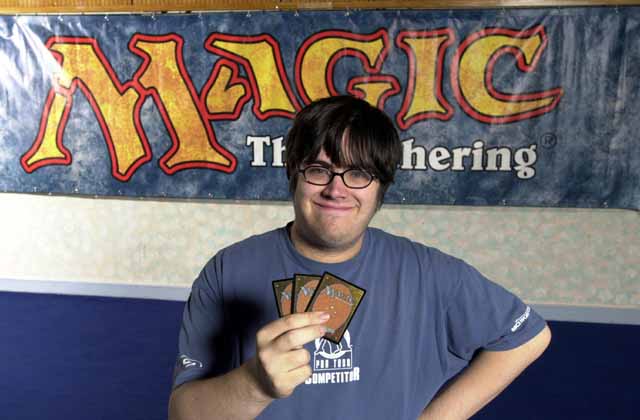 Q: What made you decide to come to Grand Prix Manchester?
A: The increased prize funds helped, but the Masters Series was the key; I'm on the bubble, so this trip was worth it if I got even one PT Point. That and Invasion's a ton of fun.

Q: What were your expectations going into this tournament, and why?
A: I expected to make the second day due to my byes, and I figured it was Rochester so I had a good shot.

Q: Briefly describe your tournament play-wise so far, both day one and day two.
A: Day one I had a really cool W/U/B control deck; it practically built itself. Day two I drafted a W/U deck in a first co-operative Rochester, and had to fight for a U/B one in the second one.

Q: What do you think about the tournament location-/organisation-wise?
A: Location and organization were great.

Q: What do you think is the main reason for you making top 8 in this tournament, and why?
A: Three byes and a good Sealed Deck helped, but I feel I'm here because of a very good first Rochester and outplaying my opponents.

Q: What does this top 8 performance mean to you?
A: Hopefully that my top 16 curse is broken, but it's definitely at least three less PT Points I need for third Masters. Three down, nine to go.

Q: What are your predictions for the Top 8?
A: We Americans will finish what we started - after it's done, we'll fly home. If I had to pick someone, I'd pick Darwin.