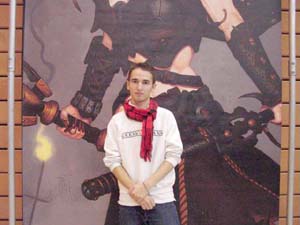 Bruno Carvalho is one of two Swiss players in the top 8. Both he and Daniel Madan hail from Lausanne and they test regularly at "La Guilde". This regular testing has paid dividends for the 21-year-old student of Geométre as this year has seen some good results for the Swiss player. He made the top 8 of the Swiss Nationals and also is in the fortunate position of actually being able to qualify for the amateur prize twice as he picked up money for finishing 37th at the last European Grand Prix in Genova. This time he does lose the amateur status and finally gets to go to the Pro Tour after coming close in a number of Qualifiers.

Carvalho ascribes his success to putting a lot of work in recently. For instance in Onslaught block he did a lot of testing on Magic Online and this helped him to his finish in Genova. The same is true for Mirrodin as he has been trying to put in 3 drafts a day. He likes the Affinity mechanic in Mirrodin but thinks one of the reasons he's been successful today is because he picks creatures a lot more highly than other players. While some decks were trying to struggle with around 12 creatures in Kansas he always tries to aim for somewhere in the region of 14 to 16. He tends to avoid black, although he 3-0'd his first pod with that colour, but mainly in Rochester tries to react to what his opponent plays. 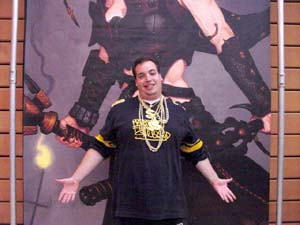 Remie brings perhaps the most impressive resume to the table. The Dutchman from Tilburg has had an explosive year. He top 8'ed at Pro Tour Houston and then followed that up with a top 8 finish at the 2003 World Championships. Remie hadn't exactly come out of nowhere as he'd managed 10th and 11th place finishes before then, but as he told me "nobody tends to remember the top 16 finishes". Up until then he'd been "flying under the radar". Despite this GP's had been less of a success story as he'd failed to make a Day two up until Atlanta this year. That has given him some confidence and he felt comfortable with the format. Lyon marks his first top 8.

One of the reasons he feels confident with Mirrodin is that he thinks players don't draft creatures highly enough. He feels most of the equipment, with the exception of Bonesplitter and Loxodon Warhammer, is pretty bad and that creatures are more important. Colours aren't so important, although he doesn't like black, but getting the creatures is the key.

"We had a party recently at Victor's and the theme was pimps and ho's. The chains all kind of got left there. Victor said he'd wear them for New Orleans. I said that wasn't anything, I'd wear them at the next GP. I was only supposed to wear them for the first five rounds, but when I took them off I lost, so I put them back on. The same happened this morning. I lost the first round, so I put them on and kept winning. We Magic players are fairly superstitious." 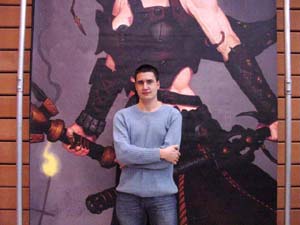 Jelger Wiegersma is the other player, also from The Netherlands, to bring an impressive resume to the top 8. Always a strong Dutch player he broke out with a Semi-Final appearance at Pro Tour New Orleans and then went on a rampage through the Grand Prix circuit with Top 8 finishes all over the place. When I asked him about the new end of year payouts he said he preferred that as his 4-8 Masters record was less than stellar.

Currently the 21-year-old student from Eindhoven plays regularly in Drafts on Tuesday and Wednesday nights. He used to play Magic Online but doesn't have a net connection at the moment. The tournaments are usually organised by lowlandgames.com and are split between both Eindhoven and Remie's home, Tilburg.

I asked him about future players to look out for from the Netherlands and he mentioned Thijs Wessels (who also had a good run this tournament) and current Dutch Champion Rogier Maaten.

With Mirrodin Wiegersma is also another player who attaches much importance to creatures. He likes his opponents when they drop a lot of equipment and no creatures. While he has no particular color preferences he feels you have to take either red or green as they are the main artifact removal colors. 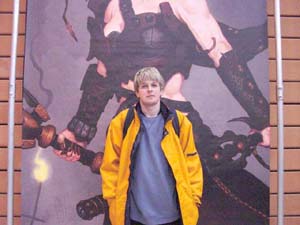 Kevin Desprez is one of four French players to make the Top 8. The 22-year-old English student is in the fourth year of study. One of the reasons he likes Grand Prix as it gives him an opportunity to practise English when he seldom gets a chance otherwise. He made Pro Tour Chicago earlier this year but had a horrible tournament. He still felt it was a good experience. He classes himself as more of a PTQ player. The Pro Tours are something different although he is looking forward to Amsterdam. He is glad to qualify as while he normally judges, he wanted to play the qualifiers this time round. Now he's qualified he can judge some of those tournaments instead.

He practises regularly with another Top 8 player: Loic Degrou. And the pair are a number of players who play around at Degrou's in Lille. He likes Mirrodin as it's really different. The presence of lots of artifacts means you don't have to define colors so early. On random tables he is happy to take the best cards, even if it might leave him with a three colour deck. As it was he and Derou sat together in the final draft and they were able to share red. He didn't like playing his friend in the penultimate round but happily Degrou went on to win the last anyway. 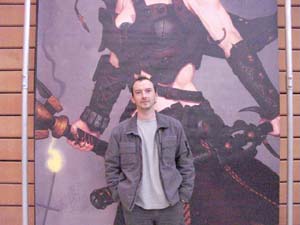 Like Desprez, Loic Degrou also hails from Lille in the north of France. The 30-year-old train driver has 3 Pro Tour appearances to his name but unfortunately none of those saw him competing on day two. He's been playing for nine years, ever since Legends, and is kind of the gaming centre in Lille. He thinks the success of Lyon is mainly because it is easily accessible for most of the people in France and that is also the Children's holiday.

He thinks one of the reasons he's done well is that he'd played three PTQ's and practised a lot so he knew which cards were good. He has a different approach to the other players in this Top 8 in that values equipment more highly than creatures. 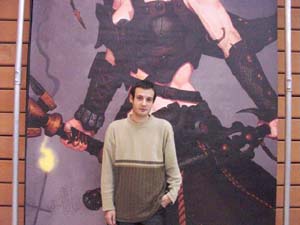 Sebastien Bernaud is a 22-year-old History Student from St Ettiene. He's been playing for around 6 years. This is his best ever performance. Before that there was only a 50th place finish in this year's French Nationals. He tries to play regularly with friends every weekend.

His strategy was to mainly draft blue and support it with red. 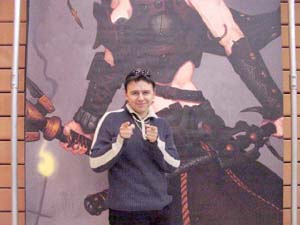 Daniel Madan turned out to be the revelation of the tournament. The 17-year-old, also from Lausanne, Switzerland, had only one bye, yet managed to rack up a fantastic 12-0 record before safely drawing in and then conceding to let his friend Carvalho in also. Like Carvalho he made his first mark with a day two appearance in GP Genova. He doesn't play Magic Online but does try to draft every couple of days.

I asked him if Swiss magic is on the verge of taking off and he said it seemed likely. A Grand Prix in Switzerland would help as they are currently trying to generate a larger Magic community in Switzerland and it would help.

He likes Mirrodin as he feels a skilful player can get a result in Sealed without opening a broken deck. In draft he feels the main proble is with the shortage of creatures and they need to be drafted highly. He noticed the decks in Kansas had 10-12 creatures and that doesn't feel enough.

His preference is to go for red as it feels the most powerful colour and he tries to go into it if the opportunity presents itself. I asked him if he feels confident about doing well in Amsterdam but he isn't sure. The first few rounds in the Grand Prix are quite easy as players are mainly playing for fun. At a Pro Tour "everyone you play you know they are going to be good." 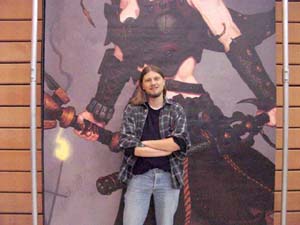 Yann Hamon did well a long time back with a few Pro Tour top 16's but then fell below the radar for a while. In London the 25-year-old teacher stormed back all the way to the final with his unconventional deck before being taken to pieces by Ostrovich's Goblins. Now, barely a couple of months later he's back in the top 8. Last time he felt his succss was because he tested and got the right matchup. This time he feels like he's been a little more lucky, although he thinks he understands the format. He prizes removal, especially artifact removal highly. The few instants when you get them are very good. He likes Mirrodin as while the construction is a little easier the games are interesting.

I alo asked him why Magic is doing so well in France at the moment. Having 770 players turn up for a tournament is incredible. He isn't really sure. While the French have a lot of top Pro's, there is a gulf between them and the rest. Often the standards in PTQ's isn't always that high.

I asked him if felt confident for New Orleans and he wasn't sure. He's done some testing with Nicolas Labarre and they have something but the openness of the extended format will make the tournament difficult.