After 12 rounds of swiss in the San Diego Convention Center, the top eight for 2003 U.S. Nationals has been decided. 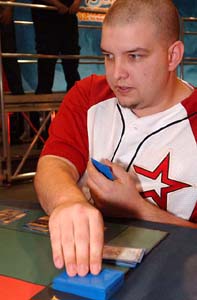 Neil Reeves1st Seed - Neil Reeves – Neil, one of the finest players on the Pro Tour and especially renowned for his limited skills, is perhaps best known for his southern drawl and confident swagger. After finishing in the Top 8 at Pro Tour San Diego, he reached the Top 4 of the last teams PT along with Gary Wise and Bob Maher. He was also recently declared the champion of the Event Horizon's Invitational.

2nd Seed – Brian Kibler – Brian's name was on everyone's lips this weekend; after a 6-0 start on Friday, he won his first three rounds on Saturday to assure his presence in the Top 8. During rounds ten and eleven he conceded back to back matches against Neil Reeves and Jon Finkel; perhaps to build a Stronger U.S. team, perhaps to put favorable matchups into the top 8 with him. Despite never having won a Pro Tour, Kibler's consistency as well as his proficiency in deck building credits him as one of our nations best.

3rd Seed – Jon Finkel – There is little that could be said about Jon Finkel that has not been said a thousand times already. Now entering his fourth U.S. Nationals Top 8, his comeback in this event makes clear again that any who believed the game had passed him by were sorely mistaken. After being 2-2, Jonny Magic won an impressive six rounds in a row before a concession from Brian Kibler in Round 10 ensured his return to the Top 8. One of the greatest ever, his matches will assuredly draw the most attention from the fans. 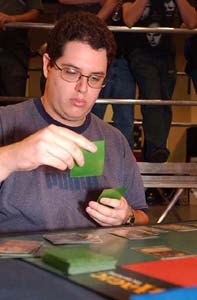 Michael Turian4th Seed – Michael Turian – Mike Turian is one of the best-liked personalities on the tour. His easygoing demeanor and constant smile ensured that the cheers for his top 8 announcement were among the loudest. Mike is the senior member of team CMU, having teamed with such luminaries as Randy Buehler, as well as winning a Team Pro Tour with Gary Wise and Scott Johns.

5th Seed – Gabe Walls – One of the least well-known members of this extremely experienced top 8, Gabe has played in a half dozen Pro Tours, but has yet to win a single dollar. While that streak will certainly come to an end this event, the question remains whether Walls relative inexperience in big matches will hinder his progress through a sea of Red-Green matchups that his Rift/Slide deck should dominate.

6th Seed – Justin Gary – Justin has won this tournament once already in 1997, becoming the head of the first U.S Team to fail to take home the Worlds team title. The eventual champions that year, the Canadians, included a young Michael Donais, who also happens to be the head judge of U.S. Nationals 2003. Justin recently won Pro Tour Houston, finishing 1-2-3 with his Your Move Games teammates Rob Dougherty and Darwin Kastle.

7th Seed – Joshua Wagener – Wagener's only previous finish of note was at the most recent Grand Prix Boston, where he made the top 8. That event was won by Brian Kibler – Wagener's quarterfinals opponent here. 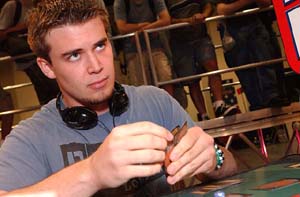 Brian Kibler8th Seed – Jordan Berkowitz – Despite being only 17 years of age, this is Berkowitz's second recent Top 8 after a recent high finish at PT Venice. Berkowitz's finish was in doubt up until the last second when his name was announced in eighth place to the disappointment of Tom Guevin, who barely missed in 9th place.

1 vs.8 – Neil Reeves vs. Jordan Berkowitz
Jordan is the heavy favorite in this match, with his Red/Green Deck being very well tuned to beat Reeves' UZI deck (Upheaval – Zombie Infestation.)

2 vs. 7 – Brian Kibler vs. Joshua Wagener
Wagener will get his revenge for GP Boston as his Red/Green deck should make quick work of Kibler's Zombies in another lopsided quarterfinal match.

3 vs. 6 – Jon Finkel vs. Justin Gary
Finkel will likely prevail in this matchup of previous National Champions, as his Zombie deck should easily make quick work of Gary's Mono-Black Control, the match up becoming even better after sideboarding. 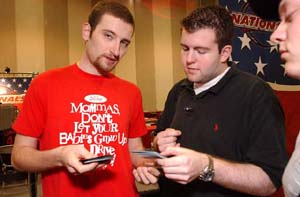 Jon Finkel4 vs. 5 – Michael Turian vs. Gabe Walls
Of the three Red/Green decks in the Top 8, Mike Turian draws the short straw as his chances of defeating Gabe Walls and his Rift/Slide deck are extremely slim. Along with the Finkel/Gary match, this should also be a quick affair.

Gabe Walls vs. Jordan Berkowitz
This should be another Red/Green deck and another victory for Gabe Walls as he continues his decks dominance of aggressive decks in this tournament.

Jon Finkel vs. Joshua Wagener
A heartbreaker for kids everywhere, Jon Finkel's Zombies will stand no Match to Wagener's Red/Green Deck. Jon's superlative skill will make the match close, but Jon will be sent to the consolation match to ensure his place on the national team. 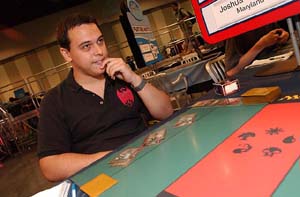 Justin GaryJon Finkel vs. Jordan Berkowitz
Jon's Top 8 will likely have a disappointing end as his loss to a second consecutive Red/Green deck will finish him in a bittersweet 4th place.

Gabe Walls vs. Joshua Wagener
In a surprising finals matchup, Gabe Walls's Rift/Slide Deck will continue its dominance by beating his third consecutive Red/Green deck and crown him our national champion.