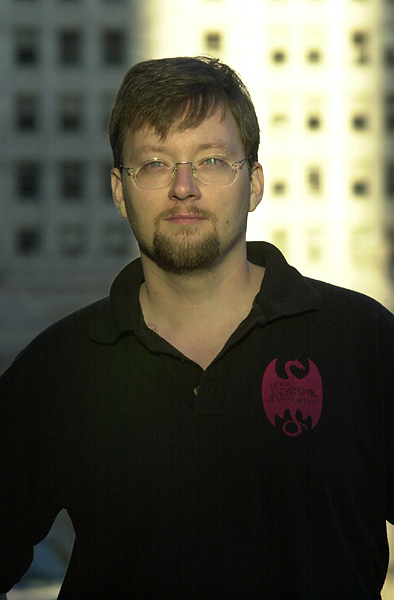 The game store owner and premiere tournament organizer of New England went 10-2-2 in the swiss portion of 2000 Pro Tour Chicago to make it into the top 8 as the sixth seed. He had chosen to play one of the major deck archetypes, Fires of Yavimaya. "Before States, which I ran, I predicted that Fires and rebels would be the most powerful decks. I haven't played type II a lot, but there weren't any cards in the new set that were as good as Parallax Wave. And with all the other white four casting cost spells white got access to, it was nuts," Dougherty says.

Still, he chose to base his deck on the deck William Jensen used to become the Massachusetts States Champion instead of going the rebel way. Then his team spent a lot of time to tune the Fires deck. "The biggest difference is the Llanowar Elves, the jumpstart is so incredibly important that you can Earthquake the Elves away later in the game, it doesn't matter. We also added River Boas, which were vital to beat blue/white," Dougherty explains. His sideboard was heavily tuned against blue/white as well as Fires, with Flashfires, Earthquakes and Calming Verses.

The deck seemed to like him. Rob describes his Day 1 as 'unbelievable', he went 6-0-1 after starting with a draw in the very first round. "The rest of the day, I had some really bad matchups, but straight up I got good draws," he says. Dougherty also had a pretty good second day. He went 4-2-1, and his first loss in the tournament came when he played against one of the other Top 8 finishers, Jon Finkel. "I won Game 1, then I got rolled over in Game 2. Game 3 had this weird scenario. I got out an early [Saproling] Burst, and he got pretty low on life and was holding off with a couple of River Boas. So there was this long period of time where, had I drawn an Earthquake, I would have won the match. But I didn't get it in time."

Dougherty figures he is in a little bit of trouble in the playoff. "Kibler's deck should crush me. I'm fairly confident versus Blue Skies, and I'm confident against rebels - it depends, but if the deck is Plains-heavy, then that's good. Flashfires is a crippling card. If not, it's anybody's game," he thinks. Still, he knows that he has a chance. "I can win. The odds are against me, but I can beat everything basically 'if I mise," he smiles.