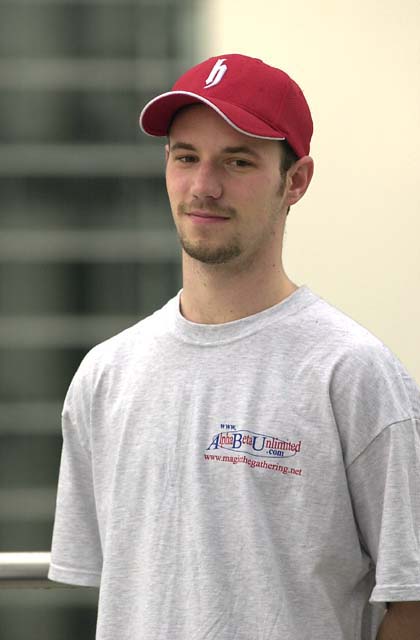 Even before coming to Tokyo, Ryan Fuller had an amazing streak. He came straight from winning Grand Prix Prague, losing only one single match throughout that tournament. In addition, he had won a five-round tournament before that. After going undefeated to make it into the Top 8 of Pro Tour Tokyo as the first seed as well as grinding into the Masters Series and then making it to the finals there, too, his streak is simply unbelievable. Says Ryan: "I've lost once in the last 39 matches. That's a lot of wins in a row. It feels unbelievable, unreal, It doesn't feel like it has happened yet. It's hard to step back and look at the whole thing."

The 21-year-old Canadian reckons that a lot of his success stems from him actually practicing. Fuller has his own apartment in Amsterdam, and the Ruel brothers, Franck Canu and Kamiel Cornelissen have all stayed there and playtested. At the moment, Ryan is a professional Magic player, and the last month has more or less been dedicated to Magic. Then add the fact that Lady Luck has smiled on him. "Whenever anyone made a mistake, I had the card to punish him," Ryan explains.

Naturally, the streak has made its impact on Fuller. He is very confident, and when he sits down, he is completely confident. "I knew I would do well when I came and saw the decks," Ryan reveals. "We had a large network with players in Austria, the States and France, so there weren't any surprises."

Fuller was one of four affiliates of the AlphaBetaUnlimited.com network that made the Top 8, an incredibly impressive record. The deck, however, was made in several places at once. Ryan made a version of the Overabundance deck along with Kamiel Cornelissen, and he e-mailed it to Chris Benafel. Without talking to each other, both the American section and Fuller eventually modified the deck to the version they played in the Pro Tour. With the exception of a few cards, the decks were similar.

"It doesn't lose to anything automatically," Ryan says about his deck. "When it loses, it's because you didn't draw well enough. You need to mulligan aggressively. I won three matches after I'd mulliganed to five." The knowledge of the deck and the understanding of the format was one of Ryan's definitive strengths in the tournament. So, doesn't he have any weaknesses at all? The question gets him thinking. It's hard to come up with a weakness when you've just had the best winning streak of your life. "The more I'm ahead at a game, the worse I play," he finally says. "I play way better when I'm in a losing position."

The Top 8 finish is Ryan's second. He made the Top 8 in 1998 Pro Tour Chicago as well. Other than that, he played in the team finals at 2000 Worlds, and this year only he has four Grand Prix Top 8 finishes, including the one victory from Prague. Now, he's looking for a Pro Tour victory as well. "I wanna win. The only matchups I don't want are David Williams and Zvi Mowshowitz. But I'll beat them anyways. It's my weekend," he smiles.