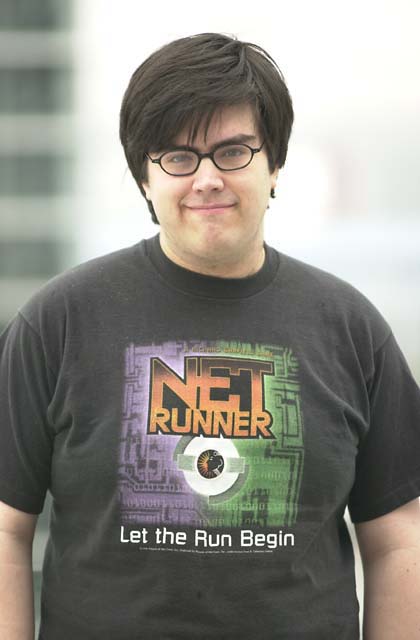 Zvi's optimism about both his excellent 7th seed performance and the deck seemed unbounded. This is Zvi's third Pro-Tour Top 8, so he is no stranger to success on the Pro-Tour. In addition, the Blue/White deck he played was one of the only unique decks at the event, a fact Zvi seems decidedly pleased by.

"John Ormerod showed us this deck he had made as a foil to Black/Red and Green/Red decks called 'notasbadasitlooks.dec' almost from the very beginning. It was almost just like it is today, with Crimson Acolytes in the main, and everything else. The deck is just wonderful. It's full of cards no one else would play and cards that make other decks miserable."

Zvi's hoping that this will finally be the Pro Tour where he is crowned champion. He came close at Pro Tour New York 1999, playing "Zero Effect," a bizarre Fluctuator deck that very nearly took him to the Finals. The favorite going into that Top 8, Zvi had mana problems in the Semifinals, and didn't quite make it in. He feels very confident in this Top 8.

"I think my chances are very good. We knew our deck would be even better in the Top 8 than it was in the rest of the tournament because our Meddling Mages become that much better. I'll know exactly what everyone is playing, and exactly what to name with the Mage every time."

Though a large handful of players played the deck, Zvi and teammate Brian Selden were the only ones to see strong successes with the deck, though nearly everyone made Day Two. "I know that I got pretty lucky. I had smooth mana draws all day long. If it continues in the Top 8, I'll be very happy. When I play against Green/Red, I think I'll be doing very well. I know that there might be some Kavu Chameleons, which can be very difficult to deal with. Basically a Chameleon is like another Kavu Titan, but I can't counter it. Other than that, though, I don't fear very much from them."

Just as Zvi felt he got lucky to be in the Top 8, many players felt that the format was very luck oriented. Consensus among many top players was that match wins at the Pro Tour were even more dominated by players winning by lucky draws in the mid-game, when nothing else was happening. "People might be noticing the top-decking more, but they're always looking for something to complain about. In the big matchups like Red/Green or Black/Red versus a similar deck, it's going to come down to both players drawing these powerful cards and just shooting rockets at each other. There isn't any more luck than usual. I like to call this 'Pro Tour Balanced.' This is the first time we've had a balanced Pro-Tour."

Zvi's hope is that his metagame deck will step in between the different expectations all of the players have, and have few ways to be attacked. With four Green/Red decks in the Top 8, he has high hopes for getting his first Pro-Tour Championship.