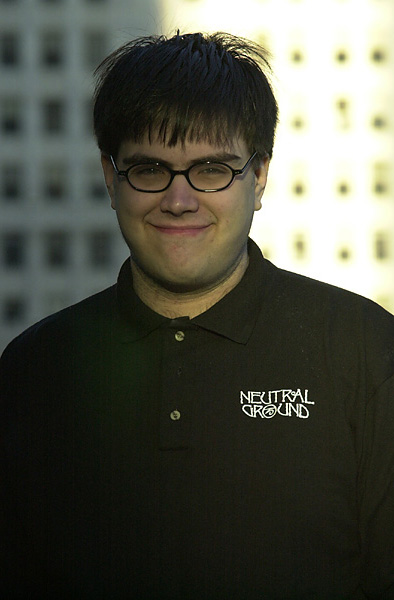 It's the eve of Zvi Mowshowitz's second Pro Tour Top 8, and the 21 year old Columbia University mathematics major is confident. "I think I made the right call. This is the deck," he says. Mowshowitz was 10-3 going into the final round of swiss competition, and needed a win to secure the coveted Sunday berth. He was paired against friend and fellow New Yorker Alex Shvartsman, who was out of contention for Top 8. Shvartsman conceded the match, putting Mowshowitz in 4th place overall.

Mowshowitz is one of five competitors taking red/green into tomorrow's competition. His version was developed with the help of Team Kobra Kai: Mowshowitz, Adrian Sullivan, Seth Burn, Brian Kowal, Scott Johns, Brian Selden, and Jake Janoska. What sets it apart from the other similar decks in tomorrow's field is not one, not two, but three main deck Two-Headed Dragons. I asked Zvi how this unusual tech came to be. "It was on the way to the Invitational. We were playtesting against green/white and getting wrecked by Blinding Angel. The Dragon was originally put in against that, and we realized it was just really good." Mowshowitz is also running more basic land than many of the competitors, along with two Dust Bowls. In fact, Mowshowitz got more and more excited during this interview as it seemed to dawn on him exactly how good his Dust Bowls may be. "I think I'm going to win games by Dust Bowling Brian Kibler out... only eight basic land. I can destroy him. Oh my God, those two Dust Bowls are golden!"

As for his chances tomorrow, Mowshowitz thinks he's about even with his first round opponent, Brian Kibler. Although he believes in the power of the Bowl, he is worried about the Armadillo Cloaks in Kibler's sideboard. He would prefer the match to be best of three, but unfortunately for Mowshowitz, the best of five match means that there could be up to four sideboarded games. "If he Cloaks up Rith, it's all over. If he Cloaks up a Jade Leech, it's not good," he admitted. When asked to comment on some of the other competitors' chances, Mowshowitz said, "I like Cornelissen's deck. If it were anyone but Finkel sitting across from him in the quarterfinals, I wouldn't even hesitate."

Mowshowitz's Magic resume includes 3rd place at Pro Tour - New York '99, 4th place at US Nationals '99, and four other Top 16's. His New York Top 8 led to the nearly legendary "Zvi Makeover," in which a bevy of hairdressers groomed the then-bearded Mowshowitz at 3 am in the ladies' room of the New York Armory. Mowshowitz also got a haircut for his camera appearance this time, although the transformation is not nearly as dramatic. When asked how today's makeover compares to his first, Mowshowitz said, "The sequel can never compare to the original. You know that."