At the Top of the Tree

Players have any number of measures by which to judge their progress in the game, whether it be winning a foil at Friday Night Magic, finally reaching parity of 3-3 at a PTQ, or maybe getting all the way to the Big Show. Whatever their level, there’s always something to strive for. The same is true in the judge community. From the first time you pull on the famous black and white stripes, every event is a learning experience that brings new challenges, situations, rules interactions, and almost certainly tales of aching feet—judges walk a LOT! 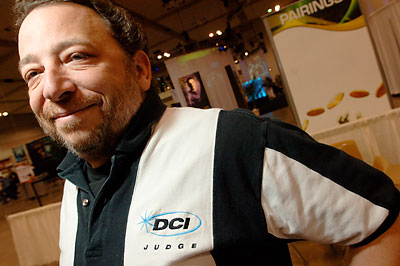 Sheldon Menery is one of only four Level 5 judges in the world.One of the greatest strengths of the DCI Judge Program is the system that sees fellow judges nurturing talent from around the world, carefully shepherding them through the levels in the community. When a respected judge reaches the pinnacle of the game, it’s a cause for celebration, and rarely has it been more deserved than when Italian Judge Riccardo Tessitori took the final step up from Level 4 to Level 5. I spoke with fellow Level 5 Sheldon Menery, a fixture on the Pro Tour scene, most recently as Head Judge for Pro Tour Berlin. I began by asking him just how rare this promotion is....

“There are only four Level 5s in the world right now,” said Sheldon. “There’s Toby Elliott, Jaap Brouwer from the Netherlands, myself, and now Riccardo. It doesn’t happen every day, that’s for sure.”

“Level 1s are the footsoldiers of the DCI. They’re there making all the decisions that make all the difference to the smooth running of thousands of events all over the world. Level 2s are the NCOs. Typically, they’ll be Head Judging events like Prereleases, and PTQs at a local or regional level. Once you hit Level 3, you’re kind of the Junior Officers. The focus between 2 and 3 shifts from an event focus to a community focus, since Level 3s are mostly responsible for a large region within their own country. In many ways, Level 3s are the most important, because they represent the pinnacle of the community, and a good Level 3 can grow a successful player base. Level 4s are your Colonels, typically Head Judging massive events like Grand Prix, and then Level 5s are your Generals, who mostly Head Judge Pro Tours and Worlds.”

So is Level 3 as far as most Judges get?

“It’s certainly the end of one journey, and the start of the next towards Level 5 is another long path,” allows Sheldon. “Level 5s lead the global Judge Program. We formulate and develop policy, we’re responsible for all training and resources globally. We’re definitely the Senior Management.”

As the Levels progress, the emphasis changes, with an ever-widening perspective on the global community. That can be a long, arduous journey from first finding out about the stack. So what is it that made Riccardo such a natural choice to join this most exclusive group? Sheldon is quick to respond: 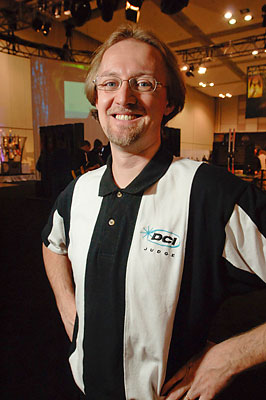 Newly minted Level 5 judge Riccardo Tessitori”Leadership. Riccardo has taken on the Italian Magic community—not just the judge community, but the player base as well—and has turned that country into a model of how to turn a disparate community into one where everyone is supportive of one another, climbing towards a common goal, and you only need to see the rapid emergence of Italian Magic as a global force to see the fruits of his labors.”

There’s no doubt that adding Riccardo to the ultimate heights within the DCI will be good for the game.

“From Level 4 we’re already asking Judges for their opinions on the direction of the game from a judging perspective, and Riccardo has consistently displayed the qualities that make him an outstanding candidate. Our job is to make the rules clear and concise, and provide the best experience for players at every level around the world. Riccardo makes that job easier.”

The path that began many years ago has come to fruition with Riccardo Tessitori, one of the nicest people in Magic, standing at the pinnacle of the community alongside his fellow Level 5s. Congratulations to him. The game is in good hands.