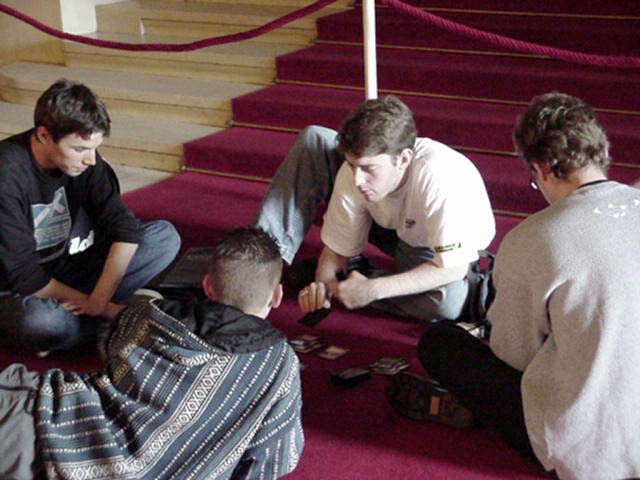 As the winner of the most recent Grand Prix in Europe, Trey was obviously hoping to continue his hot streak. Oslo was the third Grand Prix that he has won, and he has a host of other top eight performances as well. His preference is for aggressive sealed decks as a rule. In Cologne his card-pool was pretty bad, but he still achieved a record with no losses and one draw on the first day by including lots of one and two casting-cost creatures.

"This format is really skill based, because there are a lot of tricks, especially in draft". As he opens his cards, he's happy to see Gorilla Titan and Elephant Ambush as the first two cards out. Unfortunately it turns out that Trey's penchant for tricks will have to wait for another day, as his blue and black cards are horrible. Usually you would be looking for cards like Repel, Syncopate, Patriarch's Desire and so on in these colors, but the Dane has none of those, and so he rejects the colors immediately. Black is a lot better than most people think, but the creatures are pretty poor. Trey had a whole host of Fledgling Imps, Filthy Curs and other poor monsters.

This leaves him with three colors to build his deck out of, and it becomes clear that white-green splashing red for removal spells is the way to go. Overall Trey is short of playable cards, and this means that he has to play things like Patrol Hound. They're not great, but it means that his deck gets more aggressive, which is a good thing for him. His only real decision is whether to play the Barbarian Ring. His red cards are only Firebolt and Flame Burst, so he wouldn't want to play too many red sources. As the Ring requires another red mana to activate it, there are times when he wouldn't be able to sacrifice it, and it was left out.

Here is the deck that Trey ended up playing.