The "Tuga" who qualified twice 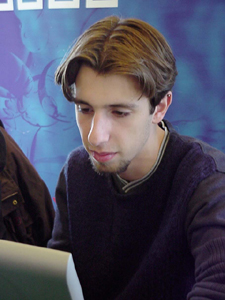 Whenever you get five hundred Magic players together, you are bound to find some interesting stories. Joao Duarte from Portugal has a good one to tell about his San Diego qualifying season.

Joao is widely considered the best Portuguese player who never qualified for a Pro Tour. Or at least he was, and then wasn't and then was and finally wasn't. Confusing? Yes, it is but we will tell you the whole story.

It all started with a simple trip to Faro (in Algarve, the southern part of Portugal) for the first qualifier of the season. Due to an unfortunate mix-up and honest mistake, some of the product wasn't correct. They only had some thirty starter decks for over a hundred players at the Qualifier. To fix the situation they turn it into a draft tournament for the players who decided to stick around even running the risk that the DCI wouldn't allow the tournament results to stand.

Sure enough the most experienced players breezed through the two drafts (the packs for the second draft were brought from Lisbon - 300 km away - while they were playing the first three rounds) and finally settled down for the Top 8, which Joao handily won.

But then the doubt set in. Would the DCI accept the change? Would Joao finally play in a Pro Tour? A week later the verdict came in: sadly, no. The Qualifier could not be accepted and after a week of hope Joao was now back to the PTQ-circuit reclaiming his crown as the best non-Pro Tour "Tuga" (short for Portuguese).

The organizers decided to convert his trip prize allowing him to come to Biarritz for a last, almost desperate shot, at Pro Tour San Diego. But this wouldn't be a good soap opera without another twist of events and a stirring finish.

A week ago in the hardest Portuguese PTQ (the usual huge field in Lisbon), Joao repeated his prowess. In the quarterfinals, thus one win away from the invitation, Joao got matched-up against the best deck in the Rochester table played by maybe the second-best "Tuga" who never played in a Pro Tour.

It would certainly be a tough match for Joao but this time he had something going for him: across the table sat his brother Ricardo, who without hesitation conceded (delaying his dreams of a Pro Tour and inheriting the title of best non-Pro Tour player in Portugal) to see Joao get his much-deserved, and once denied, invitation.

"I really wasn't expecting it and I was fearful of the match-up. I owe a lot to my brother."

That Saturday night in Lisbon he got the invitation, this time without any doubt, along with Pedro Bailadeira, another upcoming Portuguese player and first time Pro Tour player. So if get paired against Joao Duarte in San Diego remember he literally had to work extra hard to get there.