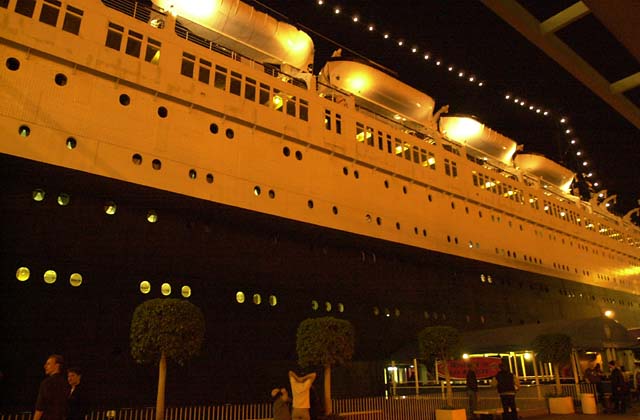 I doubt the wisdom of filling a boat with Magic players. Transforming a boat into a Boat-el is equally questionable. Apparently the rewiring necessitated a fair bit of exposed cord on every floor. There isn't so much of a ceiling to speak of. At best, it could be described as a creative use of particle board. I wouldn't be surprised to discover that the whole construct houses something else altogether. Two bits and a right-cross says it's all part of some criminal master plan.

Never mind the fact that there is a Russian sub parked some feet from my bedroom. I think its clear that we've become lax in our vigilance of the Red Menace.

The most unnerving thing is the unspoken threat that the whole business could weigh anchor and send us all hurtling into parts unknown. It seems tailor-made for a Hollywood action movie. Not that I'm saying I've seen Bruce Willis onboard. He's not due until at least the second act.

Lunacy aside, the public isn't ready to face the truth of what goes on here. Hundreds of people take over a defunct cruise liner in a bid to win thousands of dollars via the manipulation of cardboard. Throw in a few flashing lights and you could call it Science Fiction. With Magic players involved, it's nearer to Animal House than Brewster's Millions.

There have been the requisite hijinx. Vending machines that dispense year old sodas. Deathtrap bathtubs. Seagull attacks (a bird in the eye still qualifies as a scenic view). A perverse breadcrumb trail of Magic cards leading to someone's being trapped in the smokestack.

Which isn't to paint the experience as homogenously terrible. True, there have been times when the swarms of people make it seem like the sea is on the wrong side of the boat, but that's been balanced out with moments of blissful unconsciousness. At the time of this writing I pray for one more. I've never been left alone with a box marked "Megaphone," and I fear the consequences.