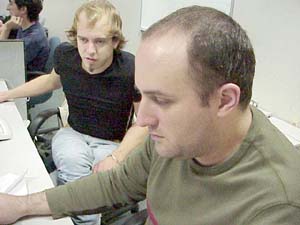 Initially derided as the format that received the least playtesting, Two-Headed Giant Sealed turned out to be a bigger success than any of the players expected. Even getting past the griping about monstrous card pools and the hassle of passing priority so often, it was far from a chore.

The rules are pretty straightforward. Two teams of two share forty life. Deckbuilding is as in regular Team Sealed, and teammates sit next to each other. Global effects (such as the mighty Shepherd of Rot) affect all players, and there are no targeting restrictions. The one odd rule is that you can only attack the person sitting opposite you. Not only could you not attack your partner out of spite, but also it was as if there were two separate battlefields. Of course, you could still sabotage your partner if you really wanted to. Chris Pikula openly lamented the fact that there wasn't anyone he hated enough in attendance that he would drag down into a loss.

Halfway into round one, the players got into the spirit of the format. There was too much going on not to have a good time of it. It helped that the players were idle for more turns, giving them time to make with the good times. The other contributing factor was that the first round team-up saw roommates teamed together. Romao and Ostrovich got rowdy. The Deadguys dissected their opponents with trashtalk. Nassif and Ruel went full-on silly. To say nothing of Gary Wise and Eivind Nitter, who were all giggles. And even Shvartsman and Humpherys, stoic in their YMG shirts, lightened up. The fun of it all was perfectly illustrated when everything stopped as Ruel revealed his face-down Krosan Colossus, then proceeded to take a victory lap, earning high-fives from all the competitors.

Emerging from the three rounds as the sole undefeated was Alex Shvartsman. His final sealed pool was an exercise in absurdity. His busty rares included Exalted Angel and Quicksilver Dragon. He even had a Riptide Shapeshifter to fetch them. The rest of the standings fell into place around him. Nine 2-1's, three 1-2's (his poor podmates) and Gabriel Nassif, Diego Ostrovich and Chris Pikula plumbing the depths. Pikula was forced to declare this event "Worst Invitational Ever".

Here's a quick look at some of the more savage cards, designed with multiplayer in mind, which wowed the Invitationalists.

When Dave Price read this card, he practically fell out of his chair. Not only would it, in all likelihood, give him enough creatures to swing for the win in one go, it would also leave his opponents unable to block. Though he never got to swing for the win with it, he did turn it over with Goblin Machinist for big damage.

Eivind Nitter took a second look at this card and started demanding that they not only run it, but its father Syphon Soul. Cooler heads prevailed, and only the Mind ended up making the cut, but wow does this card come home big in multiplayer. Ditto for Screeching Buzzard, who even as a chump blocker churns out the card advantage.

The common consensus is that you really need something special to play blue, and even then you might end up doubling-up on the wrong commons, like Airborne Aid instead of Ascending Aven. For instance, Brian Kibler couldn't even be swayed by Arcanis, the Omnipotent. But, provided you had the strength in blue, Blatant Thievery was a card you wanted to see. Sadly, Eivind Nitter never drew the one he ended up playing.

More than any other card, this one had the Invitationalists in fits. It figured promininently in Chris Pikula's trip to the 0-3 bowery. While he groused, loudly declaring his game "impossible to win", Jon Finkel was on the right end of the ridiculous enchantment. He happily announced "They've done sixty to us!"