While pro players were competing for large sums of cash during the course of this Pro Tour, spectators in Chicago and on the Internet were mostly concerned with one thing: determining the best Standard decks in order to copy, tune, and play one at their next tournament.

Most of the top teams agree that the format is relatively shallow. That is, there are only a finite number of strong deck archetypes to work with, and so few pros were happy going into this Pro Tour lacking any powerful tech. 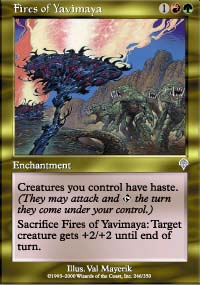 Two of the top teams - old Mogg Squad and Your Move Games - opted for the Fires of Yavimaya strategy. One of the most popular archetypes in the State Championships, the deck has been tuned in various ways to suit the players' styles, but it has not been altered significantly.

This is basically a red-green beatdown deck that uses Fires of Yavimaya to further speed up its offensive. Allowing powerful cards like Blastoderm, Chimeric Idol, River Boa and the Saproling Burst tokens to have haste along with the threat of being pumped by +2/+2 creates a very strong strategy that can often overrun an opponent before they are able to set up their own game.

The Mogg Squad version, represented in this Top 8 by Zvi Mowshowitz, is notable for two major changes. The most controversial is the lack of River Boas. Mogg Squad swears by this decision, claiming that River Boas have not been very good against any of the other major decks in the matchup. Most other pros (this reporter among them) feel that Boas are a crucial part of the deck. They are important in the mirror matchup and a necessary two casting cost threat that helps overrun the control decks and especially NetherGo. 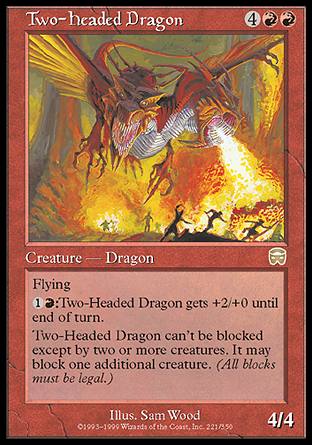 The other interesting tweak to the deck is the Two-Headed Dragon. This creature has several things going for it. First of all, it is capable of finishing the game within two attack steps almost every time. Second, it is very difficult for a Rebel deck to stop the Dragon, because it cannot be blocked by only one creature. Finally, it does not get destroyed via Perish - a powerful sideboard card against the deck.

Jon Finkel is one of many Fires players that splashes white mana. His white spells are Wax/Wane, capable of taking out painful cards like Parallax Wave and Story Circle, and Rith, the Awakener. Aura Mutations are an important sideboard card for the mirror match as well as several other matchups.

Two maindeck Kavu Chameleons help Finkel's case against blue-black and blue-white control decks. Finkel is also the only player in the Top 8 to use Urza's Rage - a card that has been extremely popular with the players outside of the Pro Tour so far.

Rob Dougherty is only using two colors in his very standard version of the deck. The only real tech in this deck is the four Rhystic Lightnings. Since this deck is unlikely to ever get up to twelve mana and pay Rage's kicker, Dougherty opted for a different direct damage spell. The fact that Rhystic Lightning can often destroy a Blinding Angel must have played an important role in this decision.

The most original Fires version in this Top 8 is designed and played by Mike Pustilnik. Pustilnik is main-decking the Aura Mutations - a good choice considering that every popular deck type other than NetherGo has enchantments. He is also playing a lot more direct damage than the other Fires players - with maindeck Earthquakes and Ghitu Fires both.

Brian Kibler is playing a red-green-white deck as well, but he is not bothering to use Fires of Yavimaya. Instead, Kibler chooses to utilize large creatures, and plenty of them. With no enchantments in his deck, Kibler leaves many of his opponents with dead cards in their deck game one. After sideboard, Kibler has been dominating the other Fires decks with his sideboard tech of Armadillo Cloak - an enchantment that not only makes his creature very difficult to stop, but also makes it impossible for an opponent to simply try and win the damage race. Armageddon helps Kibler win the control matchups. 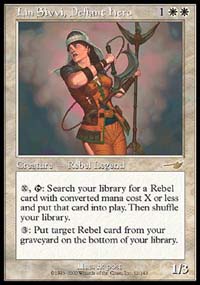 The second most popular deck archetype in this Top 8 are the Rebel strategies. Played by Cornelissen and Budde, their two decks represent the two schools of thought behind designing a Rebel deck in this format. Most of the successful Rebel decks are splashing another color - not so much for the spells this additional color might provide, but to protect themselves from Flashfires, or even an early Massacre. Most players opted to splash blue for this purpose. My own Rebel deck played 4 Adarkar Wastes, 3 Coastal Tower and 4 Rishadan Port, while playing 3 Power Sinks as the only blue cards in the main deck. Tony Dobson chose to splash black for Vampiric Tutor and Tsabo's Decree. Finally, Budde himself splashed green for Wax/Wane. Budde's deck is somewhat less protected against Flashfires than similar versions, but it certainly has worked well for him.

Kamiel Cornelissen is playing a much more controlling deck with fewer Rebels but a lot more countermagic. His deck is especially strong against blue-white control, an archetype that was extremely popular in this tournament but did not do particularly well. (Although the deck did achieve a 9th place finish). As a tradeoff, Cornelissen might have a weaker matchup against aggro-rebels and a few other decks.

Last but not least is Jay Elarar's Blue Skies deck. Only twelve people opted to play mono-blue beatdown in this tournament, but it might possibly be the most successful archetype here, with most of these players making second day and doing well afterward. Elarar's MVP has been Wash Out - devastating against both Rebels and Fires. Perhaps the most interesting version of a mono-blue beatdown deck was played by Bob Maher, who finished in the Top 16. He combined aggressive blue creatures with the Parallax Wave/Ankh of Mishra strategy and added in Overburden.

Whichever deck actually wins the Pro Tour, this Top 8 will set the tone for the Type 2 metagame in months to come. When preparing for your next tournament, build your decks with these strategies in mind, but do not ignore other archetypes such as NetherGo, Blue-White control, White-Green and even monored. All of these have made an appearance at this Pro Tour and are quite capable of winning smaller tournaments.