There have only been a couple of weeks since the release of Dragon's Maze, and that is not a very long time to fully figure out one of the most difficult Booster Draft formats in recent history, possibly ever. While there is still a large amount of speculation about the best way to go about drafting in this full-block format, it appears that there are seven players here at Pro Tour Dragon's Maze who are a little ahead of the curve.

Only seven players managed to navigate their way through Return to Ravnica BlockBooster Draft and emerge unscathed with perfect 6-0 records in the format. The methods they used to do so varied from drafter to drafter, but there were some common threads.

Kill it With Fire

Sometimes, the best way to win a game of Magic is to kill everything that moves and bash your opponent with any card with a power and toughness. Both Dusty Ochoa and Craig Wescoe were proponents of this strategy in their drafts, and were rewarded with a clean sheet. Ochoa's first draft deck was a Gruul splashing white deck featuring double Mugging, double Warleader's Helix, Ground Assault, Punish the Enemy, Avenging Arrow, and Explosive Impact. While his creatures, which included double Zhur-Taa Druid and Guardian of the Guildless, were solid, they weren't flashy. The two Guttersnipes, however, did work. Seven multicolored spells added enough damage that he could likely send some of that burn to the opponent's dome to finish them off. 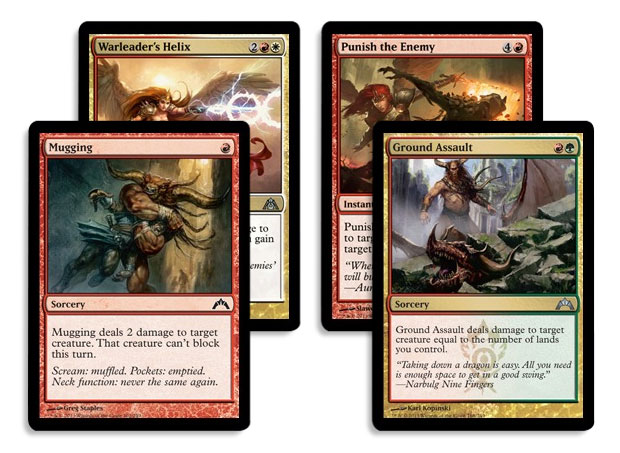 Wescoe's first draft deck was very similar in that regard. He was mostly Izzet and Dimir cards, spread evenly among all three colors. An incredible removal suite included Runner's Bane, Grisly Spectacle, Killing Glare, Slum Reaper, Augur Spree, and Pit Fight. There were a few deceptively powerful creatures in his deck, such as Fluxcharger, Haunter of Nightveil, and Rix-Maadi Guildmage, but there weren't any trademark bombs.

One of the common conceptions about this full-block draft format is that it has slowed down a notch or two from triple Gatecrash and Return to Ravnica. This has allowed players to go a little deeper with the spells they play, adding value to some cards that previously were thought underpowered. Rob Castellon's first draft deck is a perfect example of this. Axebane Guardian has gained a tremendous amount of value with the addition of more good defenders to the format, as well as the necessity of both fixing and ramping mana. Castellon's deck featured the Guardian alongside two Gatecreeper Vines (previously thought to be fairly weak) and Hired Torturer. The Gatecreeper Vines in his deck also served double duty when combined with the Species Gorger in his deck, becoming an effective Wall of Blossoms every turn. This is assuming that he didn't want to return his Balustrade Spy every turn to mill an opponent out, or his Diluvian Primordial to cast some sweet spell from an opponent's graveyard.

Previously known for allowing for allowing giants to come down a lot earlier, Axebane Guardian has picked up value in the full block's Draft format.

Another great example of a card that has gained value featured in Castellan's deck is Rites of Reaping. At six mana, Rites of Reaping was frequently relegated to sideboards due to the fact that it was often too slow to have a meaningful impact. Now, it is great removal spell, and a potentially huge tempo swing. Rounding this sweet showcase were a couple of fantastic bombs in Duskmantle Seer and Mystic Genesis.

The slower format also makes it easier to set mana up, allowing players to play bombs across multiple guilds. Matej Zatlkaj's second draft deck is a perfect example of this. His creature base is one of the most absurd I've seen in this format, and that is saying a lot. Triple Beetleform Mage, Drakewing Krasis, and a slew of supporting Simic creatures form an incredible base for any deck. They get even better when you dip into red to add the likes of Rubblehulk, Savageborn Hydra, Hypersonic Dragon, and Clan Defiance. The ability to fix mana with access to Keyrunes, Cluestones, and Guildgates (of which Zatlkaj had three) makes it very easy to snap up bombs like these to enhance your deck.

His first deck also ran across all three of his guilds rather evenly, and he didn't shy away from bombs he thought he could cast. Giant Adephage (another of those cards that has increased in value), Prime Speaker Zegana, and Collective Blessing are an incredibly powerful trio of cards to build a deck around, and they're even relatively easy to cast thanks to his trio of Guildgates, his Keyrune, and Cluestone. His deck also had an incredibly tight curve, with nine creatures that cost three or less. While he didn't have too much removal (only Avenging Arrow and Krasis Incubation), his great creatures and powerful late game gave him all he needed to simply overpower opponents.

While the format certainly seems to have slowed down, by no means should you count the aggressive decks out. Dusty Ochoa's second draft deck took the best evasion creatures from across Orzhov, Dimir, and Azorius, put them into a deck, and cut them loose. Sunspire Griffin, Daggerdrome Imp, Deathcult Rogue, Wind Drake, and the powerful Lavinia of the Tenth provided great bodies to carry Shadow Slice and Holy Mantle, while Azorius Arrester, Arrest, and Haazda Snare Squad kept the path clear. If things did manage to clog up, his double Thrull Parasite and Tithe Drinker could provide enough extort triggers to finish things off. He even had a Palisade Giant to win the races against other aggressive decks.

Christian Fehr was another who used tempo to their advantage. Between Cloudfin Raptor, Incursion Specialist, Runewing, Skyline Predator, Basilica Screecher, Ascended Lawmage, and Vassal Soul, Fehr was able to get through a ton of damage. While his fliers were away, two Murmuring Phantasms, Leyline Phantom, Basilica Guards, and Hussar Patrol held down the fort. Azorius Charm could give him the lifelink he needed to win races, while Cyclonic Rift could push everything out of the way for one last attack.

While Fehr and Ochoa chose the tempo route, others just simply smashed face. Hao-Shan Huang had Varolz, the Scar-Striped, in both of his draft decks, inluding one where he got to team it up with Vorel of the Hull Clade. Both decks featured a plethora of early creatures, his second in particular. Two Riot Pikers, two Kraul Warriors, Disciple of the Old Ways, and Zhur-Taa Druid gave him six plays on turn two, not to mention the two he had for turn one. To keep the pressure on, Huang had three pump spells and three creatures with bloodrush, a great combo with Varolz. His decision to play a pair of Drown in Filths in his first deck is very notable, since most players seem to think it near unplayable.

Craig Wescoe's second deck was another "smash you in the face" deck. In addition to a bevy of aggressive creatures, Wescoe had Pursuit of Flight, Deviant Glee, and a pair of Madcap Skills to enhance them. He was even running Shadow Alley Denizen for evasion, Maze Rusher for haste, and Exava, Rakdos Blood Witch, because she's awesome. All of these sources of damage plus Shadow Slice plus Rix Maadi Guildmage equals a very quick end to most game.

Others opted for very clear defensive stratgies. Christian Fehr's second deck was exactly the opposite of his first deck, this time going for the end game. Two Grim Roustabouts, Voidwielder, and Murmuring Phantasm are there to extend the game as long as possible. Waiting at the end of the tunnel are two incredibly potent bombs: Consuming Aberration and Teysa, Envoy of Ghosts. Roustabouts don't get played very often purely to act as a 1/1 regenerator, but when your endgame includes bombs like that, they begin to look much more appealing. Fehr's deck had just enough removal to help aid in his goal of getting to the end game, making his fortress a tough nut to crack.

Early defenders can help players drafting slower decks get to the point where bombs such as Consuming Aberration can take over.

Melissa DeTora's second draft was defensive in nature as well. From triple Opal Lake Gatekeepers to Doorkeeper to Bane Alley Blackguard, most of her creatures were aimed at slowing opponents down. As the game dragged on, she had the option of going big with Gift of Orzhova or simply waiting for her big threat: Ætherling. Hypersonic Dragon and Lord of the Void provided another couple paths to victory, offering a way to take advantage of a likely stalled ground. In a pinch, Doorkeeper and his buddy the Hired Torturer could occasionally be counted on to finish things off as well, as her defense often gave their grindy abilities time to do work.

The last two decks are perfect examples of what you can do with a solid creature base in this format. They may not be flashy, but they are solid as a rock, and that is often all you need to be in a format with as many potentially greedy mana bases as this. First, Melisa DeTora's other deck is a Gruul deck with the textbook curve. With a curve running from Experiment One to Maze Behemoth and Chaos Imps, she was sure to have something to do at every point in the game. A Pair of Zhur-Taa Druids helped her both speed out some of her more expensive cards, as well as shortening the clock. Supporting these creatures were Unflinching Courage, Common Bond, and three red removal spells, including Explosive Impact as a potential finisher.

Rob Castellan's second draft deck is even more into it's creatures. Running a whopping nineteen creatures across Gruul and Simic, Castellan wanted to take advantage of his excellent bomb: Domri Rade. His only other spells in the deck were Explosive Impact, Krasis Incubation, and Punish the Enemy. With such a large portion of his deck devoted to creatures, he was able to maximize the effects of cards like his Ivy Lane Denizen (thirteen green creatures), two Species Gorgers, and Rubblebelt Raiders.

Seven different players and a large variety of strategies going undefeated here at Pro Tour Dragon's Maze is a great sign that the format is not only wide open, but we still have a great deal to learn. As you move forward, keep an eye out for those cards that you might have previously scoffed at. Things have certainly changed now, and you won't know how things work out until you try. These players did, and they were clearly rewarded.