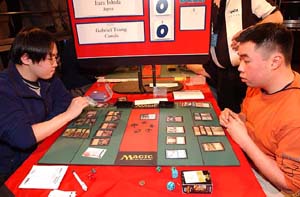 The rudiments of Rochester Draft are well-known. You want to go into a draft knowing having a strong sense of the relative value of cards, as well as knowing what cards work particularly well together. Also, you need to watch your neighbors and stay out of their colors, because co-operative drafting pays big dividends.

But of course the strategy doesn't end there. Different color combinations work best when they have a specific strategy. For instance, red-green beats wants to have a busy early game with a few heavy hitters batting clean-up. Blockers are removed or reduced to chump blockers. Demoralize and Rites of Initiation punish opponents just as they think they've stabilized.

Since each color has strengths and weaknesses, some combinations are more complimentary than others. We asked some of the pros in attendance what they thought were the worst color combinations to draft.

Canada's old-school limited workhorse, Gab Tsang, said that he considered red-blue and red-white the most dangerous choices. In red-blue, he said, all the business cards cost four or more. Once it starts casting these expensive spell, it's golden, but the inherent lack of an early game means that high draft picks have to be spent on cheap removal like Flame Burst and Firebolt. As a result, your overall deck quality will be poor. That whole spiel came with the proviso that this format is very "Good Card"-oriented, in that one good card can negate three of your opponent's average ones. So the right cards can make anything workable.

Japanese megapower Itaru Ishida, the brains behind Tokyo Masters Finalists Panzer Hunters and generally considered Japan's strongest Rochester drafter, had a surprising answer. He said that he found almost any strategy to be workable, but that he tries to avoid blue-white. While he admits that blue-white is one of the most powerful strategies, he finds that the most important cards are wanted by all blue and white players. Thus he's found himself unable to consistently draft a winning deck in those colors.

No survey would be complete without picking the brain of the consensus best player ever to pick up a card, Kai Budde. The German Juggernaut was quick to dismiss half of the color combinations as undraftable. He had particular vitriol for black-white, saying that on the commons alone, the combination cannot work. The mismatching of black's graveyard-eating and white's love of threshold is just painful. 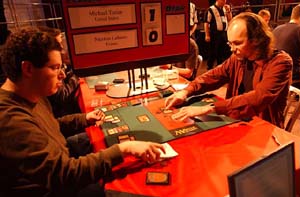 The Great Potato, Mike Turian, voiced a similar opinion. For him, though, no combination was more hated than black-red. In his words, too many cards answer it, particularly in white. "Someone will drop Mystic Zealot, and you'll be all 'Ooh, Thermal Blast!'. To say nothing of Embolden, Shelter, there are so many cards out there that wreck your strategy." The only time this seems to work is when the removal runs deep, as in Chris Benafel's New Orleans Masters deck.

The enigmatic and charming Nicholas Labarre had very little to say on the subject. For him, black-white was the worst. His explanation was simple: Black-white often finds itself unable to break through. You'll have a great deck and cannot win.

Doctor Mike Pustilnik, last year's Pro Tour L.A. Champion, said that only red-blue was unworkable. He said that your best cards are burn and bounce, and so to build an early game you'll find yourself taking a lot of Mad Dogs, something he does not like to do.

Lastly, England's Gary Wise told a much different story. He stressed that most of Rochester Draft is what your opponents are doing, so that any pair of colors can work out if your neighbors are shipping you the goods. He agreed that the worst combinations are red-white and red-blue, but was quick to point out that Zvi Mowshowitz and Dirk Baberowski had 4-0'd their tables with those exact combinations. He echoed Mike Pustilnik when he mentioned that Baberowski's deck looked incredibly janky, and was packed with Mad Dogs.