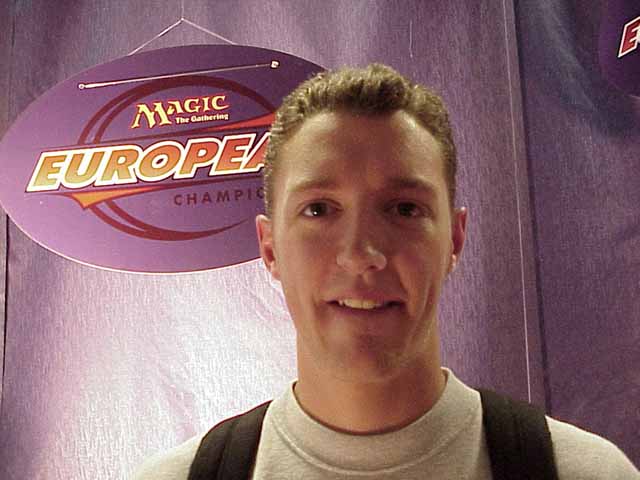 After the draft portion of the 2000 European Championship, 20 year old Jean-Louis D'Hondt from Belgium unexpectedly found himself undefeated. "I hadn't expected this at all. I like draft, but I'd never thought I'd go 6-0. Maybe a good result like 4-2 or 5-1, but to go 6-0 you have to be lucky," he smiles.

The player from Brussels was both lucky and skilled. In the first draft, he got a really good deck that was well-balanced, it had good creatures and a lot of good removal. The black and green cards came to him, and his deck was simply better than the other decks on the table. But in the second draft, he ran into more problems choosing colours. He started out with an Undertaker, then he got a Bribery and an Aerial Caravan before getting passed an Intimidation. In the next boosters, however, he didn't get any blue nor black cards, so he had to take a Muzzle and two Invigorates before the blue got back to him. Then he opened a Dominate and got heavily into blue before a Blastoderm made him scrap the black and go for green. "The best cards were Bribery and Dominate, but my deck was really good. I had two Seals of Removal, and the Invigorates won me lots of games," he says.

Of course, Jean-Louis is happy about being undefeated, but that doesn't make him more sure about what to do in the Standard portion. The Belgian hasn't chosen a deck yet, and he is afraid of the format as he doesn't know what to expect. "It's all about the matchups," he claims, knowing that a 3-0-1 record probably will be enough to put him in top 8. So all in all, he won't have to win that many matches, however, he knows that the hard part is to actually do it. "I have two decks, and I'll choose one tonight. I just hope I make the right choice."

The young Belgian feels that he has had his share of bad luck. Often, he has been mana screwed in big tournaments, but in the draft portion of Euros, the goddess of mana flew over him and made sure that he was okay. However, he has some good results. He made top 8 both in Grand Prix Birmingham and in Grand Prix Lisbon, and in Pro Tour London, he finished 16th. Still, his expectations for Euros were merely to make the top 64 and get some money. "Now I hope to make top 8," he admits.

Maybe this is the time for Jean-Louis. He has been around for a while as he started playing approximately five years ago. But he still loves the game, and especially tournament play. And he also enjoys meeting people and making friends from all over the world. "If I could play and only do that in my life, I would have done that. But it's really difficult to get better in Belgium, because the level of play is pretty low. My only chances are the big tournaments," Jean-Louis says.

Jean-Louis feels that me makes less mistakes now than before even though he still makes them. "But when I don't, then maybe I'll win," he smiles. "If I don't screw up tomorrow, I will make top 8. I'll just try to get normal draws." And perhaps the psychology student can even use some of the things he has learnt at the University to defeat his opponents. "I don't use it," he claims, but then he reconsiders. "Maybe I do some mind games, but everybody does. I pretend I have something in my hand, the usual tricks." But finally, he admits that he analyzes his opponent even more than that: "I look at the face. That's important."