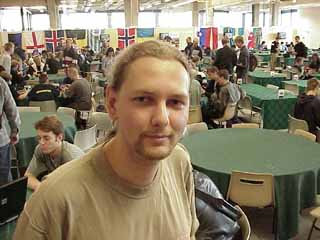 In 1997 Pro Tour New York, an unknown player from the Czech Republic surprised everybody by finishing second in what was his very first Pro Tour event. Then Jakub Slemr sailed up as the frontrunner of the Czech by winning Worlds 97. And without any follow-up performances, things calmed down a bit around Ivan Stanoev. He is still in the game, though. But at 22, the store owner from Brno takes the game a bit less seriously. He doesn't even consider himself a well-known player. "I made that second place a long time ago, and at that time I was just a random scrub from some country. The Czech Republic, where is that?" Ivan jokes.

For two years, Pro Tour regulars could see the long-haired, quiet Czech playing in the various Pro Tour events. Then he fell off the gravy train. This last year, Ivan has struggled to get back on the Tour. So his goal for the 2000 European Championship is fairly simple. "I need to make the top 8, because I'm not qualified for Worlds," Ivan explains. And the tournament started out fairly well for him. At least 2-1 in the first draft didn't rule out a top performance from the 22 year old. After the second draft, Ivan was also pretty happy about his deck. "It's better than the deck I had before," he smiles and lays out a pretty solid red and black deck including cards like Seal of Doom, Vicious Hunger, Overtaker and other good creatures. Now, he just hopes that the deck is good enough for him to win his last pod in order to get into position before the Standard portion of the Euros.

"I think I'm better in draft, so I think I need to go 3-0," Ivan explains. "Type II is too much about matchups. The various decks beat each other." Like a lot of other players, the Czech hasn't decided which Standard deck to play. He prefers control, but doesn't really like blue. "It is too slow. I like to do something. When we test, blue always seems best, but in a tournament it is hard to play it well each time."

Ivan doesn't get nervous, though, and that is his major strength. He manages to stay calm whomever is on the other side of the table and whatever is at stake. "I know the cards pretty well, especially in draft, and I am also a judge in my own store, so I know the rules," Ivan explains. Those things make him pretty confident when playing. He has also been in the game for a while. Ivan started playing during Fallen Empires. At that time, he was writing a gaming fanzine, and when new games came to the Czech Republic, he reviewed them. That's how he first got into Magic. And when he started winning tournaments, he was hooked.

Even though Ivan doesn't play that seriously anymore, he is serious enough to want to win a Pro Tour. And he figures that his best shot at it is the Team Pro Tour in New York this autumn. Ivan is on team Hammer of Brno along with Martin Laznovsky and Libor Marek, and the three of them already finished second in Grand Prix Frankfurt this year. So in New York, they will be trying to follow up that performance.

"I prefer teams to individual play. It is much more fun and less luck," Ivan thinks. "Besides, I prefer to go to tournaments with my friends. It is really the same for me whether I win as a team or as an individual, but if we win as a team, we can make a bigger party!"