You might not have noticed, but we're moving up on Magic's tenth anniversary. This summer, ten years ago, at the Gen Con game fair, Richard Garfield unleashed Magic: The Gathering on an unsuspecting public. From there, the rest was history. The game spread across the globe. It's now published in nine different languages, with over seven million active players in fifty-two countries. It has its own professional level of play. With ten years of new cards, new mechanics, the game is still going as strong as ever. That's cause for some serious celebration.

The release of the upcoming incarnation of the base set, Eighth Edition, has been pushed back to synchronize with the ten-year anniversary. So Gen Con will be the big birthday party, then the following weekend will be worldwide Eighth Edition tournaments and the party wraps up the weekend after that with nothing less than Magic's biggest dance: the World Championships, in Berlin. But that's not all. Wizards of the Coast have planned something big for Eighth Edition. When I say big, I mean The Fat Boys, Godzilla and Kai's bank account big. 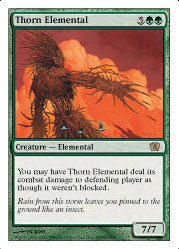 They're changing the face of Magic. Take a look:

Trust me; I know what you're feeling. Here's the conversation my boss Thomas Pannell and I shared the first time he showed me that same image: 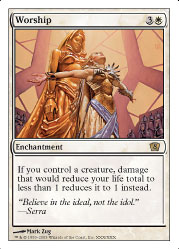 I tried to work through my shock and figure out what was going on here. First, there are lots of boxes. There's one to hold the card name and casting cost, one for the card type and expansion symbol and one for the power and toughness, if applicable. The power/toughness box is the most striking, infringing as it does on the traditional text box. Richard Garfield has long thought that creatures' power and toughness should be more visible on cards, just because they're so essential. The others are still a drastic change. Compare them to an old card. See how they all seem to bleed into the colored frame? Don't get me wrong, the colored frame is great; it makes it easy to tell a card's color at a distance. It's just that those other things are pretty important, too. There’s no sense quashing them when you could give up a little bit of frame to make them stand out. The black text gives extra visibility. The difference is all the more striking when you look at a white card. 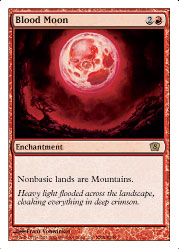 Check that out. The name and type come out clear, instead of fading back into the white frame. You'll also notice that the card art and text box are wider, stretching almost to the edges of the card. Again, that was just more real estate stolen by the frame, so why not expand? Plus, a card's art is the best identifier for what the card is, so it should have as much emphasis as possible. This next card shows the increased art space beautifully. Of all the preview cards, this one's my favorite and really sold me on the new layout. 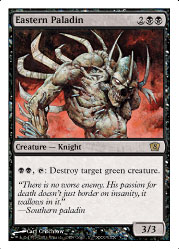 Now that's some art that deserves as much space as possible! It goes quite nicely with the redesigned frame pattern, too. All the colors have gotten a touch-up in that department. Black is the closest to its old self, shown here.

Everyone else is dressed in the brand new. The belle of the ball is certainly the artifact, who finally gets to shed that too-close-to-land-brown. 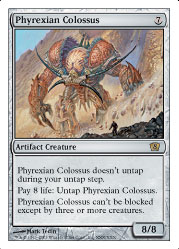 There's the new color of artifice. Somewhere between steel and stone, it really brings home how, well, artificial these things are. The distinction between artifacts and their colorless brothers, lands, is much more pronounced. 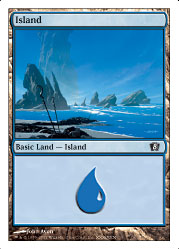 Here's another big change: land subtypes! Basic lands are clearly identified as such for newer players. Likewise, it neatens up cards that have types that aren't the same as their name. Before, every land had a subtype equal to its name. Under this scheme, a Tundra wouldn't need four lines of text, just "Land – Island Plains" in its type box. Likewise, the Dragon Lairs from Planeshift would lose some of their explanatory text, being instead "Land – Lair".

I was lucky enough to talk to Director of Magic Research and Development Randy Buehler about these sweeping changes. Apparently, they've been a long time coming. Ten years is an awful long time, when you think about it. And while the front of a Magic card hasn't changed much, Wizards kept finding little things about it they wanted to change. 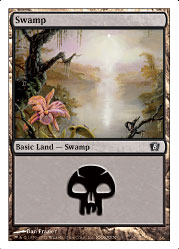 The story goes like this: around the time of Invasion's development, the Magic Brand team decided that it was time for Magic to get a facelift. The wish list of proposed tweaks to the design had grown large indeed and the catalyst to make those changes happen was foil cards. You see, Magic is the original trading card game. It was the first game to feature foil cards. The problem was that the design of the card face was made before foils were even a consideration. Later games were able to design their cards so that foils would look really cool, while Magic was sticking with the tried and true. The upshot was that their foils look better. This would not stand. 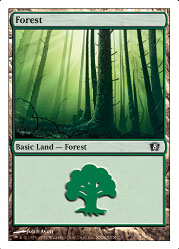 So, Wizards went all the way back to the drawing board. The initial redesigns were pretty radical. One version had mana costs running down the side of the card instead of in the top-right corner. They discussed these crazy layouts endlessly. Never mind that even if they managed to agree on an overall geography of the card, there was plenty of fine-tuning to be done. It was soon clear that the job was too big. Rushing something out the door for Invasion just didn't seem right. They put it on hold, looking forward to Eighth Edition. It was Buehler himself who pointed out the proximity of the proposed Eighth Edition release and the tenth anniversary. It wasn't a hard sell to push back the release four months to coincide. 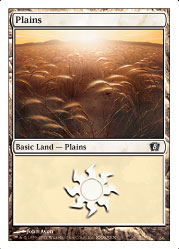 Now, they had lots of time to make sure things were done right. After testing a bunch of new card layouts, they decided that whatever gains there were to be had from a radical restructuring weren't worth alienating existing players. With that as their guide, they looked at how they could spruce things up from both an aesthetic and a technical point of view. The frames were targeted first, as they were key in bringing out the best in a foil. They also needed to convey the card color at a distance while being as subtle as possible, so as not to detract from the rest of the card.

Once that was in place, they tested the limits of what they could do. The final version is actually pretty close to the original imagining. In between, though, they took countless liberties with the different areas of the card. At one point, the power/toughness box encroached on almost a sixth of the text box! Of course, that meant that sometimes the card text had to wind around it. All these different variations got printed out and shown around the office. Everyone's a gamer at Wizards, but there are lots of different types of gamers. The great old ones like Henry Stern, Worth Wollpert and Randy Buehler, the new inductees and the casual crowd. They made sure to try playing with the old and new together, and the results were encouraging. Everybody got a chance to test drive the new styles and provide feedback. All that in-house work went a long way towards making sure they made the right decision. Even Richard Garfield has given the new design his seal of approval. 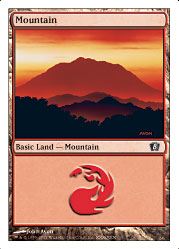 The new designs will also apply to cards from Eighth Edition forward in Magic Online, but will not be retroactively applied. Cards from before Eighth Edition will retain their classic look. After all, Magic Online is a reflection of the game itself.

It's scary, changing something that's been the status quo for a decade, but it's not so very different. It's a little sharper, a little snazzier. As Jeremy Cranford put it "it's the same Corvette. It's just got a new paintjob." It seems like it's the sort of thing that, six months after it happens, I'll be looking back and wondering how it could have been any other way.