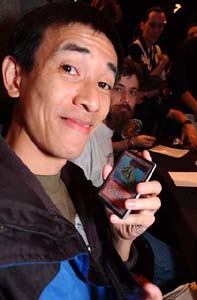 Eight players, selected in the final round of eight separate Magic Museum events held during the World Championships, sat down Sunday morning to draft something most people can only dream of. Starting of with a Beta booster, followed by an Arabian Nights and Antiquities put together (because they only have eight cards each) and finishing off with a pack of Legends, this draft is truly something you won't be able to do every day.

Getting selected for this draft aws a great honor, and it was even more special for Hong Kong's Chun-Hung Bone Kwak. Not only would he be drafting on Sunday, he would also be celebrating his birthday. Chun-Hung has been playing since 1995, but doesn't play that much. He came to this Worlds more because it was in Sydney than because of the tournament: his friend was qualified and he joined him so they could go sightseeing afterwards. But apparently he couldn't pass up the opportunity to play in some side events and he got this nice birthday present for doing so.

Australian Paul Everitt says he has been playing since "cogs," which, after some investigation, turns out to mean the expansion symbol for Urza's Saga. He came to Worlds to have some fun and play in some side events. One of the last events he intended to attend was the Magic Museum event on Thursday. His plans to go home on Friday were rudely disturbde when he got selected to play in the Vintage draft. He called to work on Friday, telling them he wouldn't be there. It'll cost him money for not working but he'd surely rather have this experience.

Drafting these sets is very different from drafting with more recent expansions. Evasion is much more important, creature kill is harder to find and the sets are very unbalanced. 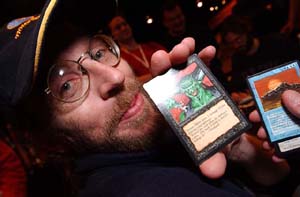 When the boosters were opened, the players had to write down the contents and protect one card from each booster. After the draft they were then allowed to pick one of the protected cards which they would get to keep after the tournament -- and all the rest was for the winner. The Beta pack was cracked and the crowd was anxiously waiting to see what rares had been opened. There wasn't anything really spectacular but the Volcanic Island that was opened by Chun-Hung was nice. There was also a Counterspell and a Demonic Tutor, but nothing really exciting. Chun-Hung was under the impression that you had to draft the card you protected and picked the Dual land, shipping a Phantom Monster to his left-hand neighbor, Paul Everitt, who happily picked it up after taking the Force of Nature he opened, hoping Blue-Green would be as kind to him as it has been to many players in Odyssey drafts around the world last year. Hung Chung's second pick Northern Paladin, was followed up with dropping ten cards on the floor. People grimaced at the cavalier treatment of Beta cards, but after some searching all cards were accounted for undamaged. He got a Counterspell and Uthden Troll in the next few packs and when he picked up Wall of Air he had made himself a blue mage.

His ninth pick was a choice between COP: Black or a basic land (Wizards put basic lands in the boosters until Revised); logically enough,he picked the COP. His next pick was a Holy Strength followed by Holy Armor, which gave him the impression that white would be available. On his left side, Paul stuck to blue whenever he could, picking Blue Elemental Blasts over playable green cards. He picked up a Wild Growth, though, to help him cast his big green monster.

When all the lands were drafted, the crowd was murmuring about Library of Alexandria, City of Brass, and Juzám Djinn in expectation of the Arabian Nights packs that were about to be opened. The players opened their boosters and slowly went through them. One player smiled while the people behind him were looking much more excited; it took us a while to convince the player to tell us what he opened. There it was, another Juzam to help evil take over the world. There was nothing else that was exciting so when the players had written down and protected one of their cards they went on with Antiquities. This time around, there was a Candelabra of Tawnos waiting for one of the players. After writing down the cards down again the drafting got underway. Paul started with a Primal Clay, picking a Wall of Spears second. Chun-Hung opened a City in a Bottle, and even though there were just eight Arabian cards in each pack he choose to take it. He then received a Moorish Cavalry, which he took, continuing with his white plan. 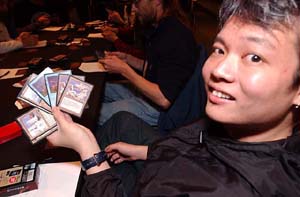 This paid off, as he got another one in the next booster. In this pack he also got an Island Fish Jasconius and two Argivian Blacksmiths. Paul picked up some more nice blue and green stuff when he got handed a Bird Maiden. He decided he needed more evasion and picked her up. He followed this up with back-to-back Atogs, fixing him on three colors. Legends was a bit of an anticlimax, with both Chun Hung and Paul added some useful cards to their decks with Paul getting a fourth pick Jerrard of the Closed Fist and Chun Hung picking up a Tolaria along the way.

The tournament was run with 4 rounds of Swiss. Paul Everitt had a lot of fun, but his advice was not to try and copy his drafting ways, as he went 0-4. After the four rounds, three players were stranded at 3-1. Chun Hung did not get the birthday present he hoped for, because he had the lowest tiebreakers. Nicholas J. Wong came in second after going 3-0. He lost in the third game of the final match to Chun Hung, who decimated his board with his first pick City in a Bottle. The winner was Nathan D. Russell. Nathan has been playing since unlimited (1993) and had a good idea what all the cards were doing. On top of that, he plays in many PTQ's and made Top 8 at the Australian Nationals. A solid player, with an edge because he knew the cards, he must have felt confident.

1 Jerrard of the Closed Fist