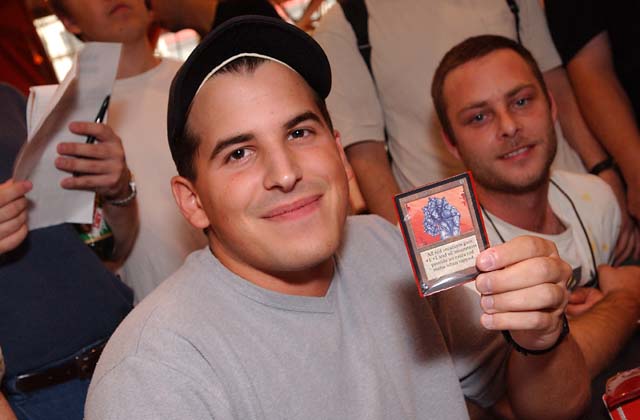 Over the course of the World Championship week in Toronto, Wizards of the Coast ran a number of exciting tournaments for Magic players who weren't qualified for Worlds but were willing to travel to Toronto anyway. Among them were a number of $800 tournaments in formats such as Extended and Classic. Throughout the week, there were also eight tournaments that were a part of a "Road to Worlds" promotion.

Each day, there were two "Road to Worlds" events. They were held in variety of formats, both Limited and Constructed. A player who was still competing during the final round was chosen at random from each tournament - the choice was not based on performance, only on persistence - players who dropped out of the tournament before the final round weren't eligible for this prize. The eight players randomly chosen during the week were given an opportunity to play in a Vintage draft on Sunday morning.

These players were presented with a unique opportunity to open some very rare, out of print booster packs. They would start with a Beta pack, then open Arabian Nights and Antiquities packs, and finally a Legends booster pack. Originally this event was advertised as Booster draft but, with consent of the participants, it was changed to Rochester draft format last-minute - that way it would be a lot more exciting for the spectators, who gathered around the draft table hoping to see a Mox or Juzam be opened.
Winner of the draft would keep almost all the cards opened - but no one was going to walk away empty-handed. Each player got to choose and keep one card of those they opened. They did not have to draft the card - organizers simply kept track of the card choices and would return the chosen cards to the players at the end of the tournament.

Ragnar Kjartansson was the first to open a pack, revealing a mint beta . . . Healing Salve. Spectators crowded the table, and each new card was revealed to "ooh's" and "aah's" of the crowd. The spectators wanted to see some excellent rares opened - and the packs did not disappoint. Kjartansson opened a Vesuvan Doppelganger. The streak of rares that followed was no less impressive. In order, Savannah Lions, Royal Assassin, Crusade, Lich, Birds of Paradise, and Gauntlet of Might were opened. The only unlucky player to open a mediocre rare was Mike Foley, who ended up picking Llanowar Elves as the potential card to keep over his rare - The Hive. 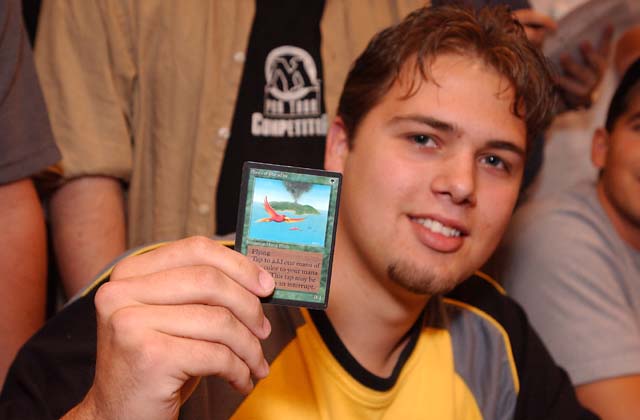 The only somewhat disappointing detail about the beta packs was the ever-present basic lands. Each pack contained between three and six basic lands. "In the early days of Magic," explains Wizards of the Coast staffer Reid Schmadeka "we did not have a very good way of randomizing the cards that come in booster packs. Thus, many packs would come with as many as five or six basic lands." Basic lands were inserted in booster packs up to and including Revised, and were removed in favor of more common cards based on popular demand. In Seventh Edition, the basic lands returned, but only at one per pack.

The combined Arabian Nights and Antiquities pack followed Beta. Since each of those booster packs includes only eight cards, they were united into a single sixteen-card pack for ease of drafting. The sixteenth card helped at least somewhat offset the many basic lands opened in the first round of drafting. These packs were also pretty impressive. Among the cards opened were Ali from Cairo, City of Brass, Bazaar of Baghdad, and Khabal Ghoul.

The final round of drafting was done with Legends packs. This time around, no power rares were opened - but most of the players could hardly complain, since they got to keep only one card opened out of their four packs. The only player to have gotten less than a ten-dollar rare was Mike Foley. He was unfortunate to open packs that featured no better than a beta Llanowar Elves.