Five players paid for the right to draft vintage cards with Matt Linde, William Jensen and David Williams in this event sponsored by Players Choice Sleeves. 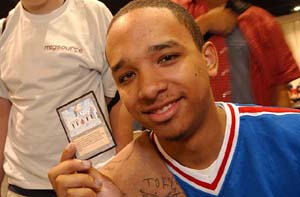 The Arabian Nights packs were the first ones ripped open and there was one big money card. Roberto Gonzalez of New Mexico opened and got to draft a Library of Alexandria. Under the prize split that the players agreed to before hand Roberto will get to keep that card. Each of the five non-pros at the table will keep what they draft and the winner of the draft will get to take the cards from the three pros. Roberto paid $40.00 for his seat at this draft, and he's ahead of that curve already, one pack in.

After pack one Matt Linde appeared to be drafting blue and green, having grabbed a Flying Man and a Serendib Efreet in the Arabian Nights packs.

The Antiquities packs were opened and Brian Hurley of Wisconsin was the big winner. He opened a Mishra's Factory, and also drafted two Ornithopters to go in what is looking like it will be a black deck.

After pack two David Williams was looking confused. The pile of cards he'd drafted might include three or four playable cards. Hopefully the Legends packs would be nicer to him. Wait, never mind. David opened and first picked Nicol Bolas, it's almost like he didn't want to win.

The Legends packs proved to be the most disappointing so far, as no big money cards were opened.

The Legends packs continued to go around the table, and "Baby Huey" Jensen seemed to be the beneficiary. He somehow mised his way into a red-green deck that up to this point in the draft looked the best. Two copies of Pyrotechnics and two War Elephants are making his deck look like the most playable one at the table.

The Dark packs got ripped open and Matt Linde found fat. Leviathan joined his barely playable pile of cards, and whether it helped or not was debatable. The Fallen Empires pack he opened did improve the deck, as he grabbed a Feral Thallid out of the pack.

Walking around the table after the draft and watching the players build their decks it seemed clear who would win this thing. The "Baby Huey" has managed to draft a solid, removal-heavy deck. The red cards he grabbed included the aforementioned two Pyrotechnics as well as a Chain Lightning and two artifacts that do the removal thing; Triskelion and Aladdin's Ring.

Round one matched up Brian Hurley of Wisconsin with Pro Tour regular Matt Linde. Matt Linde did something during the game that no one had done in the last decade or so: he cast Leviathan. For those of you forced that memory out of your mind the Leviathan is a 10/10 creature that comes into play tapped, can't untap unless you sacrifice two Islands and can't attack unless you sacrifice two Islands. All in all, he's worthless.

Game 2 Matt Linde did it again. He not only cast Leviathan, he turned it sideways, using it to actually kill Brian.

Brian was nearly able to take Game 1 from Matt, but when he used the Word of Binding to tap all of Matt's creatures Matt simply cast Crumble on one of his creatures. He gained nine life, I think it might have been Leviathan he did it to, and managed to win the game. Brian ran out of cards. 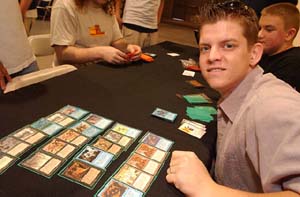 The second match in Round one featured David Williams against Roberto Gonzalez. Roberto stalled early in the game on land, but managed to keep things going thanks to his Elves of Deep Shadow. The mana screw from game was all David needed. He sent Orgg the distance in smashing Roberto's face.

Yes, again, you read that right. Orgg. David Williams was playing with Orgg. David used giant beaters to win the second game. A table full of first strikers and a bunch of creatures that were bigger than 2/2 picked up David and carried him to a round one victory.

The third match in round one featured "Baby Huey" versus Shawn Rohan from Seattle, WA. Jensen appeared to be in control with Triskelion and a banding Elephant on the table to go with his Goblin War Drums. Yes, you read that right, Goblin War Drums. A cry of "Ooooohhhh," went up from the crowd when Jensen played Aladdin's Ring. Two turns later Shawn scooped, nothing he could do about that ring.

Soon, however, the three pros were eliminated, and the finals came down to Roberto Gonzalez, and his Library/Millstone monstrosity, versus Steve Stadnicki who drafted an aggressive red-green with Inferno and Rukh Egg. The first game was decided when Stadnicki realized he couldn't Ali Baba his opponent's Wall of Shadows. Durkwood Boars, his best offensive threat, was useless. Gonzales had the Library working, and soon got to his Millstone. That sealed it. The second game had a glimmer of hope for Stadnicki, thanks to Inferno, but it was not to be. Gonzales's deck was too much, and he walked away champion.