Vintage Round 4: The Cool Mat and Everything

"Man, the cool mat and everything!" said Jimmy McCarthy as he sat down to his feature match against Grand Prix–Columbus finalist Owen Turtenwald.

"Just wait until Goblin Welder gets in there!" the Milwaukee transplant motioned at the fancy red zone in the center of the playmat.

Both players entered the round undefeated at 3-0, though Turtenwald certainly had the momentum of a previous premier level finish going in his favor. Of course, in the world of Vintage, there are more finishes to consider than simply Pro Tours and Grand Prix, and McCarthy could hold his head high with not one but two Top 8s from StarCityGames Vintage events.

Owen won the roll and kept an opening hand of two Polluted Delta, Underground Sea, Island, Force of Will, Trinket Mage, and Mystical Tutor. Jimmy mulliganed a hand with no lands, but kept an Island, Volcanic Island, Mox Jet, Mox Sapphire, and Goblin Welder, which he played on his first turn opposite Owen’s Polluted Delta. It looked like the 1/1 was going to get into the red zone after all.

Owen was quick to Mystical Tutor for an Ancestral Recall while his opponent played Strategic Planning. The Portal Three Kingdoms common allowed him to look at the top three cards of his library, place one into his hand and the other two in his graveyard, and cost just

. An Engineered Explosives for one mana from Turtenwald was able to clear most of McCarthy’s board, which featured a Goblin Welder and Mana Vault. 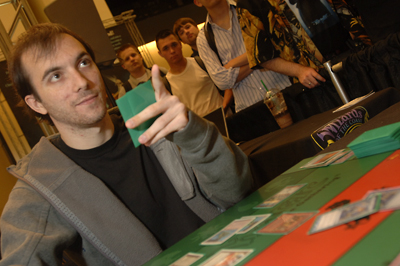 , align=left, cap= "McCarthy passes it back."]The two players traded card draw in the form of Thirsts for Knowledge and Gifts Ungiven leading to flurries of Force of Wills to prevent shenanigans. A Sensei’s Divining Top from Owen was calmly answered with a Gorilla Shaman from McCarthy. The 1/1 Alliances common could assist in keeping the Top in line, but Owen had a techy answer. He played a Painter’s Servant set to blue, then used a Red Elemental Blast to blow up his opponent’s (now) blue-red Gorilla Shaman.

The game had reached a midpoint with both players building manabases and continuing to try to draw cards. Turtenwald was struggling to find the second half of his combo in the form of Grindstone, while McCarthy worked to get some action going, a Sundering Titan and Force of Will stuck in his hand. A series of sac-lands from Onslaught and random attacks with creatures not built to get into the red zone left the totals at 18-14 in McCarthy’s favor, but when Owen finally revealed a Grindstone on top of a hand filled with countermagic, Jimmy packed it in for Game 2.

McCarthy tried a Thirst for Knowledge on his opponent’s first turn, but Turtenwald had opened on the Volcanic Island and had a Pyroblast ready to go. Jimmy’s second copy of the card resolved, though Owen managed to get one of his own off as well. A Strategic Planning for McCarthy started stalking the graveyard for an eventual Goblin Welder and Turtenwald used a Time Walk to Trinket Mage up a Grindstone. 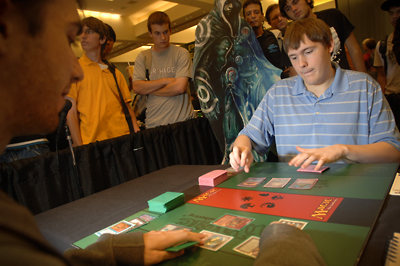 Owen returns fire.The match was clearly demonstrating the falsity of the belief that the Vintage format is simply about the first turn of play, and for the second time in the match the game started dragging on. The frenetic pace of the two competitors, however, made time feel like it was flying by. McCarthy used a Demonic Tutor to find Tinker, likely threatening to plop a Darksteel Colossus into play. Owen seemed unfazed and bashed with his Trinket Mage. His Grindstone, however, met a Mana Drain from Jimmy.

McCarthy’s Tinker netted a Red Elemental Blast from Owen. Jimmy answered with a Mana Drain targeting the Blast, but he had paid full price for his Tinker, indicating he had forgotten about the free mana gained from Mana Draining his opponent’s Grindstone the previous turn. Owen added a Fact or Fiction to the stack, tapping out, still with the Tinker – Red Elemental Blast – Mana Drain stack waiting to resolve. McCarthy split the pile into a Force of Will and two lands or a Thirst for Knowledge and a Yawgmoth’s Will. Could Owen afford to let the Tinker resolve? Could he be "greedy" and take the pile of action spells, hoping to kill his opponent before McCarthy could return the favor?

Ultimately Turtenwald opted to take the Force of Will, then used it on his opponent’s Drain. Jimmy had a Force of his own, and opted to find a Sundering Titan with his Tinker instead of a Darksteel Colossus, dropping Owen to two Moxes and an Island for mana. The follow-up attack with the 7/10 left things tied at 10-all, but an attack with Trinket Mage and some bad luck with a Mana Crypt had dropped Jimmy to 5 and potentially left him dead if his opponent got through with Trinket Mage and he lost the flip for Mana Crypt again.

Gorilla Shaman came down to save the day for McCarthy, eating Owen’s Moxes and shutting off Turtenwald’s Tolarian Academy in the meanwhile. Owen didn’t seem to mind attacking with his Trinket Mage anyway and putting the totals to 3-2 in his favor. He then played a Painter’s Servant on blue and a Lotus Petal. His opponent used the end of turn to eat his own Mana Crypt with Gorilla Shaman but that tapped him out and let Owen Red Elemental Blast the Sundering Titan. His back against the wall, Jimmy prayed for a Yawgmoth’s Will off the top of his deck but instead got nothing over two turns and lost to Owen’s 2/2 and 1/3.