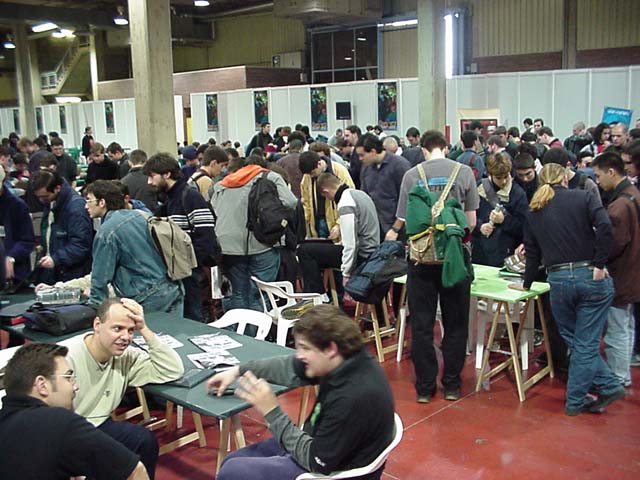 Nine centuries ago the Iberian Peninsula was wrecked by a long war. The Christian kingdoms were hard pressed to stop the Moorish invaders. In the Mediterranean coast a new champion emerged: Rodrigo Diaz de Vivar. Better known as El-Cid ("the lord") this military, and political, mastermind managed to hold off the incoming horde and the internal court political ploys.

History repeats itself this weekend, on a different level. 347 Spanish players again rally to protect their treasures from the incoming hordes: the American behemoths and the European crowd. There are a total of 417 players. The American stars are Pro Tour Los Angeles winner Mike Pustilnik, and the Your Move Games trio: Rob Dougherty, Darwin Kastle and Chad Ellis. From Canada, there is Ryan Fuller. The European legion includes the reigning European Champion Noah Boeken, Mattias Jorstedt from Sweden, from the Netherlands Jelger Wiegersma and Bram Snepvangers, from France we have Olivier Ruel, Raphael Levy and Nicolas Olivieri, and the dynamic duo from England: Tony Dobson and Mark Wraith. Amongst the host of eager Spanish players we have, for example, Hector Fuentes, Xavier Curto Vives, Carlos Barrado and Roc Herms Pont.

The prize: eight invitations to the first ever Spanish, and Iberian, Pro Tour, money, bragging rights and Pro Tour points. On Saturday we will have seven rounds of Sealed deck with the top 64 players earning a place for Sunday's Booster draft. The money purse is the "usual" staggering $25,000. The top 32 players will share $17,500 and the remaining $7,500 goes to the best sixteen players who have a Limited ranking of below 1700 before the tournament.

The battlefield is still vastly unexplored: while we know Invasion deeply, the addition of Planeshift will surely change the balance of power. Just a week ago some of these players where half a world away at the Pro Tour Los Angeles playing Invasion-only Rochester. This is the price you pay to play the game at top level: adapt and overcome or succumb to the ruthless rhythm.

This weekend Invasion-Planeshift Booster Draft is the challenge. Will Black-Blue-Red still rule the metagame or will White or Green finally make a comeback? Some Pros have surely been practicing hard while others - names withheld to spare sensibilities - have absolutely no notion of Planeshift. It will be interesting to see how they will react to this new format. We will take a close look at the changes throughout the weekend.

The excellent judging staff is headed by Cyril Grillon and we have Magic artist Ciruelo Cabral (Presence of the Master, Spellbook and the amazing Remote Isle) on site. So keep tuned for the full coverage of this exciting event.