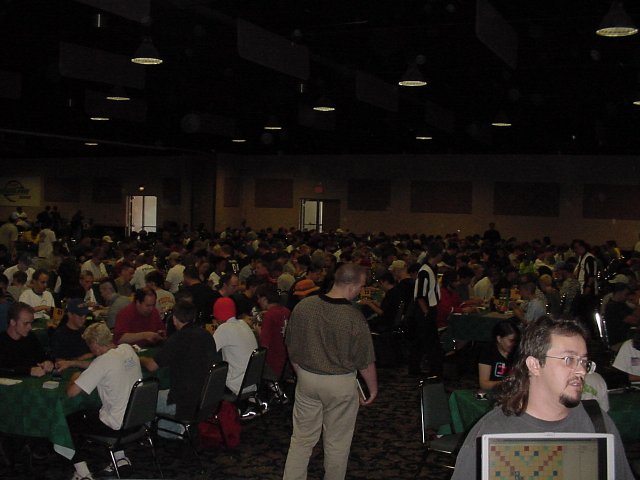 The attention of most Magic players has been on Invasion Block Constructed for weeks and weeks, but this weekend is the first time the Pros have played the format since Apocalypse came out. With 403 players competing here and 1,350 (yes, one thousand three hundred and fifty) playing Grand Prix Kobe, we should know a lot about full Invasion block constructed by the end of the weekend. Grand Prix Denver will define this metagame much more effectively than qualifier results and internet strategy articles ever could. Knowing the metagame will be crucial to upcoming qualifiers, including Grand Prixs in Santiago, London, Minneapolis, Warsaw, Singapore, and Oslo. How much red-green beatdown do you have to worry about? Which colors really make for the best control deck? Is the format really all about 2/2 creatures plus bounce and counters? Is green/blue really the king and, if so, which is the best third color to splash in? Hopefully we'll all have the answers to at least some of these questions by Sunday night.

This is the first weekend of the 2001-2002 season, by the way, so whoever wins Denver will be tied for first in the Player of the Year race with whoever wins Kobe.

While most Magic players have been thinking about IBC for weeks and weeks, this weekend is the first time the Pros have turned their attention to it since Apocalypse came out. Since the always-grueling Worlds just ended six days ago, many of the American Pros simply aren't as prepared for Denver as they are for most constructed events. A couple (including Jon Finkel) decided they needed a break from Magic and took the weekend off, but most of the regulars are here. Some claim to be totally unprepared while others actually are.

Brian Kibler claims he and his crowd broke the format Saturday morning. They logged onto the Sideboard and check out the Grand Prix Kobe results - due to the time change, Kobe's 9-round Day 1 is over and they've already cut to the top 128. Better still, the decklists of the four undefeated players were already posted! Nine rounds and thirteen hundred Japanese can't be wrong, can they?

Zvi Mowshowitz - who won the IBC Pro Tour back in Tokyo - told me he thought about putting a Domain deck together, and he liked the possibilities he saw, but he just didn't have time to tune it so he just updated his Tokyo-winning "Solution." Basically, he just replaced Crimson Acolyte with Spectral Lynx and threw in one piece of high technology: Lashknife Barrier. The Barrier can save him from his old nemesis - Plague Spitter - and it could be quite powerful if the format is really all about 2/2 creatures running into each other. Zvi also couldn't stop giggling about the crazy things he can do if he sideboards in both Unnatural Selection and Pure Reflection (the reflection destroys all "reflections". Baby Huey was also seen shuffling up a Solution deck while practicing Friday evening, but he hadn't yet made up his mind what he wanted to play.

Reigning U.S. national champion and world team champion Trevor Blackwell has a green-blue deck beatdown deck with a splash of red for burn. His trick is two copies of Emblazoned Golem. He felt the deck needed a few more creatures, especially creatures that could block Spectral Lynx, so in went the Golem. Dave Price is also running green-bleu beats with a red burn splash, and he claims Prophetic Bolt is one of the best cards in his deck.

Red-green beatdown and Go-mar are also expected to show up in significant numbers, though there are so many varieties of blue-black-white control out there that it's probably not fair to lump them all under the heading "Go-mar." Like I said, we'll know a lot more once the weekend is over and I'm looking forward to figuring it all out just as much as you are so stay tuned for live coverage and metagame analysis.