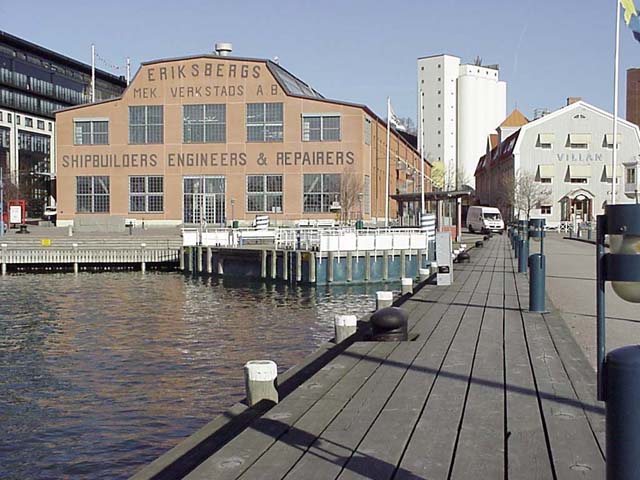 It's sunny, but still kind of chilly in Gothenburg, Sweden. The Göta River silently floats past Eriksbergshallen, the big hall that is the venue of 2001 Grand Prix Gothenburg. Greeted by a registration area, then Magic artwork and information posters, around 450 players from Europe and America have come to the Swedish city to play Magic. Players who want to have some fun, to play the game and to possibly win some money and a claim to fame.

The site is more or less like any other tournament site. Fortunately, the hall is big and the ceiling is high, held up by huge metal constructions giving the site an industrial look. Windows on each side of the slightly arched roof let the sun into the room. All over the floor, tables are put out and clad with the oh-so-familiar green tablecloths. In the back of the room, you find the stage with the judge's station and the tables where the Sideboard reporters are located.

Big banners with the mana symbols on them hang from the walls, along with some artwork - for instance Tolarian Academy, Gaea's Cradle and Phyrexian Defiler. A Grand Prix banner is put up on the stage, and two huge timers keep track of the time.

As usual, players from a lot of different countries have come to the Grand Prix event. Many of the pros are present, to mention a few: from the United States, winner of last week's Pro Tour Tokyo, Zvi Mowshowitz and top 8 finisher from the same event, David Williams. From Canada, top 8 finisher from Tokyo and winner of the Tokyo Masters, Ryan Fuller. From Norway, a whole bunch of players, including Sigurd Eskeland, Nicolai Herzog, Eivind Nitter, Øyvind Ødegaard and Sturla Bingen. From England, Ben Ronaldson and Tony Dobson. From France, Olivier Ruel, Raphaël Levy and Franck Canu. From Russia, Konstantin Firsov. From Denmark, Svend Geertsen and Trey van Cleave. From the Netherlands, Bram Snepvangers. From Germany, Kai Budde and Dominik Hothow. And from Sweden - Olle Råde, the Cederkrantz brothers, Jens Thorén and a lot of others.

Two of the dominating players in the last few Grand Prix events couldn't make it though. After two weekends of Magic in Prague and Tokyo, both Antoine Ruel and Noah Boeken chose to stay at home to be with their girlfriends instead of going to yet another tournament.

The format for Grand Prix Gothenburg is Invasion block sealed deck. After the first day is over, the top 64 players will get to play Invasion block booster draft on Sunday. Jaap Brouwer from the Netherlands is the head judge, and he and his crew of judges will make sure that everything runs smoothly. "I'm going to be their favourite judge, I'm going to make them feel good. And I'm even going to make sure that when they have three losses, they'll still have a good time," Jaap laughs.

Regardless, everything seems to be in place for a great tournament. In spite of a few problems with people double-registering for the event, the event started just a couple of minutes past ten. Martin Jordö, the Swedish manager for organised play, held a small speech before Jaap Brouwer took over the microphone. After welcoming words and some instructions, the deck construction could start - and the roar of plastic boxes being opened went through the room before people dove into the task of making the best deck possible.

The Sideboard Staff will be present throughout the tournament to bring you the latest of what's happening in Gothenburg. So if you want to see what's happening, then be sure to check by every now and then. It's gonna be a glorious day!