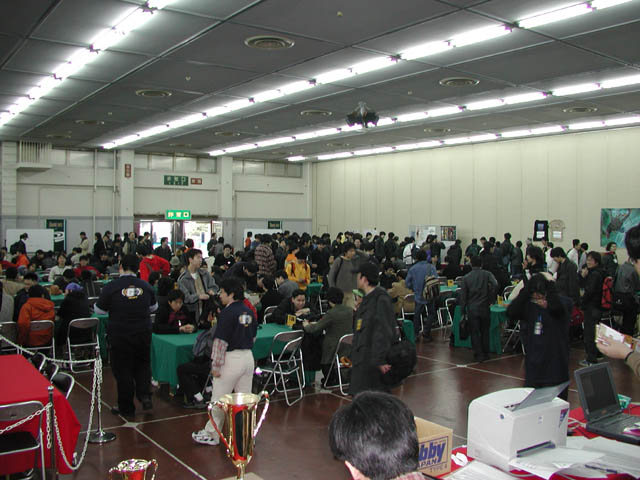 The day is seen in under the shroud of a slight spattering of rain. On the way to venue we hear on the radio that a blizzard has hit Tokyo and lightning warnings have been issued. I hope that the only type of storm we are going to see here today is the Meteor storm type being played on the table.

The four hundred-plus competitors were forced to endure the elements until 9.30 when the doors were opened and the masses poured into the venue. People were running to the Hobby Japan Table to purchase their Magic trinkets and toys as well as the many dealer tables situated around the hall. You can find any magic card you could ever want here today. The selection includes complete sets of Beta singles, every foil or promo card ever printed as well as any single from Standard.

A taste of what to come tomorrow adorns all four walls of the building too, with Planeshift banners boldly advertising the Pre-Release of the first expansion in the Invasion Block.

With many of the Japanese top guns being present we are in for a real treat. The field includes current Japanese National Champion Tsuyoshi Doyama, two time and current APAC Champ Masaya Mori, and one of the biggest personalities in the game, 1998 APAC Champ, winner of GP Sapporo 2000, Satoshi Nakamura.

The hall has fallen under the silence of concentration, which can mean only one thing, deck construction has begun.

Will we see the current trend of blue black red being played by the top players, as done so by many of the pros at GP Amsterdam two weeks ago? It seems that most players agree that this seems to be the strongest color combination for Invasion limited, with the best common removal available and powerful draw and disruption spells like probe making for a lethal deck.

We will see if this holds true as the day unfolds, so stay tuned for regular updates of round details, results and feature match reports.