Where are they now?

It's 1995 all over again, as a ton of New York and New Jersey players came out of retirement to play at Grand Prix New Jersey. Many former Pro Tour players showed up for this event, forming teams made up of competitors who last played with the Magical Cards around the time of the Stone Age expansion. I asked several of them what they had been up during the time of their absence from the game.

Ben: So what are you guys up to, in real life?
John Chinnock: I'm doing stock trading with Glen Friedman these days. (Glen founded Neutral Ground back in the day).
Eric Phillips: I'm a banker in Manhattan.
David Bachmann: What was the question again?
Eric: Just put down that Dave is a concert pianist.
Ben: Is he really?
Dave: Sure, why not. 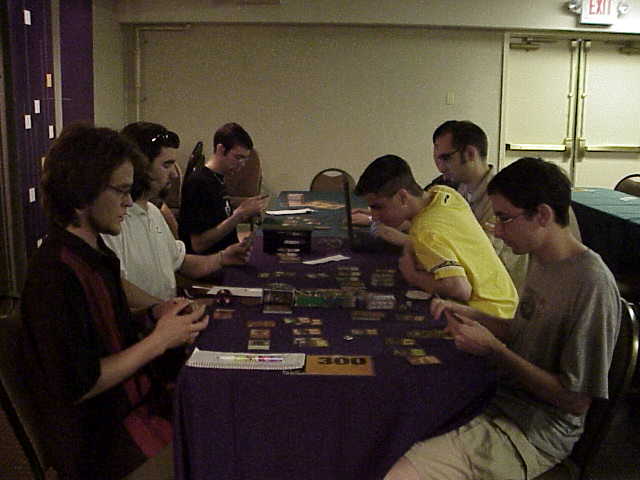 John Chinnock: And put down that Mike is playing cello in Dave's orchestra. Ben: And what are you doing these days Feming? Feming: I'm in school now. Ben: Ok, I'll put down you're a student.

TEAM UPPER DECKER (Matt Wang, Brook North, Andrew Diaz-Matos)--Neutral Ground regulars, these three guys are as legendary for their drinking abilities as their magical ones. Rumor has it that Brook has won more than his share of games while in a state not quite of sobriety.

Ben: Hey guys, what's going on?
Matt: Hey Ben!
Brook: Yo.
Andrew: What's up?
Ben: I'm doing a feature for the Sideboard, called "Where Are They Now?"
Andrew: We're right here.
Ben: I mean what are you guys doing with your lives these days.
Matt: Just put down that I'm in investment.
Ben: No more than that, eh? Guess you're into shady dealings as always.
Matt: Yup, that's me.
Ben: And Brook, you're working for USA Networks now?
Brook: Yup. I'm a lawyer for USA.
Ben: What about you, Andrew?
Andrew: I'm a mergers and acquisitions lawyer. 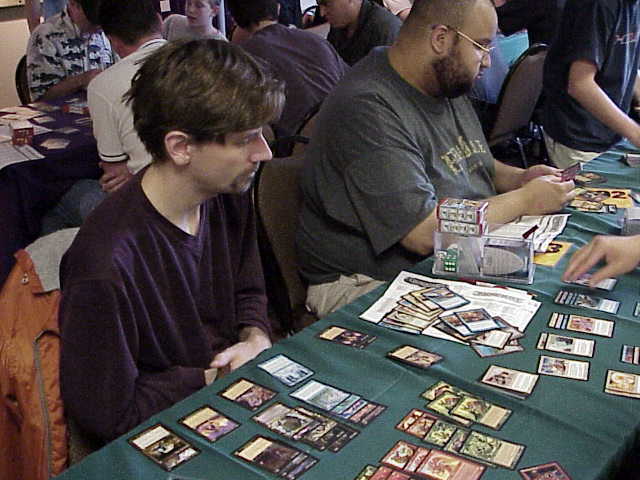 It seems as if all the old New York players/former Jersey Kids are either heavy into the financial sector or lawyering. I guess all those years of playing Magic paid off for them, using the mental skills they honed through learning the rules of Magic and applying them to banking and legal systems. But what about the grandfather of all comebacks, and king of money drafts? I speak of none other than Brian Hacker, from California.

Ben: Brian, what are you doing in real life these days?
Brian: I'm actually doing game design.
Ben: Really?
Brian: Yes. I designed part of the NBA game that Wizards used, and I'm currently working on a trivia game as well. I have other dealings on the side as well.