Granted, Kuala Lumpur isn't exactly next door for most people, but it's surprising to see so few foreigners in attendance. The timing is a little off. It's just two weeks since Pro Tour - Osaka. Even discounting jetlag, it's hardly worth the hassle and expense for most, particularly those who happen to live outside of Asia.

Ordinarily you'd expect twenty or so Japanese pros at an event like this. However, this weekend is the Japanese Regional Championships, and most of the brightest lights are out validating their reputations at those events. Only three of the biggest names are in attendance: Panzer Hunter's quiet mastermind Itaru Ishida, two-time Grand Prix Champion and philosophical thug Masayuki Higashino, and Tsuyoshi "Mr. Rolly" Fujita, now known more for his move-busting than the prodigious skills that brought him to the Magic Invitational. All three have secured invitations to Japanese Nationals, and thought it best to relax with a little high-octane gaming.

Just two Americans planned to make the trip, and both were plagued by adversity. Sideboard Columnist and Lord of the Asian GP Alex Shvartsman ran afoul of the Malaysian border after spending a leisurely few days with friends in Singapore. Shvartsman was not about to be defeated so easily. Our intrepid hero sought emergency help from the American Embassy, and though initially denied, he turned on the charm and managed to wrangle a solution. Today he is enjoying his three byes to the fullest. 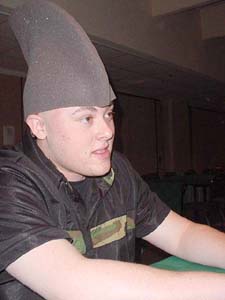 Would you let this man on a plane?Not so lucky was Peter Szigeti. The Outspoken Magic Colonist figured this Grand Prix would be an easy chance at much-needed Pro Points and a bit of scratch. Well, his Master Criminal tendencies got the better of him as he was denied boarding on his flight. Though the reasons for his being refused passage are unclear (and possibly unsavory), one can be sure that Szigeti was not the picture of grace as he tried to argue his way onto the flight for three hours. If he was Gene Hackman, he was more Royal Tenenbaum than Lex Luthor. He will have to enjoy the Grand Prix from the comfort of his easy chair this weekend.

So with the big names from abroad largely absent, the stage is set for the heavy Malaysian and Singaporean contingents to dominate this Grand Prix.