Where in the World is Zvi Mowshowitz? 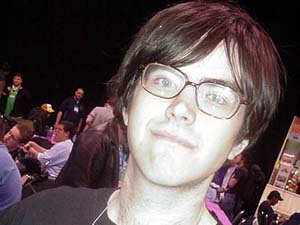 -eyed observers will notice the absence of Zvi Mowshowitz in the tournament pairings despite the fact that he was announced as participating in the tournament in the introductory blurb. Zvi did indeed register for the tournament but dropped prior to the start of the second round-long before he had even used up his full complement of byes.

The Grand Prix is taking place within the confines of GenCon SoCal. The event is the first attempt by Peter Adkinson's convention business to expand their sphere of influence beyond the borders of Indianapolis. (Traditionally, GenCon was held in Milwaukee but the mother of all gaming conventions outgrew the Milwaukee Convention Center.) There are many different events going on all weekend for a myriad of games. Wizards of the Coast premiered the English language edition of their new Duelmasters, Jeff Donais could be seen hawking Yu-Gi-Oh, the L5R tournament could be heard by all as the players shouted in unison at the beginning of each round (quickly followed by derisive snickers from the Grand Prix competitors, and-among much, much more than I could possibly recount--there was a prerelease for a new collectible game called CyberPunk.

The last item was the reason Zvi had to drop. Not to play but to coordinate. It turns out that Zvi was the lead developer on the game and has accepted a position with the company to become their lead designer. "I am here to GM the CyberPunk prerelease and demo the game. I learned after I agreed to come here that there was a Grand Prix at the same time."

Zvi signed up for the tournament (he would have played Angry Hermit, FYI) and was prepared to play if the turnout for the Cyberpunk event was less than they were expecting. It apparently exceeded expectations because Zvi dropped and could be seen shepherding players through the rules of the new game as they battled for the $500 first prize associated with the new game's tournament.

Zvi is going to be relocating to Denver shortly to work full time at the company but expects to keep up with the game of Magic. "Magic will no longer be my primary focus but I will continue to play on the Pro Tour and I will continue to do my column for Brain Burst."

We wish him and the new game the best of luck!