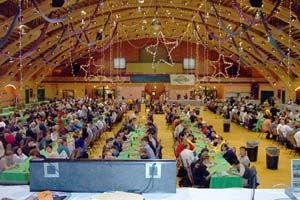 Can you find Zvi Mowshowitz in this picture? Zvi Mowshowitz is missing! Zvi attends nearly every United States Grand Prix available (and then a good number overseas), so his absence at this event is conspicuous. I learned through Sean McKeown that he's undergoing minor surgery this weekend (more of a diagnostic really), so we wish you well Zvi! In honor of his disappearance, we asked a number of players for their favorite memories of Zvi. Here's what they had to say:

Sean McKeown: This story was relayed to me by a Neutral Ground employee, and happened a year or so before I started working there. It was Christmas Eve, and there were a few people at the Ground drafting. Zvi was one of them (since he's Jewish), and the staff that night was really eager to get out early, since it was Christmas Eve and all, so they weren't really paying attention to who was there. So after his last draft of the night, Zvi apparently laid down to take a nap, and while he was sleeping in the back, the employees kicked everyone else out of the shop, and closed up at 10pm—locking Zvi in! Since the Ground was closed on Christmas day, Zvi wasn't found until December 26th, when they finally let him out of the shop!

John Sonne: Once, I was taking a cab with Zvi and Eric Ziegler from the airport to the hotel in Barcelona. Zvi was explaining his strategy for the weekend to us, saying that he would always try to draft a deck for himself, and not pay much attention to the colors being drafted by his neighbors. The next day, we walk by and see Zvi at the 0-3 table, his head hung in shame and disbelief.

Alex Shvartsman: Just the other day, one of my friends asked Zvi, "Would you kick a 3-legged puppy?", and without hesitating, Zvi said "yes!"

Dan OMS: At Nationals in 1999, Zvi is playing some kid from Texas for a slot on the national team (Worlds took place in Yokohama that year). The kid has been talking complete trash the entire match, just being really obnoxious. So they go to Game 3, and the guy plays turn one Mother of Runes, turn two Mother of Runes: one in English, and the other in Japanese. Zvi gets a nuts mana draw and has a Masticore in play on turn 3 with plenty of mana to use it. He taps two mana and says "Shoot the Mother for 1". His opponent goes to place the English one in the graveyard, but Zvi says "no, kill the other one." The kid protests saying that it doesn't matter which one goes to the graveyard, but Zvi is adamant about removing the foreign copy. Finally, Zvi says "Ok, you can keep the Japanese one, cause you're not going to Japan!"

Joshua Claytor: Zvi was at Grand Prix Atlanta and playing next to Mike Long and my fiancé. He notices Mike doing some really shady stuff with sideboarding and rushing her, and after the match (which Mike won), Zvi gets the head judge and tells the judge (Thomas Pannell) and tells him what he saw. The judge investigated, and it resulted in Mike getting a match loss, which eliminated him from the tournament. 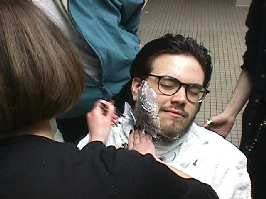 For his first Pro Tour Top 8, Zvi got a makeover, complete with a professional shaveEric Kesselman: My favorite Zvi story was the one from Pro Tour New York, where he made day 3. That's the one where they dragged him into the back, bathed him and shaved him.

Jon Becker: There were some people playing poker, and Zvi didn't know how to play. He wanders over and asks "what's that?", and I tell him it's poker. He sits and watches for a while, and seems interested so I offer to lend him a book I have in my backpack about poker strategy. He seemed really excited about the book and wandered off to read it. I haven't seen the book since, and it's been years. I'm not mad though.

Brian Davis: At Pro Tour Chicago 2000 I ended up hosting Scott Johns, Seth Burn, and Zvi in my room. We're just sitting around, and Seth notices Zvi's fingernails are getting really long, so he offers Zvi a nail clipper. Zvi takes it, looks at it for a minute, then asks "What is this for?" Seth had to sit there and literally explain to Zvi how to use it! I just wish Zvi was here today, he's amazing at figuring out the best strategies for a block fast. Then I could just ask him for advice, like should I force mono-white.

Antonino DeRosa: At Pro Tour Rome, Zvi shows up at the airport with a backpack full of Magic cards—and nothing else, no clothes, nothing. Just Magic cards.

Tim Weissman: I remember at Grand Prix Las Vegas, all of us (the organizers) were really tired, and it was 7am. We just wanted some quiet, but all we heard for two hours was Zvi having a loud conversation at the top of his lungs. And he was on the other side of the large room!