Team GP's are always special; some teams have been together for ages where as others are often created for one specific tournament. The following list is in no way comprehensive, but hopefully you can find the player you are looking for. 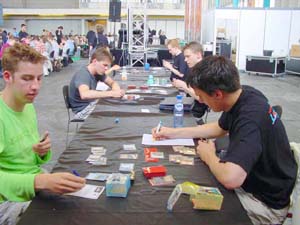 Angstschreeuw
Yes, this is actually a Dutch word. They have been together for a while now making top 4 at GP Turin. Bram Snepvangers is the best know player on this team, but Jos Schreurs has won an individual GP and Menno Dolstra has his own fanclub.

From across the border 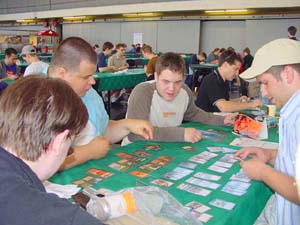 Phoenix FoundationPhoenix Foundation
The best team in the world, now sporting three National Champions. Baberowski, Blume and Budde haven't won a GP yet. Will they still need that title after this weekend?

The Unknown Stuntment
Scott Wills and Pete Norris once again manage to drag Tony Dobson out of retirement for a team tournament. Despite terrorizing the English PTQ scene year after year they're still looking for a breakthrough performance.

Outland
There is this group of Norwegian players that always team under the name of outland someway or another, this year we have the teams: Plan 9 from Outland featuring Sigurd Eskeland, Endre Skjetne and Øyvind Ødegaard. And Outland 2003 consisting of Eivind Nitter, Nicolai Herzog and Lovre Crnobori.

Object of Affection
Tomi Walemies, Anton Johnsson and Jens Thorén. Punisher's finest should be able to make their way to Sunday's drafts.

Kai's gonna get it
Calling this the other Punisher team doesn't do these guys justice. There is no doubt Mattias Jorstedt is hot at the moment and Mikael Polgary and Mattias Kettil are no slouches either.

Goldmember
Olle Råde, Rickard Östenberg and Morgan Carlsson. Earning his fame years ago the littlest Viking still shows up now and then, this time with two solid players accompanying him. 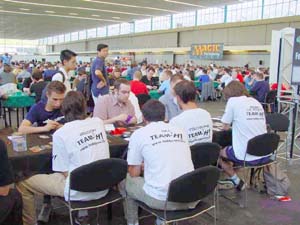 Hobby OneHobby one
Black Ops is still together, Florent Jeudon and Antoine and Olivier Ruel have been together since the beginning of serious team competition don't let the new name fool you.

Wesh Wesh Crew
Amiel Tenenbaum and Gabriel Nassif are teaming with Fahrid Meraghni this time around.

Magiccorpration.com
Another team full of top players, Franck Canu, Raphael Levy and Christophe Haim are ready to take on the world.

Courtney's Men
Apparently switching Gary Wise for David Williams makes them leave their "boy" status behind. Let's see if these "men" can show us what they are worth. 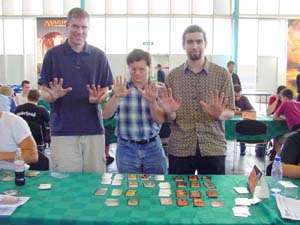 Free Pat ChapinFree Pat Chapin
Ed Fear, Michael Pustilnik and Andrew Stokinger. Pustilnik is the player with the most success, but the Stokinger and Fear have their own reasons to be famous.

The Only Barns In Town
With McCord back home Gerrard Fabiano and Jon Sonne don't feel like Slaying and Pillaging all that much. Instead of their usual third Antonino De Rosa is rounding out this team of Pro's.

Ace Ten Off
Eric Froehlich and Kamiel Cornelissen have been teaming together for a while. Picking up Jon Finkel as their third, may give this team the edge they were looking for.

JC Experience
Patrick Mello, John Larkin and Sam Gomersall. Gomersall is the lesser known of this trio, however his recent finishes on the GP circuit have been very solid.

Dan Clegg Uncut
Noah Boeken and Alexander Witt are both from Amsterdam and each have a Masters title. However it is Brock Parker who won the last European team GP together with Dan Clegg and Peter Szigeti.