Professional Magic players such as Brian Kibler, Luis-Scott Vargas, Martin Juza, Reid Duke, and Owen Turtenwald credit the time that they spend preparing on Magic Online as a key ingredient in their recipe for success. And with good reason.

Thanks to Magic Online, if you want to do a draft, build a Sealed Deck, put together a new Modern deck, or get a few more repetitions in with the Standard deck that you've been carefully tuning for months - then you don't need to coordinate your schedule with anyone else. You just need to log onto Magic Online, and enter a tournament against players from every corner of the globe. Do that for a few hours, days, weeks, or years – and you'll inevitably see your play improve significantly.

However, if you're looking to break your way into the world of Professional Magic - then Magic Online's usefulness extends far beyond serving as a training ground. If you win the right events you can earn invitations to play on the Pro Tour, as well as the Magic Online Championship without ever leaving your living room.

The clearest example of a player who has leveraged his Magic Online success into a professional Magic career is none other than the reigning Magic Online Champion Reid Duke.

Despite the fact that he rarely played in paper Magic tournaments during college, Reid "reiderrabbit" Duke nonetheless planned his sleep schedule (regularly setting his alarm to wake him up at 4AM or 6PM) so he could play in the best Magic Online tournaments. This dedication began to pay off for Reid when he secured an invitation to the 2010 Magic Online Championship.

Reid finished that event in 5th place, and while he was encouraged by his performance – he also realized that there was a lot more for him to learn. 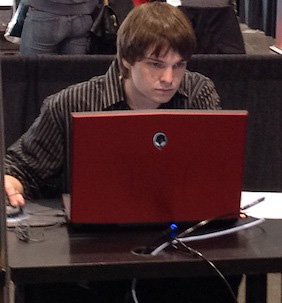 So he redoubled his efforts, and less than 18 months later Reid (who now prepares for events alongside Jon Finkel, Kai Budde, Sam Black, and many other luminaries on Team Star City Games) has added 6 Grand Prix Top 8s, quite a few Pro Tour money finishes, and the title of 2011 Magic Online Champion to his rapidly growing resume.

The 16 players who have earned their coveted invitations to this year's championships will be playing 4 rounds of Gatecrash Sealed Deck, followed by 3 rounds of Cube Draft on Friday, and 4 rounds of Standard on Saturday before the top two players advance to the finals.

So be sure to follow along as these players compete for their shares of not only $116,000, but also an invitation to the 2013 Magic Online Championship, and the 2013 World Championship.