2007 Magic: The Gathering World Championships have just gotten under way with 387 competitors representing 61 countries, the largest World Championship on record. First up for competition is the Standard format which has been shaken up quite a bit since a number of control decks took the top honors at the recent Grand Prix–Krakow. Will Sonic Boom and Blue-White Pickles return to take the top slots at the World Championships? We've got five rounds before we'll know for certain, but a quick check with the dealers revealed plenty of blue cards still in stock. The best sellers? Said one dealer "If it's uncommon and in Coldsnap, we're out." 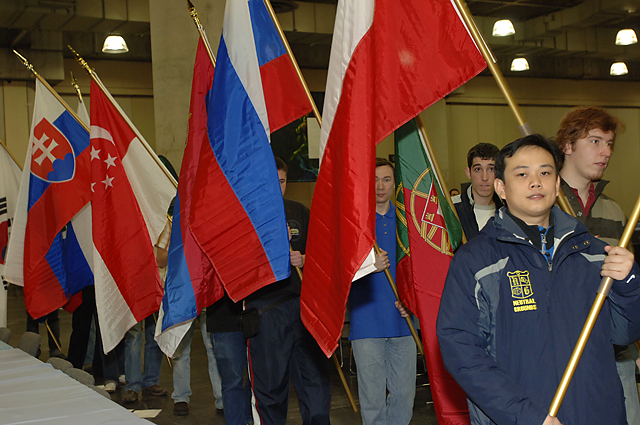 The parade of national champions.

The ceremonies kicked off Friday evening with a parade of national champions proudly carrying in their respective countries' flags. Following that the 2007 Hall of Fame class was inducted and Zvi Mowshowitz, Randy Buehler, Tsuyoshi Fujita, Nicolai Herzog, and of course Kai Budde joined the game's elite classes from 2005 and 2006 in being recognized as some of the best to ever sling spells. Fujita, surprising everyone by dressing up in a kimono-style tux, stole the show when his achievements and contributions to the Japanese Magic scene, now the most dominant country in the game, were regaled for all to reminisce over (though to be fair, the applause for the one and only Kai Budde threatened to extend the ceremony late into the night as it seemed everyone in the house was excited to see the return of the Juggernaut). 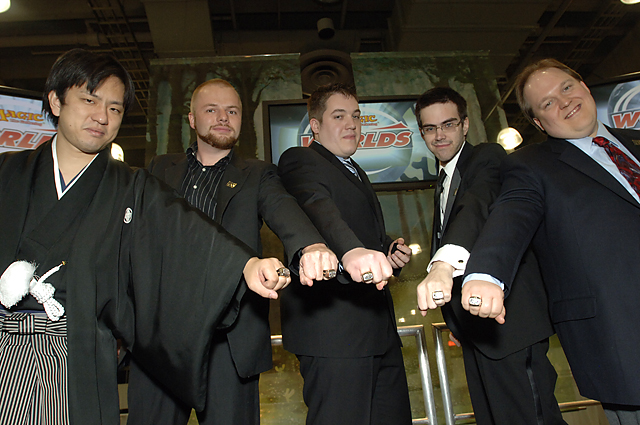 From the front of the hall the ever-present Serra Angel statue keeps a close guard on all those who enter and leave, and this year her task is even more important: she stands watch over the Toyota FJ Cruiser being given away to one lucky tournament participant later this weekend. The car, which features special Magic side panels, will be awarded to the winner of a special tournament on Sunday. To qualify for that tournament players won slots in a number of Northeast Challenge qualifier tournaments held over the past year across the United States. And if you don't live in the United States or couldn't find one of the NEC Qualifiers? Players also have nine chances to win a slot this weekend at events running concurrent to the main tournament.

Following the five rounds of Standard on the first day of competition, players will sit down for three rounds of triple Lorwyn booster draft. Friday they'll return for three more rounds of draft and then five rounds of Legacy, a format new to the World Championships. It seems the professional community, which can't rely on Magic Online to test the format in its entirety, isn't quite sure what to make of the unique addition to the schedule. Some theorized that players would replicate their plans from the 2006 World Championships in which numerous pros simply defaulted to the red-white aggro deck called "Boros" for Extended, seeking a consistent deck able to take them to the Top 8 instead of hammering out the nuances of the format. Will that mean lots of Goblins and Threshold with little innovation? We'll have to wait until Friday to see, but somehow it seems likely we'll see a few surprises.

Saturday will feature the team competition in which all the teams representing countries officially will compete in Two-Headed Giant drafts. Over the course of six rounds they'll do three separate drafts with the top two finishing teams competing on Sunday during the Team Championships portion of the final day. Opposite them will be the individual event Top 8 in which the 2007 Magic: The Gathering World Champion will be crowned!

Check back throughout the day as your coverage team brings you the latest news from the front lines.