Of the Thai World Magic Cup team, three have never played on the Pro Tour before, two have never been to America before, and one is Matt Marr. The American, working as an English teacher in Thailand, is confident that in spite of this, Thailand is set to break out here at the World Magic Cup.

The Thailand Magic scene is heavily focused on its capital, Bangkok. Three of the four team members hail from there, and play in various of the ten or so shops in the city. While Thailand has had just a single PTQ each season recently, it has had three players at the Pro Tour for much of the year, thanks to Marr's player level and snagging a Magic Online PTQ win. With the World Magic Cup and four players travelling to the USA, a real team spirit has come out, with dedicated testing sessions unlike anything seen in Thailand before. 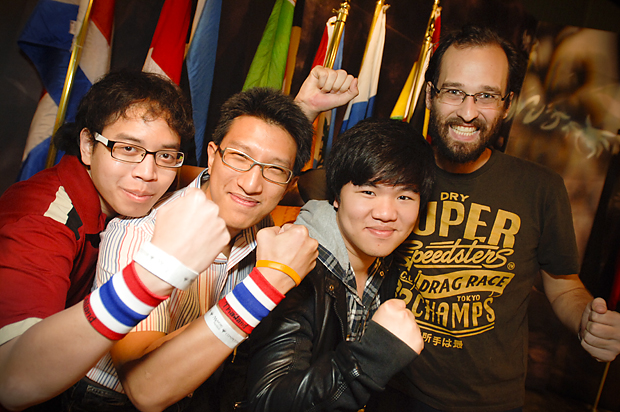 Team Thailand hopes to improve on its previous international finishes and crack the Top 4 of the World Magic Cup.

Every week, a snapshot of the metagame based on both Magic Online and live tournament results has helped the Thai testing stay fresh. Meanwhile, the first thing that team Thailand did upon getting hold of Magic 2013 packs was to start building Team Sealed decks. Drafting is a very big deal in Bangkok, with plenty of opportunities for drafting just about every day of the week, which, combined with the love of Constructed held by the team members, has meant that testing has been frequent and intense.

With hundreds of games played out, the team is confident that it will represent well, and that the World Magic Cup will be a stepping stone to future greatness for a country still finding its feet in the international Magic scene. While there are just four players in the US representing Thailand, there is a whole host more back home who have been involved in getting the team where it is. This team spirit is why there can be such confidence that, with each passing year, Thailand can improve upon past performances and be a consistent player on the international stage. With a 9th-place finish in 2009, there are high hopes that Thailand might be able to make that final leap, aiming at Top 4 to snag Pro Tour invites for Pro Tour Return to Ravnica.