As has been the case throughout this Top 8, the wrath that Brian Kibler wrought—also known as the Innistrad Block Constructed Jund deck—was facing down in a near-mirror match in the Finals.

Chinese Taipei's Tung-Yi Cheng had a slightly different version, dipping into white mana—splashed off a single Plains and Borderland Ranger with Abundant Growth and Avacyn's Pilgrim for help—for the powerful Restoration Angel. In its place, Puerto Rico's Cesar Soto was playing the hasty and often game-breaking Falkenrath Aristocrat.

Cheng and Soto had already secured Pro Tour invites—neither was previously qualified before this weekend—but the match meant something bigger than that. It meant bragging rights for a year. It meant a fancy trophy. And it meant a place in history.

Cheng made the first move with an Avacyn's Pilgrim, fixing his mana along the way with an Abundant Growth and Evolving Wilds. One of the marks of the Jund deck was how good its mana could be once it got moving.

Soto, meanwhile, had used his own Evolving Wilds to find a Mountain, but he had no action on turns one or two, possibly signaling some larger game waiting in his hand. Stuck on the draw, however, he likely didn't have time for that to matter.

Cheng struck the first large blow, casting Huntmaster of the Fells, nabbing a token for his trouble. Soto kept it from flipping with a Bonfire of the Damned for 1, but Cheng simply replaced the mana source with a Borderland Ranger, fetching up a Forest.

Soto finally got on the board on turn four with a Falkenrath Aristocrats, but it died as soon as Cheng passed back the turn, getting a flipped Ravager of the Fells for his trouble. 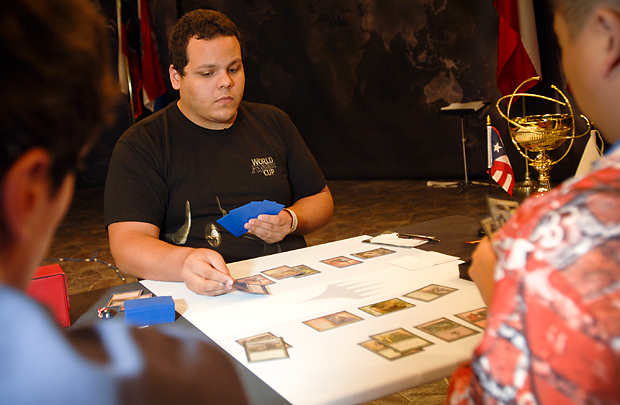 A slow hand doomed Cesar Soto in Game 1 of the finals.

Then disaster struck for Soto. He attempted to Tragic Slip the Ravager of the Fells, but Restoration Angel—the key difference between the decks—not only saved the Ravager, but gained Cheng a second Wolf token and gave him more than enough attackers for lethal damage.

Cheng found himself staring back at a hand with five lands and only a Bonfire of the Damned and Devil's Play for action, quickly choosing to send it back before settling on a better six.

Once again, Soto had kept a hand soft on early pressure and lacking green mana, but what he did have was a Tragic Slip for Cheng's Avacyn's Pilgrim.

The green mana came quickly for Soto, however, as he never missed a beat playing a turn-four Huntmaster of the Fells with some help from an Abundant Growth. The Huntmaster died to Sever the Bloodline, but a Falkenrath Aristocrat replaced it.

Cheng's mana, though, wouldn't cooperate. Three Forests and a Swamp were exacerbated by Soto's miracle Bonfire of the Damned for 4. But with no creatures on Cheng's side of the board, Soto could come to rue wasting the Bonfire as a glorified Fireball.

A Tragic Slip on the Aristocrats kept Cheng from falling further behind, and an Appetite for Brains revealed Sever the Bloodline as well as Borderland Ranger and a Tragic Slip, meaning Soto was out of big threats for the time being, especially once his Wolf token traded with Cheng's Borderland Ranger.

Soto made a Ranger of his own and passed before losing the 2/2 to yet another Tragic Slip.

Cheng found some pressure of his own in a Wolfir Silverheart, but could only smile appreciatively as Soto made a Huntmaster of the Fells on his very next turn.

Cheng, however, simply played another.

With a two-turn clock on the board now, Soto was looking for a miracle, both literal and figurative. His deck had other ideas, however, granting him Forest after Forest.

With no way for his opponent to remove the second Silverheart, Cheng swung for lethal, putting Chinese Taipei up a quick set in the match. 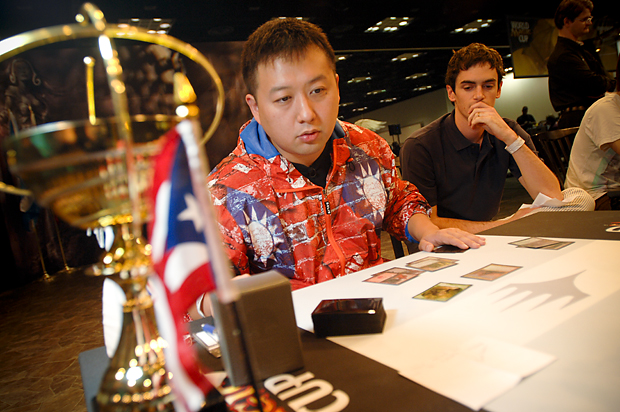 A plethora of removal spells and giant creatures handed Tung-Yi Cheng and the Chinese Taipei team the first blow of the finals.