Coming into this final, Tzu Ching Kuo of Chinese Taipei is without doubt the player to watch. With a storied Pro Tour and Grand Prix resume that includes enough Pro Points to be a consideration for Hall of Fame, he leads a team that has been dominant throughout the World Magic Cup. His opponent, Jorge Iramain of Puerto Rico, might not be as well known a player, but with a hyper aggressive Affinity deck in his hands against the white-blue control favored by Kuo, we should have a finals match to remember.

Tzu Ching Kuo started out with a Celestial Colonnade, giving Iramain a one-turn window to have an explosive start. The only turn-one play from the Puerto Rican was a Signal Pest—not the most terrifying of Affinity starts. A turn-two Arcbound Ravager was hit by Remand, and the National Champion of Chinese Taipei had a Spell Snare at the ready to stop it when it came down a second time.

A Vendilion Clique was hit by Galvanic Blast but still got to check out a hand of Shrapnel Blast, Vault Skirge, Cranial Plating, Etched Oracle, and Arcbound Ravager. Following a little thought, the Oracle went to the bottom of Iramain's deck.

Now that Chinese Taipei had close to perfect knowledge of what was coming, it meant resolving the big threats would be tough. A Path to Exile took out Blinkmoth Nexus without even getting Iramain a land, as he already had his basics in play, slowing Iramain's attack to a crawl. While he was able to get one Vault Skirge down, a second was stopped by Spell Snare as Snapcaster Mage allowed flashback of the powerful counter.

The third Vault Skirge came down, but only as another replacement; the Chinese Taipei National Champion had another Path to Exile to work with, along with a Spell Snare for Cranial Plating. Iramain had to try something. He cast another Cranial Plating the following turn. Kuo quickly and crisply cast Restoration Angel to flicker Snapcaster Mage and get another chance to cast Spell Snare.

A Dismember killed off Vault Skirge, and there was yet another Spell Snare for Arcbound Ravager. While the Puerto Rican had a Shrapnel Blast for Restoration Angel, he was still in rough shape for the first game. A Remand on Arcbound Ravager was enough to lock up the first game in Chinese Taipei's favor. 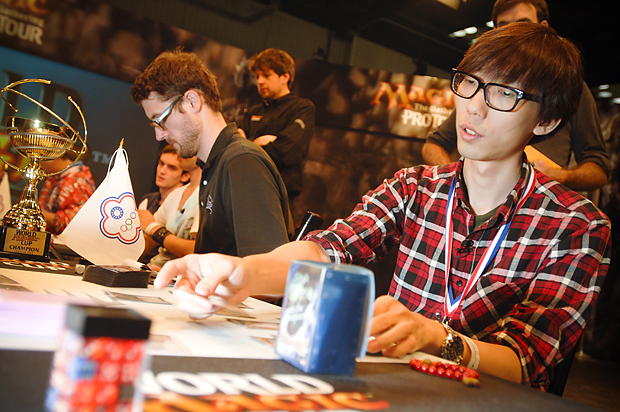 Tzu Ching Kuo controlled the first game of the match, bringing him to victory in Game 1.

After sideboarding, there were a number of cards that Tzu Ching Kuo would have to watch out for from Affinity. Blood Moon can be problematic for control, as can Torpor Orb. Given its weakness to Blood Moon, Kuo was quick to mulligan a hand that could not realistically stop it, and would have few outs to someone casting it. Iramain kept, happy to be on the play and starting with an extra card on his opponent.

Iramain's first turn was Glimmervoid, Signal Pest, and Ornithopter. That team got stuck in the following turn, but did so unequipped, as Iramain's best efforts to resolve an early Cranial Plating were stopped by an Annul.

A second Signal Pest came down for Iramain but was killed off by Dismember. Now it was time for Tzu Ching Kuo to go on the counter-attack. He cast a Geist of Saint Traft and used it to get stuck in, but ultimately found that this left a window for Iramain to resolve a Cranial Plating and equip it.

A Path to Exile on Signal Pest meant the Plating wouldn't trouble Tsu Ching Kuo's life total a great deal, but the Blood Moon that came after combat could prove more of a problem.

Iramain let out a laugh as Kuo quickly played an Island for his turn, ensuring his mana would be fairly good in spite of the enchantment. He was happy to see nothing worse than a Geist of Saint Traft and had a Glavanic Blast ready to stop Restoration Angel from doing too much.

Kuo's hand was stacked but impotent in the face of Blood Moon. Two copies of Kitchen Finks and a Threads of Disloyalty were all useless with just one Plains and one Island. An attack and a Galvanic Blast were enough to square the match at 1–1. 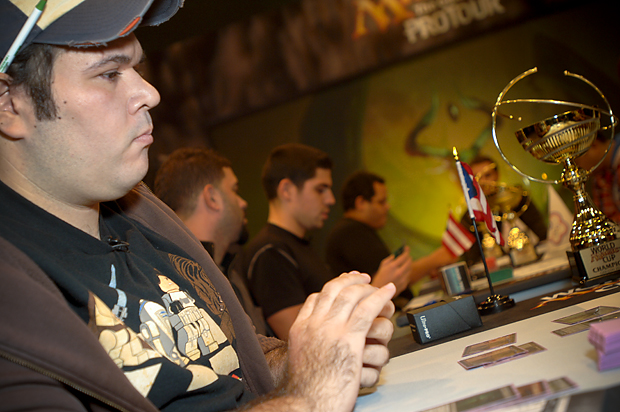 A fast start backed by a Blood Moon helped Jorge Iramain even up his match with a Game 2 victory.

At this point, the match was paused to watch the second game of the Standard match. While Kuo was keen to play out the final game, where his Stony Silence tech was ready and waiting in his hand, he was happy to content himself with a team victory, as his countryman Yu Min Yang sealed his match and the series for Chinese Taipei.