This ride has been amazing and a perfect way for the inaugural World Magic Cup to begin. All weekend long, we've been harping on how important winning and seeding was to success in this tournament. Apparently Puerto Rico wasn't tuning in to the broadcast. Starting from the 8th seed in Top 8, they worked their way through the Quarterfinals and Semifinals methodically, dispatching each opponent despite being disadvantaged by having to play second for each opening game. They are one of the many great underdog stories of the tournament, and have been fan favorites throughout their advancement.

Their opponents in the Finals, Chinese Taipei, understand what it's like to be underdogs. At Worlds 2011 in San Francisco, Chinese Taipei stormed out of nowhere to make it to 4th place in the team competition. After this year's performance, it has become very apparent that they have shed that underdog label and are quite a strong team. Their team captain, Tzu Ching Kuo, is a player who is, for reasons that I can't quite figure out, relatively unknown outside of the APAC region. This despite being an incredibly consistent player with a long history of strong finishes at the pro level. In fact, he has been around long enough and done well enough that he appeared on the Hall of Fame ballot for the first time this last year. Hopefully this strong performance can dispel some of the mystery surrounding him and reinforce the strength of this Chinese Taipei team.

Based on the higher seed, Yang was on the play, but Nieves made the first move, using Gitaxian Probe to get a peek at Yang's hand. Both players scribbled down the cards revealed: two Falkenrath Aristocrats, Go for the Throat, Geralf's Messenger, and a pair of lands. When Yang played a Fume Spitter on the following turn, it was apparent what he had drawn. It would never have a chance to attack, though, as Nieves dropped an Augur of Bolas into play, making a nice wall. The Augur netted him a Ponder, which he cast on the next turn. Yang, meanwhile, dropped his Cavern of Souls into play and made the Geralf's Messenger he had in his hand, dropping Nieves to 18. 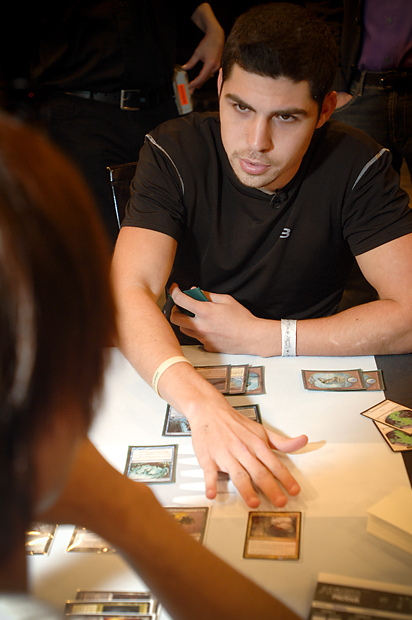 Gabriel Nieves of Puerto Rico started off the match with plenty of information about his opponent's options.

Yang started attacking on his next turn. The 3/2 Messenger sailed right past the Augur, dropping Nieves to 15. When Yang added a second Messenger to his side after combat, he found himself with a reasonable lead on life and a fairly resilient board position. Nieves had no play on his turn, simply adding a Moorland Haunt to his side of the board. He had cast a couple of Thought Scours at this point in the game, so he had a couple of creatures in the graveyard to chump block with. Yang's attack dropped him to 10, and a morbid Brimstone Volley took him down to 5 with a pair of Geralf's Messengers still on the board.

Nieves spent a good portion of his next turn deep in thought. He was in a precarious situation, caught with a low life total against a deck like Zombies, which almost always spells death at some point. He ended up making a Delver of Secrets and passing the turn with four lands up. Yang found a fourth land on his turn, enabling him to start casting his Falkenrath Aristocrats, much to the chagrin of the already unhappy Nieves. In response to the first one, Nieves used Vapor Snag to return both Messengers to Yang's hand. That left him with just the Fume Spitter and his Aristocrats in play once it resolved. When Yang went to attack, Nieves tried to Gut Shot the Aristocrats, forcing Yang to sacrifice his Fume Spitter to make it indestructible, but Nieves responded to that with a second Gut Shot, dropping to 1. Yang's board was cleared, but he had a pair of Messengers in his hand and a Cavern of Souls on Zombie in play. Nieves took a glance at his next card and conceded in the face of the inevitable Zombie massacre.

Between games, the players on the Chinese Taipei team huddled together to discuss the sideboarding changes they would make, referring to an annotated version of the decklists they were provided. After a good deal of talking and a bit of waffling, they trimmed down the Aristocrat count, opting to go for more control with some discard. One other thing they did was study how they expected Nieves to sideboard, making sure to adjust their plan accordingly.

Nieves began the second game with a Gitaxian Probe before making his first land drop. Yang had kept a hand containing Tragic Slip, Geralf's Messenger, Gravecrawler, Fume Spitter, Nihil Spellbomb, and two lands. After seeing Yang's hand, Nieves played a Delver of Secrets, which seemed a bit odd considering the Tragic Slip he knew was in Yang's hand, but a Mental Misstep when Yang tried to give him the Slip explained it all. Nieves then added another Delver of Secrets to his side of the board, attacked with the first (it failed to flip), and passed the turn back. Yang showed one of the cards he had drawn on the following turn, adding a Mortarpod to his side and shooting one of the Delver of Secretss.

Nieves' Delver of Secrets once again failed to flip, which was very problematic considering the Fume Spitter still in Yang's hand. Nieves just attacked for 1 and passed the turn back to Yang, careful to leave two mana available. When Yang tried to play the Spitter on his next turn, Nieves stopped it with Mana Leak. All that Yang could do beyond that was play a Nihil Spellbomb and pass the turn. He still hadn't drawn another land.

Nieves would have loved to press this advantage with a flying attacker, but his Delver of Secrets still refused to transform. He attacked for 1 yet again, dropping Yang to 17, before playing yet another Delver of Secrets. On his turn, Yang activated his Spellbomb and drew a card, which Nieves responded to by making a Spirit with his Moorland Haunt. Yang got there with a third land, allowing him to cast both a Gravecrawler and a second Fume Spitter, this one resolving and reducing Nieves back to one Delver of Secrets.

Nieves had a stroke of luck, finally flipping his Delver of Secrets into an Insectile Aberration. This let him attack over for 4, dropping Yang to 13. Unfortunately for him, Yang had a Brimstone Volley to kill the Aberration after only one attack. Nieves just used his Moorland Haunt to make another Spirit token, but things were going to turn south soon if he didn't get something bigger going. Yang had a Mortarpod and a Gravecrawler, effectively letting him machine gun off the Spirits over a couple of turns if he so chose. When he added a Blood Artist and a second Gravecrawler on his turn, the machine was finally assembled.

Nieves had some fight in him still, sending an air force of three Spirits to drop Yang to 8. After combat, Nieves played an Oblivion Ring, trapping the Mortarpod underneath. Yang fought back, attacking Nieves with his Gravecrawlers and knocking him to 8. A Geralf's Messenger dropped him to 6, but a Celestial Purge prevented it from doing any further damage. With no cards left in hand, Nieves had to leave it all up to fate.

An Augur of Bolas off the top of the deck gave him another spark of life: Celestial Purge. "Oh no," said the entire Chinese Taipei team in unison. "Oh yes," said the Puerto Rican team with big grins on their faces. Nieves attacked, sending his three Spirits to drop Yang to 5. Rather than use the Purge right then, Nieves held it. Yang gave him a great target the next turn with a Geralf's Messenger, but the Messenger dropped him to 4, making the attack lethal and forcing him to Purge the Blood Artist. Nieves dropped to 2. After combat, Yang emptied his hand, playing a Cavern of Souls and using it to cast a Diregraf Ghoul.

As Ulysses Everett McGill would say, Nieves was in a tight spot. The Block Constructed match had already finished, with the win going to Chinese Taipei. The Modern match was paused for the culmination of this game.

Right then, Nieves had to win the game or it was all over for Puerto Rico's miracle run. He sent only a single Spirit to attack, needing to save the rest for blockers. Yang dropped to 4. Nieves passed the turn, virtually daring Yang to do his worst. Yang slowly peeled his top card, looking for something to end the game on the spot, but the Diregraf Ghoul he drew wasn't that. He sent his team, killing all of Nieves's creatures in the ensuing combat, giving him one more body to turn into a Spirit. As filling the board with more creatures, Yang passed the game back to Nieves. On 2 life, Nieves peeked at his top card... and aimed a Gut Shot at Yang, taking his own life and delivering the first World Magic Cup title to Chinese Taipei! 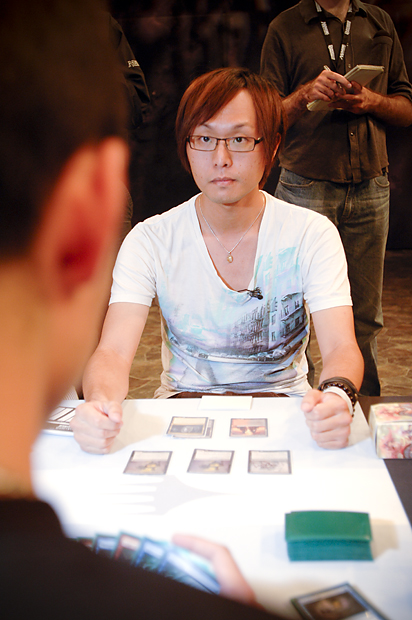 Yu Min Yang pilots his Zombies to a tense victory in Game 2 to clinch the Chinese Taipei victory in the World Magic Cup.