This is what the World Magic Cup is all about. Two teams from opposite ends of the Earth traveling to yet another corner of the planet to meet in a high-profile Top 8 Quarterfinals matchup with money, fame, glory, and—just as importantly—Pro Tour invites on the line.

This represents the highest finish for either the Polish or Filipino national teams at any previous Magic world tournament, and both teams have earned their stripes this weekend.

The Filipino squad is headlined by Gerald Camangon, an occasional pro making his fifth national team appearance. Camangon has been piloting Doran through Modern, helping carry his team into the Top 8. Andrew Cantillana will be behind Delver of Secrets today in Standard while Zax Ozaki, like everyone, is on Jund in Innistrad Block. 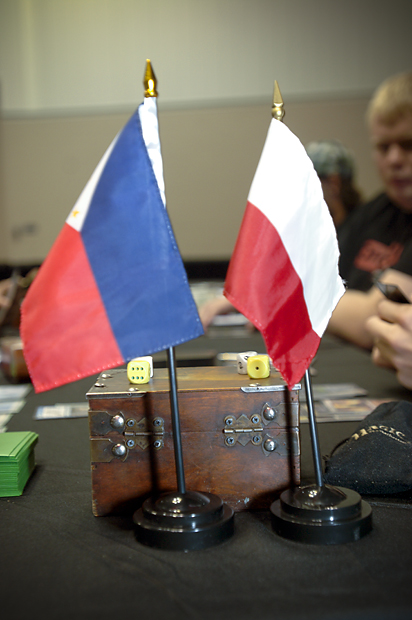 Team Poland and Team Philippines face off in the Quarterfinals of the World Magic Cup, the furthest either team has ever advanced in an international team tournament.

Poland is paced by the immortal Tomek Pedrakowski, who will also be piloting Jund through the day's Block matches. Adam Bubacz will handle Zombies in Standard while Mateusz Kopec—making his second national team appearance—has control of the team's Modern RUG Delver of Secrets deck. The Polish team swept all three rounds of Team Constructed, and they're looking to put up a similarly dominant performance here.

With all of that hullabaloo out of the way, we're going to turn our attention to Modern with updates from the other two matches. By right of their higher seed, the Polish team elected to play first, and both teams high-fived and bumped fists with their teammates, as was their custom.

The Polish team was on the play, putting Kopek's tempo-based RUG Delver of Secrets deck right where he wanted to be.

Where he didn't want to be was on six cards, but that didn't stop him from landing his deck's namesake on turn one and flipping it on turn two with a Mana Leak.

Camangon fired back with his own dangerous one-drop in a Noble Hierarch, which enabled a big second turn. Inquisition of Kozilek revealed Mana Leak, Spell Pierce, Lightning Bolt, and Vendilion Clique, and, with no third land or red mana showing, Camangon stole the Leak and followed up with a Thalia, Guardian of Thraben to stymie Kopek's development early.

All Kopek could do was attack with his Insectile Aberration while Camangon improved his board further with a Knight of the Reliquary and a pair of Tarmogoyfs. Still, Camangon had fallen to just 4 life from the 3/2 flying beater over the course of several turns.

But it wasn't enough. Kopek tried Vendilion Clique to provide a blocker from Camangon's lethal attack force, but the Clique revealed both a Slaughter Pact the Filipino had been sandbagging and a Maelstrom Pulse. Either removal spell was enough to force through the damage to take the first game.

Which one do you take?

Camangon's teammates joined him in winning their first games in short order as well. Ozaki won the Jund mirror in Block thanks in part to a timely Miracled Bonfire of the Damned for four. In Standard, Poland's Bubacz kept a slow Zombie hand with just a Diregraf Ghoul for pressure and paid for it when Sleep put an end to any race he had against Delver of Secrets's Restoration Angels.

And just like that, the Philippines were up a game across the board. 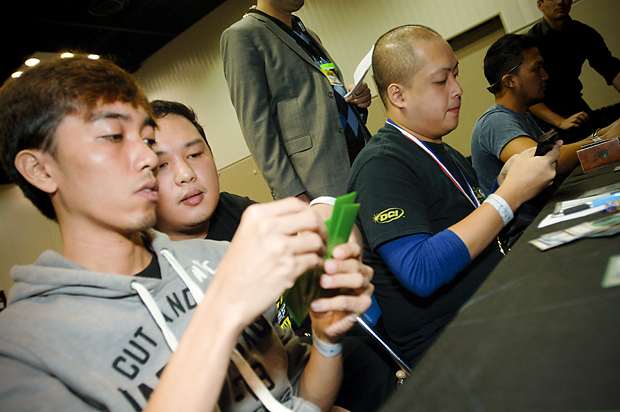 Team Philippines went ahead with an early one-game lead in all three matches.

Camangon mulled to six and found himself staring at an odd hand of two Noble Hierarchs and a pair of Zealous Persecutions, which could be good against a swarm of Delver of Secrets, if it came to that.

However, it wasn't so great against Insectile Aberration, as Kopek flipped it on his second turn again (revealing Cryptic Command), mowing down one of the Hierarchs a with Lightning Bolt and killing the other with Snapcaster Mage plus Bolt for good measure.

Camangon reloaded with a Tarmogoyf, but, like last game, was being hit for a Lightning Bolt's worth of damage every turn thanks to a certain flying blue Insect, all the while drawing nothing but lands to go with his Zealous Persecutions. With no help coming even after cracking a Horizon Canopy, Modern moved on to Game 3...

...but not before the teams huddled around a tense Standard match that nearly decided the round.

You see, while Kopek was dismantling Camango, Pedrakowski had been forced to mulligan to five, and although he made a game of it with two Bonfire of the Damneds—one miracle, one the old fashioned way—he eventually succumbed to his initial disadvantage. That meant one match win would push the Philippines into the Semifinals.

That put additional pressure on the Standard match, where the Philippines was up a game, but facing a ton of early pressure from Bubacz's Zombies. Cantillana managed to stabilized with a Gideon Jura, but was frozen at just 1 life.

So here's the scenario. With Delver of Secrets down to just 1 life and a Restoration Angel, Blade Splicer, and Golem on the table, the Zombies mage played two Phyrexian Metamorphs, playing his own "Angel" tricks, netting two Golems in the process as well and knotting up the board.

But then Cantillana drew Snapcaster Mage off the top, giving him free reign to use a Vapor Snag to clear out the only flying blocker for his Angel to set the Zombies player to 4 life, lethal with another attack and the flashed back Vapor Snag.

Zombies was desperate for a burn spell, but only found Nihil Spellbomb, forcing the Delver of Secrets player to reveal his Snapcaster/Snag plan early. Then at 4 life, recasting the Phyrexian clones would be costly for Bubacz. But he found a way to leverage them anyway.

With the whole of the Polish brain trust at his back, Bubacz used one Phyrexian Metamorph—falling to 1 life—to copy Snapcaster Mage, giving a Doom Blade flashback and killing the Restoration Angel that was threatening lethal damage.

That was when Zombies found a Vampire Nighthawk, a lone flier against Cantillana's oddly ground-bound forces. Now forced to act, Cantillana attacked with two Golems, but was unable to finish. Without a solution to the Nighthawk, that evened the match at one game each.

That meant there were two matches going to decisive Game 3s in what had turned from a potential rout into a very tight match. 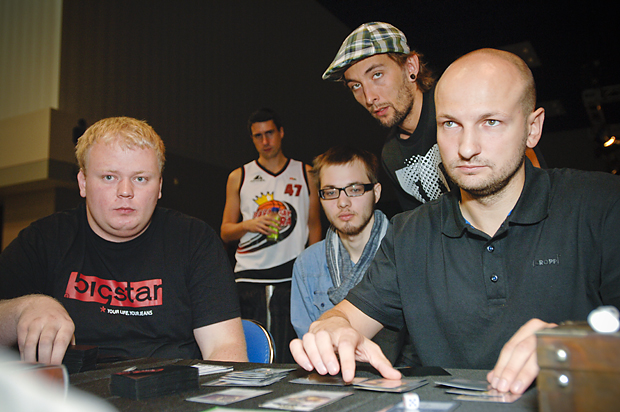 Team Poland battles back to force third games in two of their matches.

Naturally, Kopek drew Delver of Secrets on turn one.

"You know how it is. You don't play Delver of Secrets if you're not going to draw it," Kopek said, shrugging.

The Delver of Secrets could be dangerous if it flipped quickly, as Camangon was already at just 15 life from his often painful mana base. He used a second Inquisition of Kozilek to steal Serum Visions, and watched as the Delver of Secrets failed to flip for the first time.

But not the second.

After using Lightning Bolt to dispatch a Thalia, Guardian of Thraben, Kopek was right back where he wanted to be, with Camangon's side clear and a 3/2 flier attacking with impunity.

But Camangon made a 3/2 of his own in Kitchen Finks, shifting the race slightly close to even after falling to 10 on the next attack. But Kopek kept control with Cryptic Command in Dismiss mode to dispatch a Knight of the Reliquary. A second Knight fell to Mana Leak, and things started looking grim for the Filipinos after jumping out to an early lead. They were behind in Standard as well.

From there, all it took was a Lightning Bolt and another Insectile attack to take the match.

That's when all of the attention turned to Standard. Both teams' tournament lives were now riding on one very close Game 3.

Zombies had once again jumped out to an early lead on the back of a Gravecrawler and a pair of Geralf's Messengers, but some Timely Reinforcements plus a pair of Celestial Purges let Cantillana crawl back in the game.

A Blood Artist and a copy, courtesy of Phyrexian Metamorph, made the math messy, however, and Cantillana was forced to dance carefully around at just 5 life.

Both teams carefully plotted several complicated combat steps. Each player had at least four creatures in play and with life totals at 12–5 in favor of Zombies, there was little room for error. An attack left Cantillana at 4 life, but Divine Offering off the top—targeted at the copy of Blood Artist—gave him a window. Bubacz (truthfully, by now it was the entire Polish team) sacrificed a Fume Spitter to kill his own Blood Artist in order to keep the Filipinos from gaining life (and it was truly the whole Filipino squad plotting every move as well) and to knock the Delver of Secrets squad down to a meager 2 life. 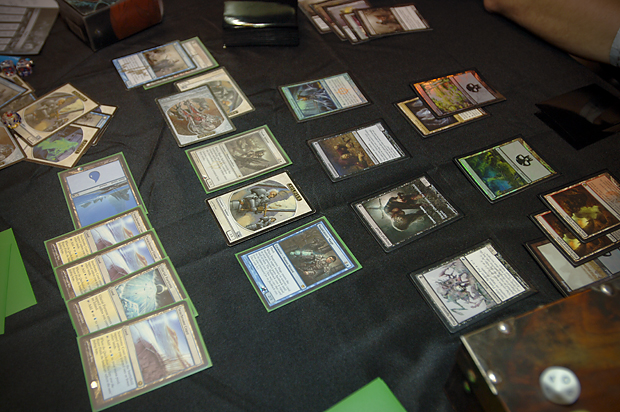 Every single player was involved in every single decision in this complicated deciding match.

Staring at the board, the Filipinos plotted out a careful attack meant to maximize their damage while preserving their life total as best as possible.

So Bubacz slowly peeled his card, but the jig was immediately up as his teammates eyes grew wide and pumped their fists.

Mortarpod was staring back at the team, and all it took was two activations to send Poland into the Semifinals.

"Those games were so close," Kopec said, shaking the Filipinos' hands.

"Yes, everything was close," said Camangon in reply.