Gabriel Nieves with Delver of Secrets vs Stjepan Sučić with Infect

What was possibly the most exciting deck of this entire Top 8 was Croatia's Infect deck, piloted by Stjepan Sučić, which faced off what was the most-played Standard deck of the tournament: Angel Delver of Secrets, piloted by Puerto Rican Gabriel Nieves.

Spirits were high on both sides with the teams joking, posturing, and generally having a good time as they prepared for the Quarterfinals. If the guys were stressed, they weren't letting it show. Both players shuffled up and waited for the round to officially begin. As the begining neared, the nerves began to peek through, if only slightly.

English was only spoken when speaking to opponents as the lingua franca at the table. Spanish and Croatian carried between the members of their respective teams except when a comment was meant to be heard by the opponent. 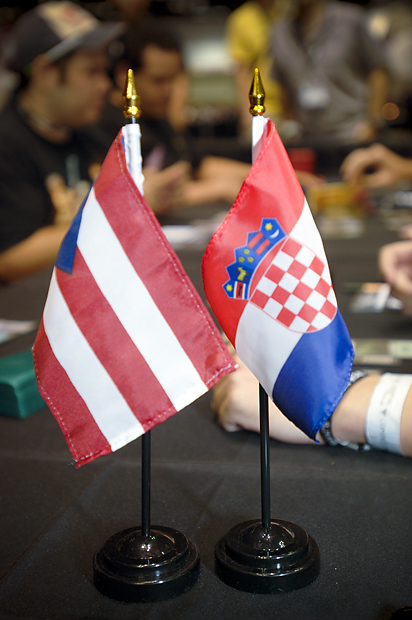 Puerto Rico and Croatia face off in the Quarterfinals of the first ever World Magic Cup.

A quick roll of the dice was snatched back as Croatia realized their seed permitted them to simply make the decision rather than leave it up to a matter of luck. Stjepan kept his initial seven cards while Gabriel considered his own seven and consulted with his team before deciding to keep. A Forest and Glistener Elf came down for Croatia. Gabriel drew, played a Seachrome Coast and a Delver of Secrets before passing.

Stjepan laid a Cathedral of War before attacking with his Elf. Gabriel went to 2 poison. After combat, Stjepan cast a second Glistener Elf. Gabriel peeked during his upkeep, then drew, laying an Island before casting Augur of Bolas. He revealed Thought Scour from his top three before bringing it to his hand.

Stjepan laid another Cathedral before attacking with one of his Glistener Elfs and, dealing 2 damage to himself, he Gut Shotted Gabriel's Delver of Secrets before blockers were declared. Gabriel, threatened to go to 5 poison, considered the block. After Gabriel declared no blockers, Stjepan responded with Titanic Growth on the Glistener Elf, putting Gabriel at a dangerous 9 poison.

Gabriel Pondered at the end of Stjepan's turn, looking at his top three and, without any hesitation, he shuffled them away, hoping the deck might come up big for him. He passed his deck to Stjepan for shuffling, and after Stjepan passed the deck back, Gabriel called the judge for a quick side chat; they spoke quietly in Spanish as Stjepan patiently waited. His teammates played on, with the Modern match of Affinity against RUG Delver of Secrets continuing on and a Block mirror battling at the furthest table.

The core of the discussion surrounded the belief that when Croatia shuffled Gabriel's deck a team member was able to see the cards. After the Spanish judge Adrian Estoup spoke with both players, explaining the concern, the deck was shuffled again, blocked from the view of Stjepan's teammates.

Gabriel drew for the turn, and cast Gitaxian Probe, seeing Wild Defiance and Forest in Stjepan's hand. Gabriel considered his hand and without blockers he conceded due to lack of blockers against either of Stjepan's Glistener Elves. 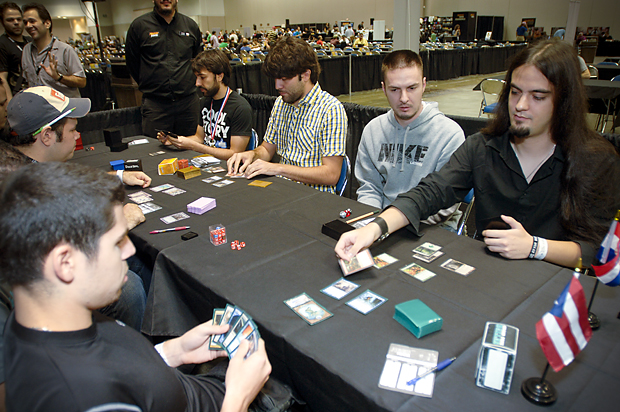 Puerto Rico and Croatia battle through their three matches as their fourth players watch on and offer advice.

Meanwhile, Puerto Rico had already won the first game of Block and it looked to be on the verge of winning Modern as Croatia sat precariously at 3 life, facing down a robotic army from the Affinity deck. The Croatian team, aside from Stjepan, were focused on that match as they tried to salvage the win. Both sides become focused on the match as the Croatian player cast Cryptic Command to tap down the robot army. With life 11–1 in favor of Puerto Rico, the game was at a critical juncture, and after much consideration and careful play it was Puerto Rico who won the first game of that match.

Puerto Rico went up 2–1 in games for the Quarterfinal without a match yet decided. 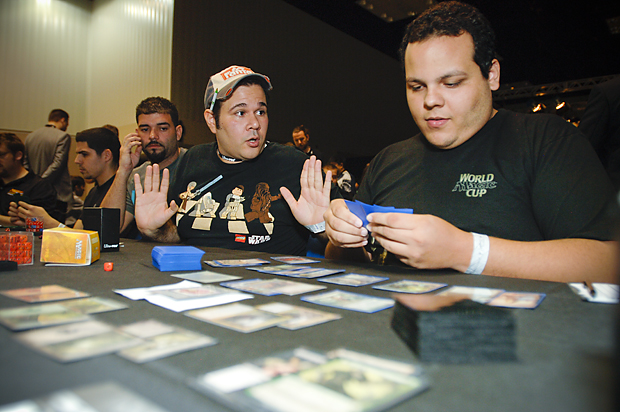 Puerto Rico after the first games of their respective matches.

Gabriel chose to play for Game 2, drawing his seven and quickly mixing them back into his deck to mulligan. Stjepan kept his seven. Gabriel shuffled and drew six, and after a quick check with the team he kept. Going to 18, he cast Gitaxian Probe to see two Forests, Glistener Elf, Inkmoth Nexus, Mutagenic Growth, Wild Defiance, and Apostle's Blessing in Stjepan's hand. Gabriel dutifully noted down the cards, announcing his draw for the Probe. He then Probed again, going to 16 to draw another card. He laid a tapped Glacial Fortress and passed the turn.

Stjepan laid the Nexus and passed back. Gabriel untapped and laid an Island. Stjepan drew, then activated the Nexus and swung for 1 poison. Gabriel drew, laid another Glacial Fortress, tapped his Island and cast a Delver of Secrets. 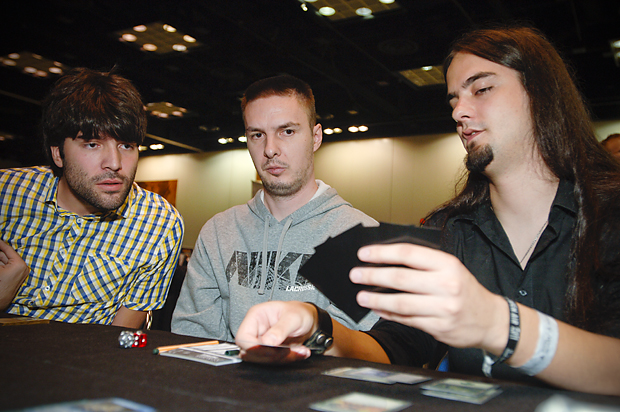 On Stjepan's turn, he laid a second Forest. After some Croatian discussion, Gabriel made a hidden note, reminding himself that he suspected Stjepan to have Mental Misstep in hand—a suspicion that proved false. Stjepan activated his Nexus again and attacked for Gabriel's second poison counter. Stjepan played Glistener Elf, which Gabriel allowed to resolve. At end of turn Gabriel cast Dismember on the Inkmoth Nexus, taking 4 points of damage.

During the Puerto Rican's upkeep, he peeked at the top and saw Divine Offering, considering carefully whether to reveal it for Delver of Secrets. He decided to reveal and flipped his Delver of Secrets. His hand at that point held Divine Offering, Restoration Angel, and two Mana Leaks. He attacked for 3, putting Stjepan at 17. No blocks on the next turn and he went to 3 poison. Stjepan laid his second Inkmoth Nexus to then tap out and cast Wild Defiance, which was met by one of Gabriel's Mana Leaks.

On Gabriel's turn, he untapped and drew a Snapcaster Mage. He attacked with the Insectile Aberration to put Stjepan at 14. Stjepan drew, activated Nexus, and attacked with it and the Elf. Gabriel went to 5 Poison.

Gabriel cast his Divine Offering, targeting the Nexus and drawing out Stjepan's Apostle's Blessing. Gabriel untapped, drew, and laid his fourth land, finally enabling him to cast his Restoration Angel if needed.

Stjepan untapped, drew, and thought over his options. At that moment, the game was interrupted as Puerto Rico won the Modern match in two games and Block was still in their second game. As the Standard game resumed, Stjepan laid one Ichorclaw Myr, which resolved, and then attempted to cast another, which caused much discussion as Gabriel and the team considered what to do. The variables they had to consider: hand sizes, life totals, and poison counts. The second Ichorclaw was met by a Mana Leak. Stjepan passed without an attack.

Gabriel drew, passing without his own attack and a completely untapped board. On Stjepan's turn a Cathedral of War came down for Stjepan, who then declared Ichorclaw Myr as an attacker. Gabriel declared no blocks, taking 2 more points of poison to go to 7. At the end of the turn, Gabriel Snapcastered back his Divine Offering, casting it against the Ichorclaw Myr. Stjepan cast his second Apostle's Blessing to save it. Then Gabriel drew for his turn, bringing his second Restoration Angel to hand. He laid a Seachrome Coast, which entered the battlefield tapped.

Stjepan drew, with Glistener Elf, Ichorclaw Myr, and potentially Inkmoth Nexus ready to declare attacks when the time came. He requested to see Gabriel's graveyard, fanning it for his teammates as they consulted on the game. All four players are involved in the turn before, deciding to indeed activate the Nexus and declare an all-out-attack.

As Stjepan considered what to do, a fist pump came from the Croatian Block player, having won the crucial second game to even that match 1–1.

After the Angel was allowed to resolve without response, blockers were declared: Aberration on Myr, Snapcaster on Elf, and Angel on Nexus. Stjepan's third Apostle's Blessing came down to protect the Myr. Damage resolved, leaving only a weakened Angel and Ichorclaw Myr on the board.

Stjepan attacked with the Ichorclaw Myr, which drew the other Restoration Angel as a blocker from Gabriel's hand. Stjepan cast his fourth Apostle's Blessing before blockers were declared to force the Myr through unblocked, dealing lethal.

With that win, the team's drew even. Croatia won Standard. Puerto Rico won Modern. And their fates balanced on the final game of Innistrad Block, which was tied 1–1 in the mirror. The game played with Puerto Rico drawing an incremental lead over the first half-dozen turns. Double Garruk Relentless from Croatia seemed to bring the players back nearly to even until Puerto Rico found Evolving Wilds, which allowed them to find the long-awaited second Mountain that would enable the casting of a game winning, non-miracle, Bonfire of the Damned.

With that play, and a cry going up from the players, Puerto Rico's Cinderella story really began, with the 8th seed knocking out the 1st seed to advance to the Semifinals, where they would face a very powerful Poland. 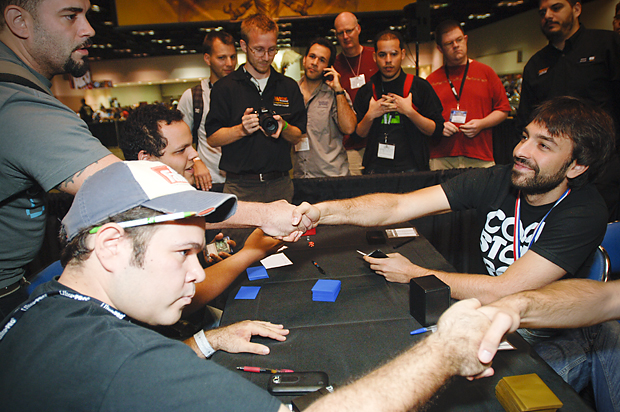 The Croatians and Puerto Ricans shake hands, with Puerto Rico advancing to the Top 4 of the World Magic Cup.