Out of the eight players involved with this Semifinals match, only one was qualified for Pro Tour Return to Ravnica before winning in the last round. Puerto Rico, who had triumphed over a stacked Croatian team, was already living the dream, and the players had no intention of letting it end any time soon. With Affinity in Modern and Jund in Block Constructed, Puerto Rico was squaring off against Team Poland, who had RUG control for Modern, black-red Zombies in Standard, and Jund in block. 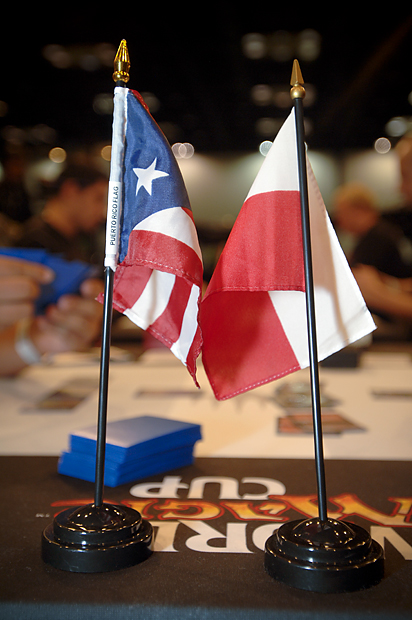 Puerto Rico and Poland face in the first Semifinals matchup of the first-ever World Magic Cup.

In the Standard match, Adam Bubar of Poland was stuck with a double mulligan—not the start he might have hoped for. Gabriel Nieves of Puerto Rico, meanwhile, had a hugely explosive beginning with the Affinity deck. Inkmoth Nexus, Mox Opal, and Springleaf Drum on turn one, then Signal Pest and Steel Overseer on turn two, up against a lone Delver of Secrets. While that Delver of Secrets did flip, the Puerto Ricans were still well ahead on the board. 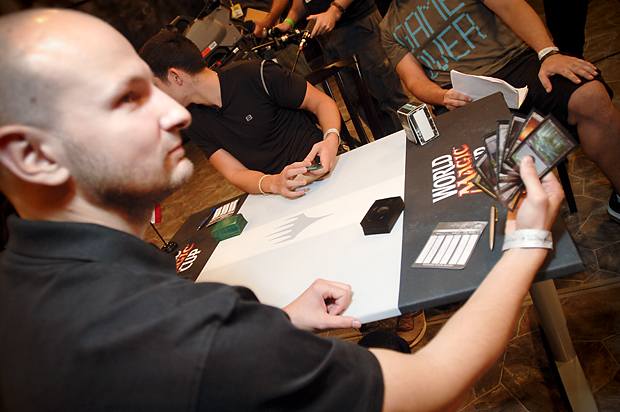 Poland's five-card hand for Standard did contain Gravecrawler, meaning that getting in some early damage was possible, though even this was hampered by an Augur of Bolas. Falkenrath Aristocrat, Phyrexian Metamorph, Doom Blade, and Tragic Slip were revealed by a Gitaxian Probe, at which point the turn was shipped back.

That Doom Blade killed off Augur of Bolas, but the 1/3 was soon replaced. This one died to Tragic Slip when it blocked Gravecrawler. Puerto Rico was content with this. The early game had not been too painful, and there had been plenty of hand-sculpting with Ponder. While Delver of Secrets decks can have aggressive draws, against decks like Zombies there is definitely room for them to play the control role.

A Delver of Secrets from Puerto Rico stuck, and was soon set up by Ponder to flip. In the meantime, Gravecrawler was getting in for 2 points per turn and Poland was gradually accumulating lands to potentially get its real game started.

Falkenrath Aristocrat was swiftly countered by Mana Leak. Puerto Rico then shifted gears with a Runechanter's Pike to turn Delver of Secrets into a 7/1 beatdown machine. The race was on. A Restoration Angel from Puerto Rico was enough extra power on the board that Poland was suddenly on a very short clock. Even a Phyrexian Metamorph on the Angel wasn't enough, and Puerto Rico used Vapor Snag to lock up Game 1.

Just moments later, Puerto Rico earned the sweep in Game 1s with a Bonfire of the Damned for 7 off the top coming from Cesar Soto, to take the lead in the Block Constructed match as well. It didn't seem that being the lower seed held any fear for Puerto Rico, winning in spite of being on the draw. 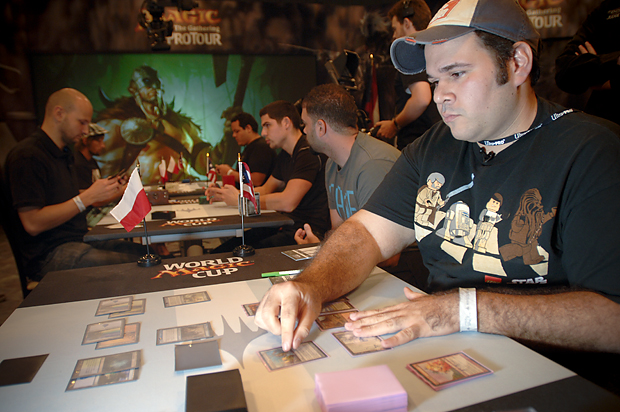 Puerto Rico sweeps the first games of all three matches in their Semifinals against Poland.

In Modern, it looked like Jorge Iramain of Puerto Rico was going to get ahead of Mateusz Kopec in short order. While Kopec had access to Ancient Grudge after sideboarding, a very aggressive draw from the Puerto Rican would force the Pole to draw his answers fast.

Vault Skirge was the initial attacker from Affinity, and there was a Galvanic Blast on Vendilion Clique to keep its path clear. That Clique saw Whipflare, Mountain, and Shrapnel Blast, giving Kopec pause. The Whipflare went away, and Kopec attempted to race with a Huntmaster of the Fells, signaling quite why he was so keen to cull Iramain's sweeper.

A Cranial Plating on Vault Skirge looked capable of ending things very fast, but Kopec still had outs. A Bonfire of the Damned cleared Iramain's side of the board and allowed a glimmer of hope for the Pole, who was already on just 11 life.

An Inkmoth Nexus from Iramain gave him a different avenue of attack, but as quickly as this appeared, Kopec found an answer in Vedalken Shackles. The Pole had a lot of attacking to do to square things up, but he was not about to lie down.

Ancient Grudge flipping Delver of Secrets spelt bad news for Iramain. A 5/6 Tarmogoyf made it even worse. Iramain cast a second Cranial Plating into this imminent threat, and sat back without blockers, sinking to just 5 life. It only took one more draw step for the match to go on to a Game 3. Kopec had shown Poland had the tools to win in this matchup—the big question was, had they left it too late to start doing so?

As if spurred on by this success, Poland squared up the Block Constructed match as well, aided by a Witchbane Orb to serve as protection in the Jund Mirror. They knew they could ill afford to drop more games, and good play and good sideboarding had nearly leveled the series for Poland.

The Standard match saw two mulligans in Game 2, as it did in the first, although one of these came from each side of the table. Once again, Augur of Bolas matched favorably against Zombies, this time as a blocker for Diregraf Ghoul. This time though, the Polish team had some follow-up in a more persistent Zombie horde, relentless in its occupation of the red zone.

It took a little time, but Poland got the match back on track as Zombies punched back through a spotty defense to make the match 1–1 in all formats. 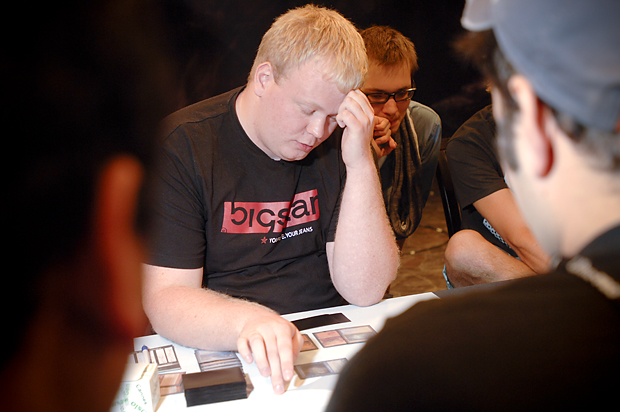 Down but not out, Poland struggles back to even-up the series across all formats.

Kopec was on a mulligan to just five cards in Modern, but seemed fairly satisfied with them. He was staring down the barrel of a loaded gun in Affinity, though, looking at turn-one Memnite and Mox Opal, followed by turn-two Arcbound Ravager.

Kopec cracked a fetchland for Stomping Ground, but was never in a spot to use both the colors it could produce, as a turn-three Blood Moon came down to stymie the Pole's mana. Kopec did have an Island to fetch in response, meaning he would be cut off just one color of mana, but with threats on the other side of the board, Kopec didn't have much time to spare.

Ancient Grudge killed off Arcbound Ravager, but there was soon one to replace it. Kopec didn't have access to green mana to cast the flashback on Ancient Grudge, but found a way to flash it back anyway thanks to Snapcaster Mage. The Mage died to Galvanic Blast, but it had still done good work for the Pole, who was in a rough spot.

Kopec had a Delver of Secrets, but was a little behind the pace in the game. He had a Bonfire of the Damned to kill off Vault Skirge, but couldn't cast it for enough to kill a then-3/3 Memnite (which had grown thanks to Arcbound Ravager).

A Cranial Plating was stopped by Spell Snare, but even basic 3/3 beats were working just fine. Soon, Kopec was at just 4 life to his opponent's 18. Another Ancient Grudge came to keep Kopec alive, and the Pole continued to rumble in with a Delver of Secrets that seemed adamant in not transforming.

At that point, Cesar Soto defeated Tomasz Pedrakowski in the Block Constructed match. Suddenly the stakes were a great deal higher. If Kopec couldn't find a way out of the spot he was in, team Poland would be done for the tournament. 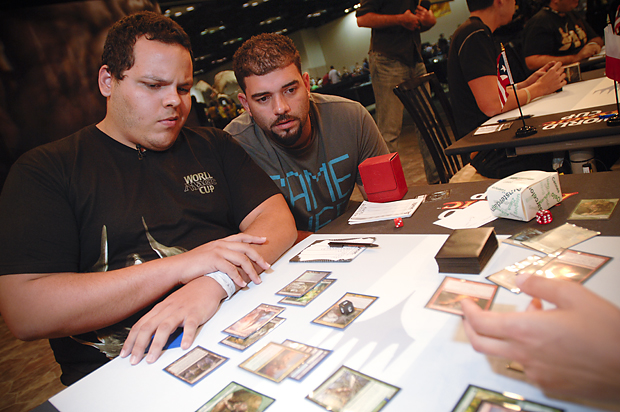 Another Snapcaster Mage meant another Ancient Grudge, and Vault Skirge was down for Puerto Rico. The next threat, an Etched Champion, would be harder to kill. Kopec was in a race and had to deal 13 points of damage before Puerto Rico could find just one more attack step.

A Lightning Bolt was 3 damage, but there was not enough there to close things out.

"I think if you hadn't played Blood Moon, you might have won even faster" remarked Kopec ruefully.

The result of the match and the series was not in debate though. Kopec smiled and extended his hand to an ecstatic Puerto Rican team, who had secured their place in the World Magic Cup finals!