On paper, Chinese Taipei versus Hungary looked like a slate of mirrors across the board. Zombies in Standard, Jund in Block, and Blue-White decks in Modern. 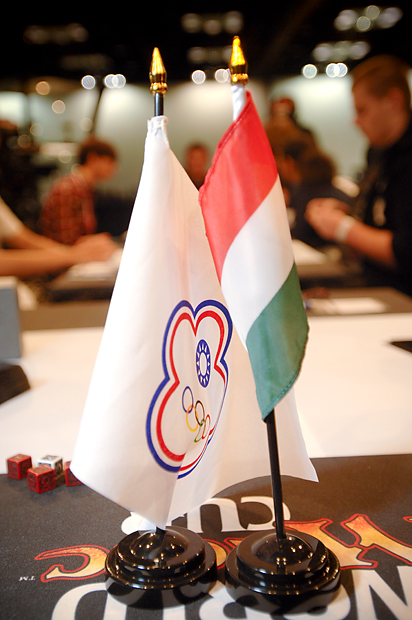 Chinese Taipei and Hungary face off in the World Magic Cup Semifinals.

A closer examination reveals that each team has its own tweaks on the decks. The Hungarian Standard player, Tamas Glied, has adopted Zombie Pod, while his teammate Gabor Kocsis has adopted an aggressive White-Blue Delver of Secrets deck in Modern that dipped into red for Lightning Bolt and Lightning Helix.

Jund, though, was still Jund.

So we followed the Modern match, which had the added bonus of letting us take a look at Tzu-Ching Kuo, who appears on the cusp of Pro Tour stardom, having gone 7–0 on Day One and has more than 150 Pro Points to his name, most recently adding to his total with a 10th-place finish at Pro Tour Avacyn Restored in Barcelona. He also had blue and white mana in his deck, but stuck with just those colors to leverage counterspells with flash creatures and the power of Tectonic Edge. 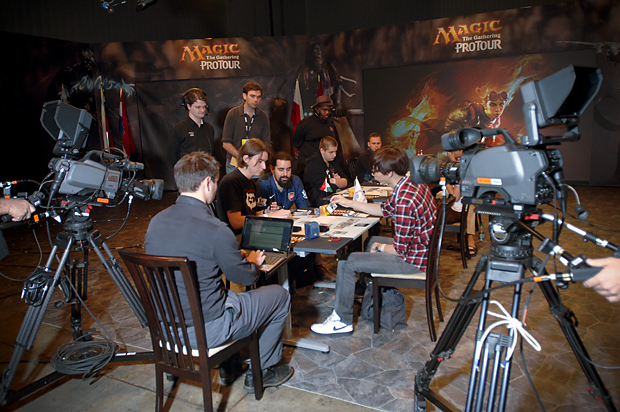 Team Hungary and Team Chinese Taipei begin their matches on the main stage.

A tapped Hallowed Fountain from Kuo met an untapped Sacred Foundry from Kocsis, showing the difference in their deck styles right off the bat. Kocsis used his to make a first-turn Steppe Lynx, which was sent on a Path to Exile on its very first attack. The Hungarian reloaded after combat with a Delver of Secrets, flipping it immediately when he revealed a Remand.

That gave Kuo pause, holding Kocsis in his draw step. Knowing Remand was coming, Kuo flashed in Snapcaster Mage and used it to send the newly flipped Insectile Aberration on a Path to Exile. Kocsis declined to search for land, though, instead choosing to keep the Remand right where it was before casting just a Serum Visions to dig.

Kuo simply attacked and passed, repeating the same move the next turn before Kocsis attempted a Lightning Helix on the Mage. Kuo flashed in a Restoration Angel to save it, using Spell Snare to protect the winged one from Remand.

But the 3/4 lasted just one turn, as Path to Exile removed the flashy flier before Kuo could untap to protect it. Kocsis even had Snapcaster Mage to rebuy the Lightning Helix, killing Kuo's Snapcaster Mage and clearing his board of any nonland permanents.

He did still have a Mutavault, however, which he cleared the way for with Path to Exile on Kocsis's Snapcaster Mage.

Both players found three-drops soon thereafter: a Kitchen Finks on the Chinese Taipei side of the board and a Geist of Saint Traft for Kocsis. While the three-drops stared each other down, Kocsis played and resolved a Delver of Secrets while Kuo beat down with a Mutavault.

Delver of Secrets didn't flip, but the free peek let Hungary shuffle away a dead draw with Arid Mesa.

Despite his confidence, Kocsis simply played another fetchland and passed before taking an attack for 5 from both a Mutavault and Kitchen Finks. Kuo had clearly decided the time to race was now.

The Delver of Secrets failed to flip for another turn, relegating it to chump-blocking duty as Kocsis fell to 1 life. He attempted to stay alive with a Lightning Helix on the attacking Mutavault, but Kuo used a Snapcaster Mage to Spell Snare the Helix.

Kocsis, however, was holding another Remand. And when Remand hits a spell being flashed back, like the Spell Snare, that spell gets exiled.

So Kuo, still fighting to win this turn, Remanded the Remand, which, predictably, came back out targeting Spell Snare once more.

But then Kuo revealed his master plan: After tapping Kocsis low, Path to Exile simply removed the Mutavault, negating any life Kocsis might have gained and giving him Game 1.

While that game had taken a while, the other matches were well under way, with Chinese Taipei coming out strong. Yu Min Yang had won his Standard Zombies near-mirror, while Tung-Yi Cheng had won the first Block match. However, in a quick second set, Hungary had roared back in Block to even up the Jund match at a game each. 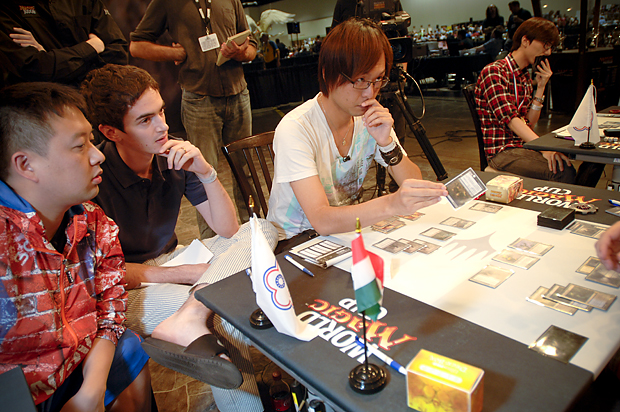 Team Chinese Taipei rushed to early first wins across the board.

Both players kept their initial hands, although Kuo's was land light and somewhat suspect. He would be relying on just a Scalding Tarn and Tectonic Edge to start, which he knew was tricky ground, given Dismember as his only early removal.

Meanwhile, Kocsis put the pressure on early with a pair of Steppe Lynxes. Kuo Dismembered one, which led Kocsis to try and ramp with a Path to Exile on his own Lynx. In turn, Kuo, Spell Pierced the Path to Exile in order to keep Kocsis—who had missed his third land—from finding his way out of his own mana screw.

Kocsis missed a land on the next turn, making Steppe Lynx entirely unreliable. When Kocsis tried a Lightning Bolt to attempt to burn his way out of mana screw, Kuo responded with Remand, one of a number of counterspells in his hand.

The Remand helped him find a second Island, which he used to Spell Pierce the second attempt at Lightning Bolt.

Meanwhile, Kocsis was still missing land drop after land drop, even if Kuo couldn't capitalize on it with any real pressure. What he did have was counters in spades, using a Spell Snare to stop Lightning Helix from resolving.

And for those of you following along at home, life totals stood at 16–9 in favor of the Hungarian player. 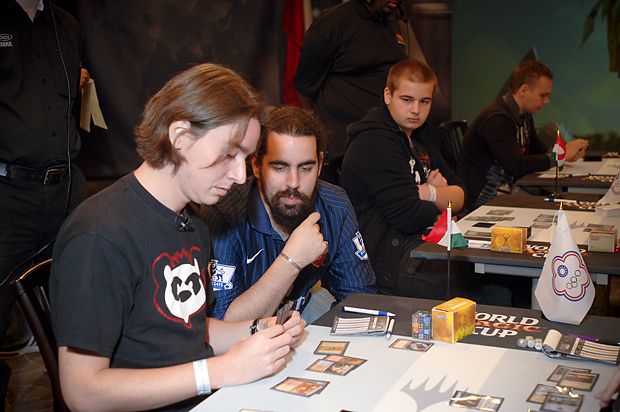 Team Hungary considers its options in its Semifinal matches.

Kuo, looking to end the Semifinals in a hurry—his teammate had just finished winning the Standard match, meaning a win here would put Chinese Taipei in the Finals—played a Snapcaster Mage without flashing anything back, just to get some pressure.

Another draw step, another nonland card. Serum Visions did offer the promise of some help, but it was a false promise, as a second Snapcaster Mage flashed back Remand to continue to stymie Kocsis's development. A second Steppe Lynx was ineffective for the time being, but with Kuo now at 8 from a fetchland, any fetchland from Kocsis could prove lethal if Kuo wasn't careful.

Kuo clearly wasn't concerned, attacking for 6 with both Snapcaster Mages and a Mutavault, evening life totals at 8 each.

His plan became apparent when he flashed in Vendilion Clique in Kocsis's draw step to try and take him home. Kocsis attempted a Remand, but Kuo was still flush with a Spell Snare.

It was a good thing too. Kocsis had drawn a Steam Vents to go with the Lightning Bolt in his hand. Bolt would change all the math... but then again, so would playing Steam Vents untapped.

Kuo chose the Lightning Bolt, sending it to the bottom and practically sealing up the win.

Kocsis gamely played on, though, playing the Steam Vents tapped and attacking with a single Steppe Lynx.

That, however, opened the door for Kuo to play Dismember, removing Kocsis's only blocker and freeing up a lethal attack.

And with that, Chinese Taipei advanced to the finals of the World Magic Cup! 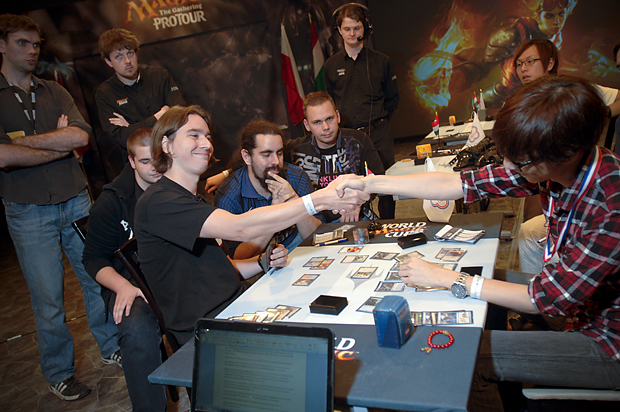