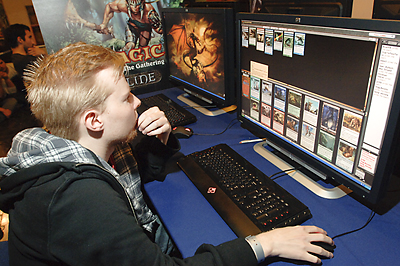 Day One frontrunner Anssi Myllymäki (Anathik)Another evening brought another grueling portion of the third of three competitions here at Worlds: the Zendikar Limited portion of the Magic Online Championships. Since all of the players in this event also qualified for the paper portion of the Worlds individual competition, these three rounds on Magic Online followed six from the normal day of play. Shouta Yasooka (yaya3) pulled neck and neck with previous day’s frontrunner Anssi Myllymäki (Anathik) by running the draft table 3-0. Watanabe’s green-red-blue deck sported a number of powerful landfall cards and allies.

Unlike Classic, most competitors had practiced a large amount of Zendikar Draft online. When you play as much online as these eight do, it’s hard not to have practice with what is being hailed as one of the most popular draft formats ever.

“I want to be black-based,” said competitor Robert Jurkovic (jurda). A respected Pro Player in his own right, he is currently an impressive 3rd overall in the individual competition at Worlds. “But I just couldn’t find a way into it.” It’s clear that Jurkovic is well versed in the current Limited format of choice, with his 5-1 record in the main event.

Speaking of black-based, Stefan Steiner (tomy_vercety) went 2-1 with a monoblack deck sporting a huge number of crocodiles and vampires, including signature powerhouse Malakir Bloodwitch. “Yeah, I hadn’t prepared for Classic really,” he said, explaining his 0-3 performance yesterday. “I play about eight hours a day online, since I started playing about a year ago.”

Ivan Kulbich (a.k.a. Ivan_Kulbich_aka_Striped) went 1-2 in the draft with the other black deck of the pod ... but unfortunately, his three Crypt Rippers were fairly reduced in power by his red splash for removal. “I spend a few hours a day playing, after work,” Kulbich said, reflecting a common mode of play for Magic Online for many casual players. “It’s so convenient, I got back into Magic because of the convenience.” Kulbich was unable to spend more time preparing then his normal amount, but he definitely was enjoying the invite to Worlds and the additional play it afforded him among some of Magic Online‘s best. 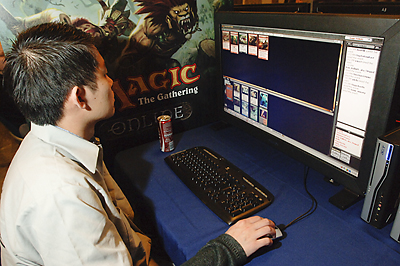 Justin Cheung (Orgg Ascetic)Finally, eighth competitor and level 4 Australian mage Justin Cheung (Orgg Ascetic) found himself not being able to take a match with his mono-red draft deck. He was all smiles, however, pointing out, “I played on Magic Online, mostly Magic Online anyway, so the MOCS and qualifying was just a bonus!” Cheung didn’t find out the Magic Online Championship was multiple formats until very late in the game, and since he was already testing for the three individual competition formats for the main Worlds event, he found himself not being able to spend significantly more time preparing. “I’m hoping to improve on my Worlds Standard performance here in the Magic Online competition,” he said.

You can find the full draft viewer for the Zendikar draft at the Magic Online Championships here:

The updated standings after Round 6 and two formats:

And finally, here were the competitors' deck lists:

1 Shepherd of the Lost 2 Caravan Hurda