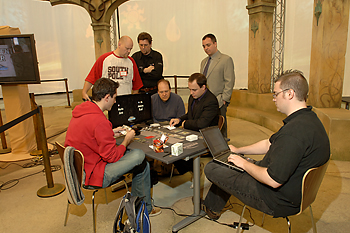 Player of the Year contender Martin Juza and newly minted Hall of Famer Antoine Ruel face off in Round 1.Year in and year out, the World Championships produce the best fodder for the best feature matches, and 2009 is no exception. Antoine Ruel entered the first round of competition burdened by the weight of his brand spanking new Hall of Fame ring. The French super pro was just minutes removed from his inauguration into the Hall, where he joined his brother Olivier, a member of the 2008 class. Across the table from him sat Czech Republic combatant Martin Juza, himself in the hunt for the 2009 Player of the Year race. He was right on the heels of Japan’s Yuuya Watanabe, and a win to start the weekend would start things off right for him.

“Ollie told me to kick you in the face with my ring if you are winning and complaining,” Antoine Ruel informed his opponent as the two sat down to their match.

“He’s so nice!” Martin replied with a laugh, and a big grin spread across his face.

The two players flipped a coin to determine who went first.

“Wait, is that heads?” Ruel asked as the numbered side of a Euro coin flopped onto the table.

“I don’t know,” replied his opponent. “Which side is supposed to be heads?” They turned to Randy Buehler, who was watching the match, but he just shrugged and claimed ignorance with a smile. The two ribbed each other back and forth about which side was heads, then simply re-flipped and started over. Juza won and kicked things off on the play.

Noble Hierarch entered the battlefield on the first turn for Antoine Ruel, but his Knight of the Reliquary was destroyed by his opponent’s Path to Exile. Juza got a two-drop to stick in the form of a Lotus Cobra, but the Snake quickly found itself staring down an Emeria Angel from Ruel, alongside two Bird tokens thanks to a Marsh Flats. Martin didn’t seem impressed, and took advantage of the fact that his Lotus Cobra was still alive on the table. He generated three extra mana from his Snake then cast Elspeth, Knight-Errant and Maelstrom Pulse on his opponent’s Angel all in the same turn.

Ruel replied by casting Ajani Goldmane and Honor of the Pure, gave his team a pump from the planeswalker, and crashed them in to his opponent’s Elspeth. Juza was able to jump his Soldier token with Elspeth’s ability on his own turn and bashed into Ruel’s Ajani, killing the powerful planeswalker when Ruel opted not to block. From there Antoine simply continued crashing in to Juza’s planeswalker, wiping Elspeth out. Juza was under the gun, mustering a Knight of the Reliquary to try to block, but was forced to trade it in combat. He found a Baneslayer Angel, but Ruel simply answered with one of his own and a Rhox War Monk. The game was quickly slipping away from the Czech player.

Trying to make up some ground, Martin cast Garruk Wildspeaker and Behemoth Sledge in one turn, but at 6 life he was forced to pass. That left his board as a Baneslayer Angel, Lotus Cobra, Noble Hierarch, Garruk, and the Sledge. Meanwhile Antoine Ruel had a Baneslayer Angel of his own, Rhox War Monk, Knight of the Reliquary with two lands in the graveyard, two Bird tokens with +1/+1 counters, Noble Hierarch, and Honor of the Pure. He also had a whopping 18 life.

The Frenchman sent his team sideways, minus his Hierarch. “Do I die no matter how I block?” Juza asked, but got a noncommittal shrug from his opponent. By the end of combat, Juza had lost his Baneslayer Angel and Lotus Cobra while falling to 1; his opponent’s board was left almost unchanged. When he drew his card for the turn and found no miracle waiting, Martin conceded. 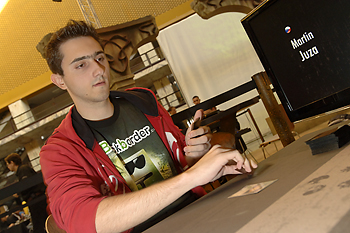 A helpfully labeled Martin Juza.It was off to frowntown for Martin Juza as he kicked off the second game with a mulligan, but the two got underway after that. Antoine led the battlefield presence with a Birds of Paradise that accelerated him nicely into Emeria Angel and two Birds in the same turn, thanks to a Marsh Flats again. Juza, meanwhile, had managed only four lands and a Borderland Ranger, but his paltry presence on the battlefield was simply a ruse. He was sandbagging a Day of Judgment, and pulled the trigger on it to wipe the field clear of creatures.

The Hall of Famer untapped and cast a second Emeria Angel, then played and sacrificed Verdant Catacombs to net himself two more Birds.

Twin Knight of the Reliquaries were how Martin decided to answer his opponent’s Angel, but Antoine showed why he’s a Hall of Famer on his next turn. He cast Noble Hierarch, then played a land to get another Bird (his third). Tapping out, he cast Ajani Goldmane and immediately gave each of his creatures a +1/+1 counter, then attacked to drop Martin to 8. Juza was not pleased, but stayed calm and collected in trying to figure out a solution to his problems.

He tapped out, then activated each of his Knight of the Reliquaries to fetch Marsh Flats. Those he used to find Plains, then cast Martial Coup for 6. That was the type of play he needed, and Ruel was finally out of gas. He cast Rhox War Monk, put a counter on it with Ajani, and passed. Juza attacked into Ajani to kill the planeswalker, then cast Baneslayer Angel. Antoine had Steward of Valeron off the top, but he desperately needed an answer to the mythic rare flyer.

Juza put an exclamation point on that statement by drawing and casting Behemoth Sledge, handing it to his Angel and rumbling the creature through the air to whomp Ruel for 7. Antoine attacked with Rhox War Monk, trading it for most of his opponent’s Soldier tokens and gaining himself some life, then cast a Baneslayer of his own, though she was outclassed by the Sledged Angel across the table.

Path to Exile from Juza was enough to answer the 5/5, and Martin switched his Sledge to his sole remaining Snake token to attack with his team. He was two attack steps away from sending Ruel packing, and when the French player drew back-to-back lands, they were on to the third game. 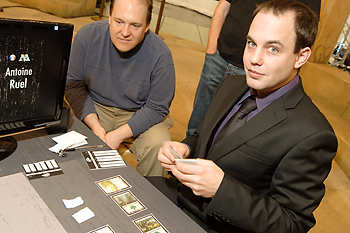 Antoine Ruel smiles while fellow Hall of Famer Randy Buehler watches.For the second time in the match, Martin Juza had to mulligan while Antoine Ruel was content with keeping seven. Content with six, Martin led on Noble Hierarch. That accelerated the Player of the Year contender into a Borderland Ranger, which he used to search up a Plains. Ruel finally got onto the table on this third turn, casting a Rhox War Monk.

Trying to build on his early start, Marin Juza cast Elspeth, Knight-Errant and immediately created a Soldier token. When his opponent attacked the planeswalker with Rhox War Monk, Martin was all too happy to block with the lowly 1/1, simply generating an additional one the following turn. Ruel repeated the play, but had managed to add Steward of Valeron, then World Queller to his team. The 4/4 could answer Elspeth before Juza could get her ultimate off, and when he tried to Maelstrom Pulse the creature, the Czech player was shocked to see Brave the Elements protect it.

On Ruel’s upkeep, Elspeth hit the bin, and all of a sudden Martin’s board position wasn’t so great. His opponent attacked with his team, and after combat Juza was at 17 with a board of just Noble Hierarch, while Antoine had Steward of Valeron, World Queller, and Rhox War Monk. Martin had accrued five lands and, with his Hierarch, was on the verge of a massive Martial Coup. To head that play off, Ruel cast Path to Exile on his opponent’s upkeep to take care of the Hierarch, setting Juza back by a mana source.

In order to keep building to the Coup he held in his hand, Juza was forced to blow a Maelstrom Pulse on his opponent’s Queller lest Ruel start forcing both players to sacrifice a land during his upkeep. Antoine attacked Juza all the way to 10, and watched as Martin decided not to go for Coup but instead to cast Knight of the Reliquary (a 5/5) and Elspeth, making a Soldier token.

Ruel untapped and made some Soldiers of his own, casting Captain of the Watch, but Juza fired right back with Emeria Angel and a second token from Elspeth. Antoine was in the awkward position of needing to attack into his opponent’s board, whether it was favorable to do so or not, or risk seeing Elspeth’s ultimate ability resolve and losing to it. At six loyalty counters, she was creeping closer and closer to going large.

Ruel cast two Knight of the Reliquary but opted not to attack. That opened up Juza to using his own copy of the card to find Verdant Catacombs, then cashing that land in for Forest. The play allowed him to net two Birds with his Emeria Angel, but he wasn’t quite ready to attack, instead passing the turn after incrementing his Elspeth by 1 for yet another Soldier.

The clock was beginning to become a factor as Antoine Ruel cast Emeria Angel, one turn before his opponent’s planeswalker reached eight loyalty counters. With two Knight of the Reliquary active, the French player could make as many as four Birds during his opponent’s turn, some of which he hoped might make it through to knock Elspeth back down to a more reasonable size. Juza put a wrench in those plans with a Baneslayer Angel, but Ruel followed through, finding Misty Rainforest and Verdant Catacombs, which each turned into Forests.

With the turn back, Antoine went deep into the tank to figure out his combat step, eventually opting to simply send his team sideways with a shrug. In the background, head judge Sheldon Menery called time in the round. Ruel had his entire team directed at Elspeth, and Juza tried to figure out how he was going to block. He wasn’t at risk of taking lethal, but he no doubt wanted to maximize the amount of his opponent’s creatures he could wipe from the table.

After a considerable amount of time determining blocks, Elspeth lost 3 loyalty counters. Martin attacked his opponent back for a whopping 21 damage, but because of lifelink, Ruel was still at a healthy 11. Postcombat Juza finally cast his Martial Coup for five tokens, then passed to Antoine. He drew for the turn, cast Noble Hierarch and passed. Juza gave one of his tokens +3/+3 and flying with his planeswalker, then attacked his opponent to 4 and passed.

Antoine untapped for his final turn, but found no help and had to pass back into an overwhelming board position. He thought better than to attempt to bluff his opponent as though he had something, opting to concede rather than drag it out.

2 Captain of the Watch
51 Cards