Coming into Round 11, Terry Soh of Malaysia found himself up against the top ranked competitor from Italy in the competition right now – Patrizio Golia. As neither player had a die, Terry laid two cards face down in front of his opponent, asking him to choose the one with the higher cost in order to determine who would be on the play. 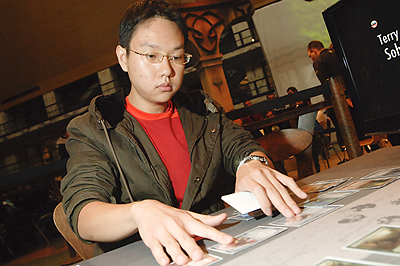 Terry Soh tries to spoil things for host nation Italy.Terry led off with a Kraken Hatchling, while Golia had a turn two Nissa’s Chosen. Golia followed up with a River Boa, which would not be troubled by Kraken Hatchling one bit due to a number of Islands on Soh’s side of the board. Soh cast a Goblin Ruinblaster and passed. While many players are not huge fans of green in Zendikar draft, it seemed that Golia was mono-green. A Grazing Gladehart plus land pushed up his life total, which Soh could not easily attack. What Terry did have was a Paralyzing Grasp for River Boa, and a Burst Lightning for the Gladehart.

Golia wasn’t about to let his Boa go away too soon though and a kicked Mold Shambler tried to remove the Paralyzing Grasp. Soh responded with a kicked Into the Roil to return his enchantment. He untapped and made the most of the fact that Golia had tapped out for his Mold Shambler to kick a Torch Slinger on the Boa while regeneration mana wasn’t available.

Soh was now in the driver’s seat and tapped seven for a kicked Sphinx of Lost Truths to draw three cards. Golia had a Territorial Baloth, but was now hugely behind on card advantage to Terry and looked in rough shape when the former Invitational winner cast both a Reckless Scholar and a Windrider Eel. For his turn, Golia attacked with Territorial Baloth which was chump-blocked by Torch Slinger. Soh’s attacks were more impressive. After using his Reckless Scholar, Terry played a land and cast a Hellkite Charger making for a hefty air attack.

Golia tried going all-out on the attack, but Soh “still had all these” blockers: Kraken Hatchling and Goblin Ruinblaster. Only one creature was going to get through, and that wasn’t enough to finish off Soh, whose Dragon did the deed the very next turn.

Game 2 again saw a Nissa’s Chosen start from Golia, while Soh looked to take to the air with Welkin Tern. River Boa was again next for Golia, who was careful to keep up regeneration mana.

Soh cast a Ruinous Minotaur, which soon blocked and traded with Nissa’s Chosen when Golia continued his attacks. Golia had a Grazing Gladehart to follow, and a Vines of Vastwood to protect it from Punishing Fire.

For the second game in a row, Soh had a Paralyzing Grasp to stop River Boa. The difference now was that he was facing bigger threats, with fewer of his own to fight back with. Golia dropped successive hammer blows in the form of Territorial Baloth then Terra Stomper.

“Wow, quick game” remarked Soh as he scooped up his cards. 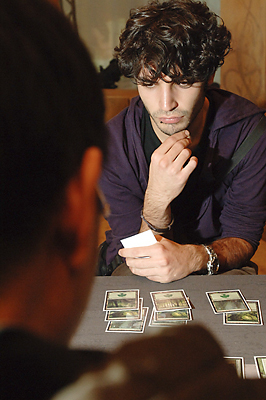 For Italy, Patrizio Golia is its last great hope for Top 8.For the third game, Soh looked on as his opponent took a mulligan to six on the draw. The Malaysian led out with a Goblin Shortcutter which was matched by Oran-Rief Survivalist from Golia. Soh tried to kill it after it had attacked him using Punishing Fire only for Primal Bellow to thwart that plan. Golia cast a Turntimber Basilisk to which Soh had an Aether Figment.

A Harrow from Golia meant that Turntimber Basilisk could kill two creatures while losing its own life. That left Golia with the only creature on the board in his 2/2 Ally, and gradually attacked Soh down to 12. Golia tried an end of turn Baloth Cage Trap, but it was stopped by an Into the Roil (with kicker) on the token. The bounce spell deployed, Golia felt safe to cast a Savage Silhouette on his Survivalist.

Soh cast a Merfolk Seastalkers to stall the ground, but was forced to block with it when a kicked Vines of Vastwood stopped his original plan of tapping his opponent’s creature. From there, Terry went with Paralyzing Grasp to stop the Ally. This was all well and good but Golia had plenty of dangerous fatties still to deploy. Terra Stomper and Baloth Woodcrasher joined team Italy and made certain that Golia would continue to represent on the high tables in his home country.