Marijn Lybaert, still undefeated at 11-0, fought Pro Tour veteran Bram Snepvangers at the tail end of Day 2 of Worlds. The two Dutch speakers chatted amicably while shuffling. Lybaert was looking to repeat his perfect performance of yesterday, while Snepvangers sought an entry to the final day of individual play tied for the lead with 33 Swiss points.

Lybaert’s luck faltered and he was forced to mulligan his first hand. Snepvangers kicked it off with a turn two River Boa, but Lybaert’s Kazandu Blademaster was a solid barrier to the Snake’s path to damage. Snepvangers, on three Forests, passed it back with no play and Boa back to block. 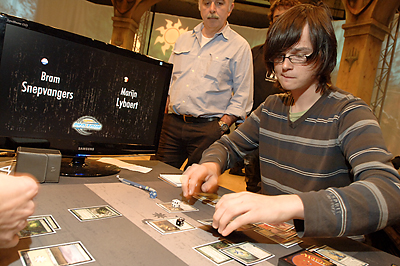 Marijn Lybaert vies for the longest undefeated streak at the World Championships.Lybaert had Makindi Shieldmate to grow the Blademaster, but could not profitably attack into the Boa. Both laid their second colors, white for Snepvangers and red for Lybaert, and began a staring contest. Snepvangers was the first to blink with a Territorial Baloth, but Lybaert had the Inferno Trap to take it down on his opponent’s end step. With Snepvangers tapped out, Lybaert rumbled in with the 3/3 Blademaster (20-17) and played an unkicked Conqueror’s Pledge for 6 Kor Soldier tokens.

Lybaert had the Journey to Nowhere next turn to remove the Boa from blocking duty, and his full attack took Snepvangers down to 9. He lost a token in the process to the Recluse, but refilled the board to capacity with Steppe Lynx and Cliff Threader. Snepvangers returned fire with another Oran-Rief Recluse and a Greenweaver Druid.

Kor Hookmaster continued the pressure, and with one Recluse locked down, Snepvangers was forced to chump with the Druid and go down to 4 on Lybaert’s next attack. Another draw step yielded no answers, and Lybaert’s horde of white creatures took the Dutch player down.

Lybaert was first on the board with a turn two Highland Berserker, but the beatdowns seemed quickly shut down by an Oran-Rief Recluse. Lybaert’s follow up ally – Makindi Shieldmate – did not quite continue the aggression. 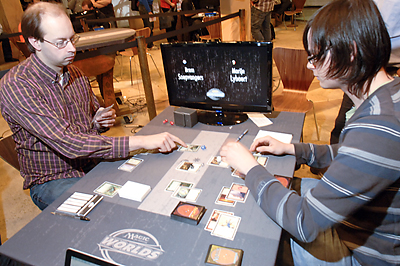 Sharing a language didn’t stop these competitors from playing hard.With five Forests, Snepvangers’ Timbermaw Larva threatened to go quite large. Lybaert cast a Kor Skyfisher returning the Highland Berserker and then recast it. Snepvangers was content to lay another Forest and swing for 8, taking Lybaert down to 12. He then laid another boom-boom in Territorial Baloth, and suited it up with Gigantiform. The following turn a land entered the battlefield under Snepvangers’ control. The now-10/10 trampler and 9/9 Larva friend crashed in and brought Lybaert to 2 life and two creatures.

It only took one more peek at the top of the deck for Lybaert to shrug and give the game to Snepvangers.

Lybaert took his second mulligan of the match, but seemed okay with his hand of six. Snepvangers again had a River Boa, and on Lybaert’s third turn, history continued to repeat with a Kazandu Blademaster, only a turn late to the party.

Snepvangers’ Greenweaver Druid met an Inferno Trap, and the Dutch player showed just how much it hurt when he was forced to pass without another land drop. Lybaert, lacking serious aggression in the face of the River Boa, kicked into Plan B: Luminarch Ascension. Kazandu Blademaster played defense just as well as offense. 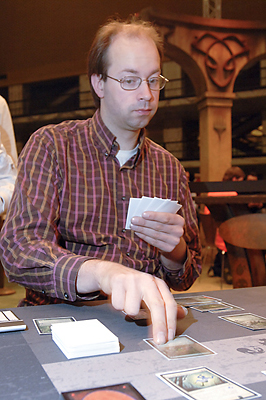 Bram Snepvangers hungered for another win, eye on the Top 8.Unable to get damage through, Snepvangers committed more and more resources to the table – a Timbermaw Larva, an Oracle of Mul-Daya, and many more lands. Lybaert had a crushing reply, however: Conqueror’s Pledge. Six Soldiers readied themselves to defend the aspiring Luminarch; Snepvangers was not pleased.

Lybaert’s Ascension ticked to two counters, and it appeared the home stretch for the undefeated player was near. Snepvangers had a solution waiting, however: Gigantiform on his Timbermaw Larva. The 11/11 smashed in and Lybaert had no way to stop the trampler. The Belgian went down to 9, but more importantly, he didn’t get a third counter on his Ascension.

Knocking the top of his deck, Lybaert drew and found a Makindi Shieldmate, bringing his total toughness to 15. He elected to attack with a newly cast Cartographer and the aforementioned vigilant Blademaster into the untapped Boa and Oracle. This brought his Dutch opponent to 13, and he left back a still considerable 13 toughness.

Lybaert was clearly pinning his homes on another draw step to find Journey to Nowhere. But when Bram swung in with the ever growing 12/12 Larva alongside River Boa and showed Primal Below for lethal, Lybaert was left without any time left to find his answer.